Arizona State’s Mason Andersen came up with big shot after big shot and was a key figure in the run to the championship for the men’s golf team. (Photo by Chris Nano/Cronkite News)

SCOTTSDALE – Arizona State’s David Puig had one thought as the Sun Devils prepared to play for a national title in men’s golf.

“We’re excited, and there’s this phrase in Spanish where we say ‘You don’t play finals, you win finals,’” the Spaniard said about the popular phrase coined by Real Madrid legend Alfredo Di Stefano. “And that’s what we’re really gonna try to do, win the final.”

ASU will secure its third national title if it can defeat Texas Wednesday at Grayhawk Golf Club. Its last title came in 1996. Although this program has seen significant success, a championship has escaped some of its top players, including Jon Rahm.

ASU advanced by defeating the top-ranked team in the country, Oklahoma, and the defending champion, Pepperdine.

Grayhawk has proven to be a tough par-70 course that did not allow a single team to shoot under par in the first round of the tournament.

“Well, I’ll just say it’s extremely difficult out there,” ASU coach Matt Thurmond said after that first round, “It is just an absolute grind. There’s nothing easy. … No matter what you do, you’re fighting for pars.”

Despite playing the role of host, the Sun Devils did not have an easy start and struggled at times Friday and Saturday. But they performed their best during Sunday’s stroke play, shooting a combined 3-under to move up to sixth place.

Cameron Sisk (2-under) and David Puig (2-under) delivered for ASU, but freshman Preston Summerhays did too, joining the two veterans and also recording a 68.

The Sun Devils had only one day left of stroke play, and that would decide if they moved up to match play on Tuesday, or if they would be eliminated. To remain in contention, ASU needed to be among the best eight teams in the leaderboard, and they did just that. 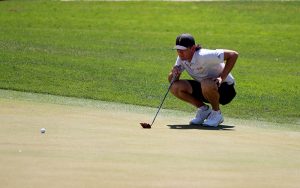 Despite recording a worse round than Sunday’s, it was enough to become the seventh seed of the tournament. That was in part because of the great effort by Sisk, who finished tied for fifth in the individual rankings.

The best was yet to come.

After the initial rounds, ASU was paired with the Oklahoma Sooners, the top ranked team in the country by Golfstat, and the team that knocked off the Sun Devils in the 2021 National Championship, also played at Grayhawk.

Match play began at 6:20 a.m. and it was an intense round. Each team recorded two of the three victories needed to advance to the semifinals. For ASU, fifth-year senior Mason Andersen defeated Patrick Welch. Meanwhile, Summerhays obliterated Haskins Award winner Chris Gotterup by a 7-hole differential, not even playing the last five pins.

The Sooners added points to their win column as Drew Goodman and Logan McAllister defeated the two Spaniards, Puig and Josele Ballester.

Then, it came the moment for Sisk to play hero.

In back-and-forth fashion, the senior gave up his lead at the 16th hole, then retook it at the next one, but lost it again at 18. That led to a playoff round at hole 10, where he took care of business after sinking a putt (which rattled around the pin before going in) and seeing his rival, Stephen Campbell, miss his shot to give him the victory.

“He was probably like 25 or 30 yards behind me, and he hit a really, really good shot, like 7 or 8 feet.” Sisk said. “I thought I had a great shot, too. I was probably about 15 feet, and it broke pretty good. I had a really good putt, and to see that, you know, curl around a little and go in, it was so awesome.”

It was all hugs and celebration after that putt, but little time remained to savor the victory. About 10 minutes after their dramatic quarterfinals, the Sun Devils learned that defending champion Pepperdine defeated No. 3 seed North Carolina, and that they would face them in the semis.

At 12:45 p.m., the competition began with Andersen, who was facing Dylan Menante.

The fifth-year player was up one through 12 holes, but in the next four he dropped to trailing by two.

However, Andersen came through in the clutch, and birdied 17 and 18 to force the second playoff of the day, returning again to 10. The Chandler native let out his emotions even before securing the tie, when he put the ball closer to the pin than his rival and was yelling repeatedly, “Get in!”

Then, at 19, the graduate secured the victory after his rival missed a 5-footer. He sank his putt, throwing his arms up when he knew he had delivered one of the most memorable comebacks in ASU golf history.

“I just kept saying, ‘One shot, one shot, one shot,’ and it just kept happening,” Andersen said. “I mean, every shot that I wanted to hit down the stretch, ended up hitting, so that was really cool. In the playoff hole, he kinda threw me a bone in that one, he missed his 5-footer.” 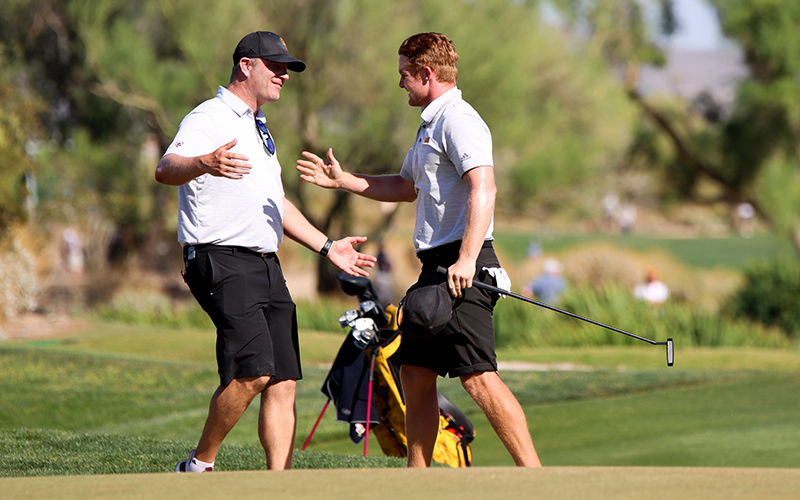 The semifinals were all about momentum, and that was something Andersen almost lost right before that 19th hole. When both players went up to the tee box at 10, two players from the other semifinal (Texas and Vanderbilt) were still underway, which caused Andersen and Menante to wait for 15 minutes.

“Annoying, it was annoying,” Andersen said. “I really wanted to just keep it going, because when you get in a rhythm like that, it’s bothersome. But it gave me a chance to kinda watch my boys on the big screen out there, so not everything was bad.”

However, Andersen was not the only ASU golfer who was in danger of losing momentum. Although Summerhays had a 5-hole lead through 10, it was tied up 16..

The freshman did not let nerves get the best of him, and he was able to retake the lead at 17, securing the victory in the last hole.

“A freshman in that situation … most would be completely reeling, and they’d be done, but for Preston to rally like he did,” Thurmon said. “I mean, that’s so hard to do when all the momentum is gone, and you hit shots like that in those moments. Thrilled for him, he beat two great players today.”

“So proud (of Preston Summerhays),” Andersen said. “Preston is legit, and he’s been legit since day one. You can always tell when a player is gonna be great, and Preston is one of those guys.”

With those two victories, ASU only needed one more to secure its spot in the final. It was all over when Puig won the 17 hole and ended his match with the 2-hole lead right before the final pin.

“It was the referee on the 14th fairway,” Sisk said about who told him the match was over. “Yeah that was insane, you know, those guys made it easy on me today. Those first first matches to close it out, it was awesome.”