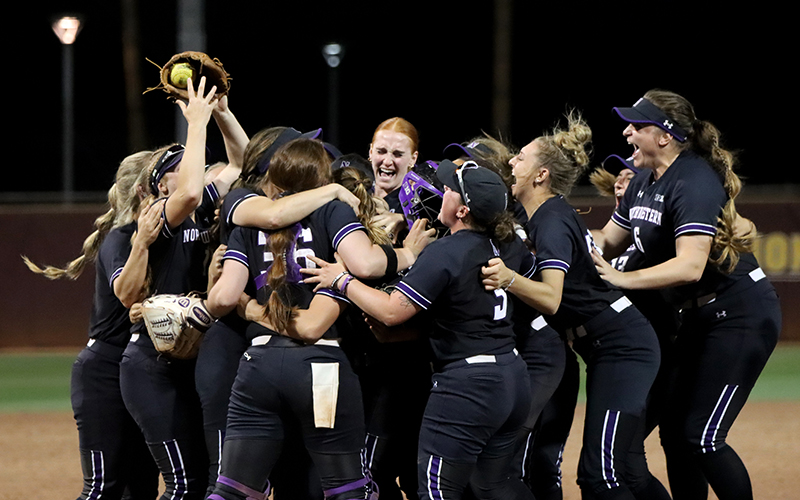 It was a special night for the Northwestern Wildcats, who emerged victorious Sunday after three hard-fought games against Arizona State in the Tempe Super Regional. (Photo by Chris Nano/Cronkite News)

Arizona State was a tightly bonded team throughout a softball season in which it was predicted to finish fifth in the Pac-12 Conference. (Photo by Chris Nano/Cronkite News)

TEMPE – It was a wild weekend at Farrington Stadium as the Arizona State softball team hosted a super regional round of the Women’s College World Series. Over 2,000 fans were on hand to witness the penultimate event.

After 26 innings in three games, the Northwestern Wildcats prevailed and punched their ticket to Oklahoma City, ending a historic season for Arizona State.

“There’s not really an easy way to go about this,” ASU coach Trisha Ford said. “We had a phenomenal year: Pac-12 champs, the right to host regionals and super regionals. You got to live and learn from it and get better from it.”

In a year where the Sun Devils lost three starters, including Kindra and Maddi Hackbarth (who both earned multiple All-America honors), ASU was picked to finish fifth in the conference.

For the first time in program history, ASU won 20 games against conference opponents. The Sun Devils won the regular season title for the first time since 2011. Once they entered the rankings after week one, Arizona State never dropped lower than 25th in the country on D1Softball.com.

A 20-game win streak between the end of the non-conference schedule and Pac-12 play was what the squad used to propel itself s to a No. 8 national seed in the Women’s College World Series.

All three games in the Tempe Super Regional were dogfights. For just the second time in WCWS history, the first two games of the super regional went into extra innings.

Despite scoring first and having a lead in all three matchups, the ASU offense eventually went quiet and allowed Northwestern to climb back each night. The main culprit of that was Big 10 Pitcher of the Year Danielle Williams. 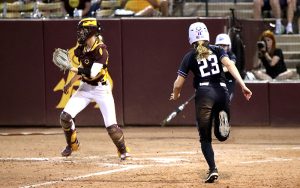 ASU’s Jessica Puk waits for the throw as Northwestern’s Sammy Stanley charges to the plate in a super regional game at Farrington Stadium in Tempe. (Photo by Chris Nano/Cronkite News)

Williams is no stranger to throwing a lot for the Wildcats. She has been their workhorse all season. Over the course of the weekend, Williams threw 430 pitches and recorded all but eight outs.

“She faced (ASU’s) tremendous hitters how many times? Ten, 11, 12 times? Even more than that, with extras?” Northwestern coach Kate Drohan said. “I was really impressed with Danielle’s poise and the adjustments that she made throughout the game. The way she was able to keep them off balance and trust her defense and continue to be aggressive. She gave her everything and had no problem.”

ASU homered six times off Williams, the most of any team all year. The Sun Devils broke the single season team home run record (now at 104 homers), but that was not enough.

The Arizona State loss in the winner-take-all game three also closed the book on the storied career of Bella Loomis, who finished her fifth season in Tempe. Loomis, a Hamilton High School product and Chandler native, made big play after big play at third base in the super regionals.

“Wow, it’s been the best five years,” an emotional Loomis said. “I’m just so grateful for Coach Ford and all the coaches. I’ve become such a better person from being here and I wouldn’t want to be anywhere else finishing my career. I love playing here. This team is so special. We love each other so much. We’re gonna go far next year and two years after that, I’m just so proud and so grateful.”

While the Sun Devils could not get the job done, a team from Arizona will still be represented in Oklahoma City. The University of Arizona won both of its games against Mississippi State, advancing to the WCWS for the second straight year and 25th time in program history.

The Wildcats are 5-0 in postseason play under first year coach Caitlin Lowe. They will get an opportunity for their ninth Women’s College World Series title, in what many considered to be a “down” year for the team with an 8-16 conference record.

UArizona will begin its Oklahoma City campaign Thursday against No. 7 Oklahoma State. It is one of three remaining teams from the Pac-12, along with Oregon State and UCLA.