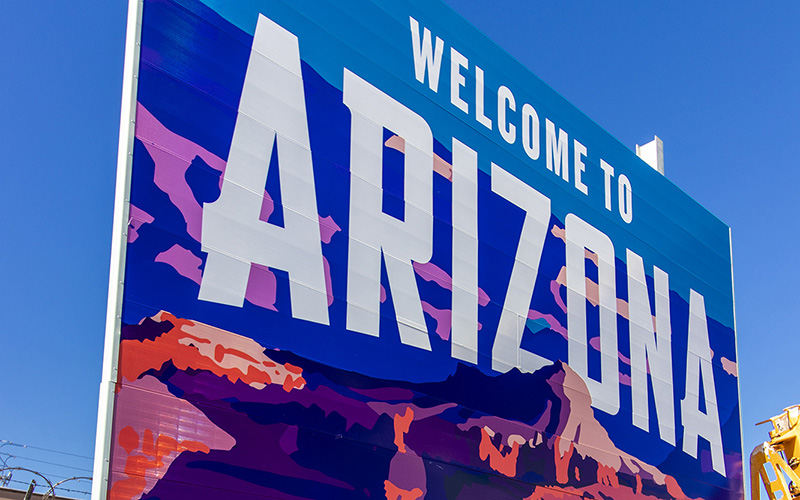 Five Arizona cities – Queen Creek, Buckeye, Casa Grande, Maricopa and Goodyear – were among the top 15 cities in the nation for population growth rate from July 2020 to July 2021, according to the Census Bureau. No large city in the state saw a population decrease during the pandemic-wracked year, the new numbers show. (Photo courtesy Arizona Department of Transportation)

WASHINGTON – Arizona had five of the 15 fastest-growing cities in the U.S. last year while Phoenix continued to add residents, bucking the trend of major cities that lost population during the pandemic, according to the Census Bureau.

Census data released Thursday showed Queen Creek, Buckeye, Casa Grande, Maricopa and Goodyear all grew at rates ranging from 5.4% to 8.9% between July 2020 and 2021. The report also said Goodyear and Buckeye were among the six cities nationwide that topped 100,000 residents last year, with populations hitting 101,733 and 101,315 respectively.

“We are growing and growing quickly, considering that Buckeye was under 7,000 people in the year 2000,” said Deanna Kupcik, president and CEO of the Buckeye Valley Chamber of Commerce.

Buckeye’s growth rate of 8.6% was fourth-highest in the country, right behind Queen Creek which grew by 8.9% to 66,346 residents last year.

The Census said close to half of the 795 U.S. cities with 50,000 people or more lost population last year, but none of the 20 Arizona cities on the list posted a loss. Flagstaff saw the smallest percentage growth, adding 29 residents to bring its population to 76,989.

When asked what was driving the growth of their cities, officials across the board pointed to quality of life issues.

Arizona again ranked near bottom of states for per pupil spending, Census says

“Beyond prioritizing transportation and public safety, we are furthering the quality of life through our wash trail system and expanding parks and recreation opportunities,” said Kross, adding that the city is also focused on attracting more large-scale employers to provide jobs for residents.

Phoenix, not surprisingly, added the largest number of residents in the state last year, but the extra 13,224 residents amounted to a growth rate of 0.8%. But of the 10 biggest cities in the country, only Phoenix and San Antonio saw population gains. All the others lost residents, led by New York City’s loss of 305,465.

“The quality of life here is exceptional and combines with smart policies and a welcoming business operating environment to deliver a diverse ecosystem of opportunities in which workers can obtain high-quality jobs and families can thrive,” her statement said.

“We are excited for the businesses that have chosen Casa Grande as their base,” said Renée Louzon-Benn, executive director at the chamber of commerce in Casa Grande, which grew by 6.2% last year, to 57,699 residents. That was the seventh-biggest percentage increase in the country.

Louzon-Benn pointed to electric vehicle manufacturer Lucid motors, which established a plant within the city last year, and Kohler Co., which is scheduled to open a plant in Casa Grande. Best known for its plumbing products, Kohler also makes furniture, cabinetry and tile.

Growth comes with its challenges. Louzon-Benn said the planned widening of Interstate 10, currently just two lanes in each direction between Casa Grande and Chandler, should help both residents and businesses in the area.

Realtor Steve Larson, a longtime Buckeye resident, said the city is “growing exponentially, one of these days we are going to be a major city in Maricopa County.” That optimism is backed up by a report from the city that projects Buckeye could triple to as many as 305,000 by the year 2040.

Larson said that for those looking to move to the area, the housing “market is back to normal” – for now. COVID-19 made it difficult for home builders and sellers, but with the pandemic waning the possibility of rising interest rates could create challenges for homebuyers again.

“For people making the move, we have gotten spoiled with low interest rates,” he said.

But growth comes with its benefits, too.

“I was born and raised here and started in the chamber of commerce in 1988. The biggest want … from our citizens was grocery stores.” Kupcik said. “Before we used to drive east to Goodyear or further.”

Now, she noted, Buckeye has two Fry’s, a Walmart and an Aldi.

Kross said the population growth is proof that cities’ investments are paying off.

“All of these investments and plans, along with the diversity of housing, continue to make Queen Creek a desirable place to live, and we’re seeing that continue through the recent census numbers,” he said.