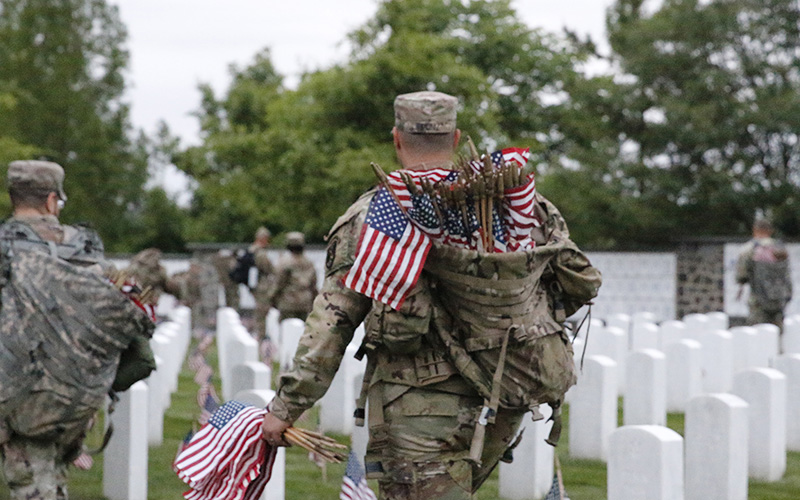 More than 1,200 people, including about 1,000 members of the military and 200 volunteers, participate in the “Flags-In” ceremony at Arlington National Cemetery, decorating graves in preparation for Memorial Day. (Photo by Morgan Fischer/Cronkite News) 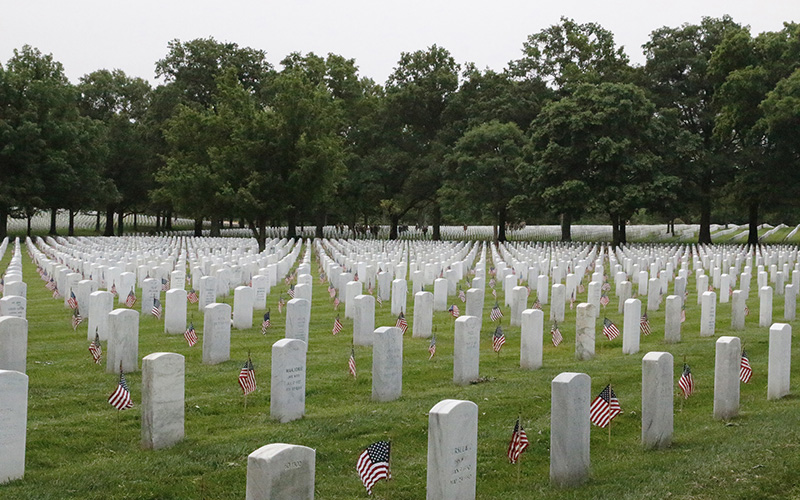 Arlington National Cemetery, on 639 gently rolling acres across the Potomac River from Washington, is the final resting place for more than 260,000 individuals, with as many as 30 new burials every weekday. (Photo by Morgan Fischer/Cronkite News) 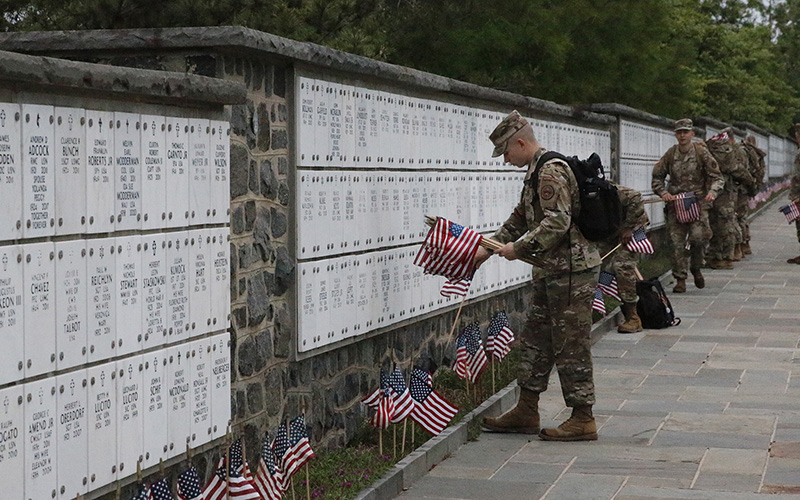 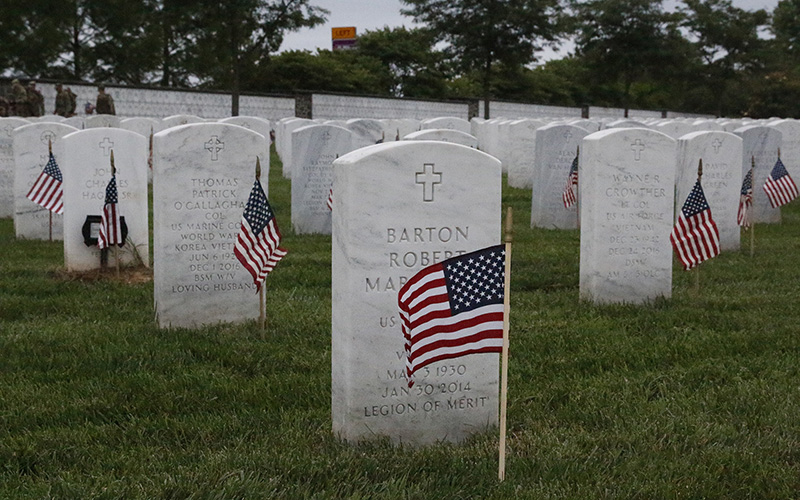 The “Flags-In” ceremony at Arlington National Cemetery has been going on for decades, with soldiers, sailors and volunteers gathering annually to place flags in front of a quarter-million graves in a matter of hours. (Photo by Morgan Fischer/Cronkite News) 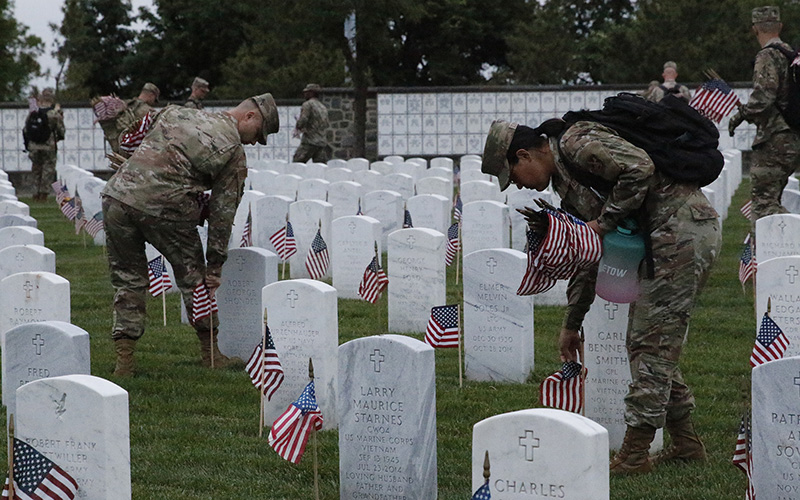 Soldiers and volunteers carrying bundles of flags spread out through the rows of graves at Arlington National Cemetery, use a boot to measure the distance from a headstone to place a flag, then move on to do it again. (Photo by Morgan Fischer/Cronkite News) 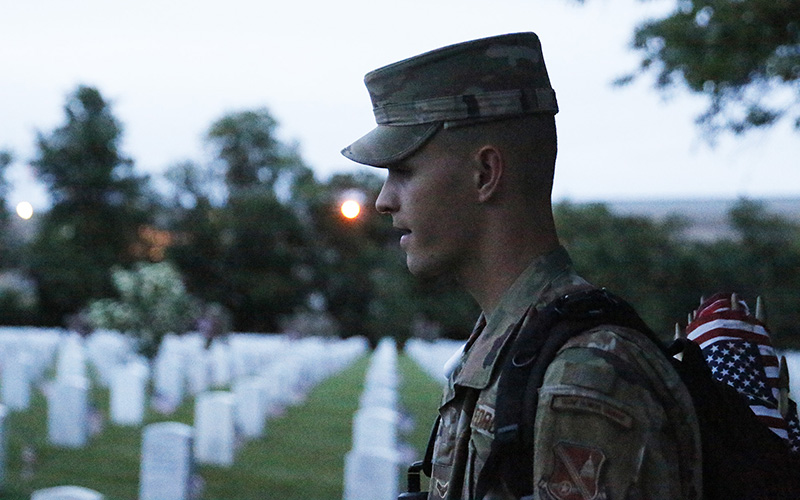 Airman 1st Class Connor Zierse, a former Buckeye resident, took part in the “Flags-In” ceremony at Arlington National Cemetery for the first time this year. He said it helps him feel he’s making a difference. (Photo by Morgan Fischer/Cronkite News)

But Thursday was different.

The former Buckeye resident was one of almost 1,200 people, both soldiers and civilians, at the cemetery early Thursday to take part in the annual “Flags-In” ceremony, walking the rows to place small American flags in front of the more than 260,000 graves in preparation for Memorial Day.

“I am a very small part, but I definitely feel like I am making a difference,” said Zierse, 19, who attended Freedom Elementary in Buckeye and joined the Air Force right after graduating from high school.

This year’s ceremony began at 5 a.m., as the sun peeked over the horizon and lit the seemingly endless rows of headstones on the gently rolling fields.

It was a military operation with a decidedly relaxed – even reflective – tone. Soldiers wearing backpacks stuffed with flags began moving down the rows of pristine white headstones, putting a boot against each headstone to measure the distance to where they should plant the flag, then moving on to the next one.

As they place the flags, the soldiers take a moment to pay tribute and commemorate those who served before them. Army Sgt. Elliot Johnston, a Toledo, Ohio, native taking part in this year’s ceremony, said the opportunity to place flags for the people that came before him “filled me with joy.”

“When I place a flag, I think of the sacrifice, I think of the bravery and the courage that must have been on display, the test of fortitude that that individual had in that moment,” said Katz, a member of the 4th Battalion of the Army’s Old Guard.

Since 1948, the Flags-In ceremony has been led by the 3rd Infantry Regiment of the U.S. Army, or the Old Guard, which is the oldest active-duty infantry unit in the Army and is based in nearby Fort Myer, Virginia. But members from all branches of the service, like Zierse, can volunteer.

Arlington National Cemetery was founded in 1864 and is the final resting place for American veterans from every war since the nation’s inception. The cemetery conducts more than 3,000 funerals every year.

For Memorial Day, flags are placed in front of more than 260,000 headstones and at the bottom of each column of niches in columbaria where urns have been placed.

The whole process takes about four hours to complete. The flags will be removed Tuesday, the day after Memorial Day.

Until then, Katz hopes that Americans across the country will pause in their Memorial Day activities of barbecuing and spending time with family and friends to remember fallen service members.

For Zierse, who joined the Air Force about nine months ago to have his education paid for and set up “a good life for my family,” Flags-In was not only a chance to honor the fallen but also to connect with home. He said that during funerals he will “look out for those places to see people who were also from Arizona,” which connects him to the fallen.

“It’s been a huge, huge change for me, being away from family and everything,” Zierse said. “But it’s been awesome.”