Phoenix Mercury coach Vanessa Nygaard has faced a lot in her first season, including the imprisonment of star player Brittney Mercury. Others have missed games with health and injury issues. (Photo by Chris Coduto/Getty Images)

PHOENIX – A first-year head coach. A verbal sideline confrontation between two superstar teammates. A season sweep by the best team in the WNBA.

And surely most significant, a player jailed overseas indefinitely.

The Phoenix Mercury have struggled to start the 2022 WNBA season, opening with a 2-4 record following three losses to the top-seeded Las Vegas Aces (6-1) in the first month of the season. It is the team’s worst start since their 2019 season, when the Mercury began 2-5 and finished with a 15-19 record.

“We are all getting to know each other. We have a couple of players, like Diamond (DeShields) and Brianna Turner, who just showed up like seven days ago,” Mercury coach Vanessa Nygaard said on May 11th. “That’s a quick learning curve, with a lot going on on a day-to-day basis.”

Nygaard was offered the Mercury job in January, after the team spent a month searching for a replacement. Sandy Brondello, the team’s previous coach, did not have her contract renewed after the team reached the WNBA Finals last season. Like Nygaard, Brondello was up on her feet a month later, as the new coach of the New York Liberty.

Since then, the Mercury franchise has had a whirlwind off-season. The team traded backup center Kia Vaughn for a third round pick in next year’s WNBA Draft. They re-signed fan favorite 3-point spot up shooter Sophie Cunningham and backup point guard Kia Nurse to one-year deals. And they made two major transactions to bolster their present-day starting lineup: one, via trade and the other, a free-agent signing.

The Mercury signed eight-time All-Star and 2012 regular season MVP Tina Charles to a one-year, $108,000 contract – a sensible offer for the 11-year pro, who averaged a career-best 23.4 points per game in 24 games started for the Washington Mystics a year ago. She was the primary option for the Mystics since their franchise player, Elena Delle Donne, only started three games last year after re-injuring her chronic back and missed a majority of the season. 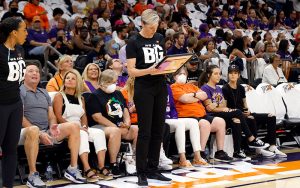 Just 10 days after Nygaard was introduced as the Mercury coach, the team was involved in a three-team sign-and-trade that saw reserve guard Bria Hartley (who played in only six games for the team last season) depart to the Indiana Fever. The Mercury also sent second round picks in the 2022 and 2023 WNBA Drafts to the Fever and a 2023 first round pick to the Chicago Sky. In return, the team obtained versatile wing Diamond DeShields from the Sky.

“DeShields is as dynamic an athlete as we have in our league and at just 26 years old has already been a champion, an All-Star and an All-WNBA performer,” Mercury general manager Jim Pitman said in a February press release. “She was one of our top targets this offseason because of her ability to score and defend from the wing position and how dangerous she is in the open floor. We are thrilled to add Diamond to our All-Star core.”

Little did Pitman know the unfortunate circumstances that followed the three-team trade.

Two weeks after the deal, the team’s star starting center in Brittney Griner, who was playing overseas for Russian powerhouse women’s basketball team UMMC Ekaterinburg, was arrested at an international airport in Moscow for carrying a vaporizer containing hashish oil, a banned substance on Russian grounds. To this day, Griner remains behind bars – this Friday would be her 100th consecutive day in the jail cell.

Guard Kia Nurse’s torn ACL that she suffered last October resulted in another Mercury starter ruled out to start the 2022 season. To add on, the team was without two other starters in DeShields and Turner on opening day, as both were completing overseas play. Both rejoined the Mercury following the team’s 106-88 blowout loss to the Aces in the first game of the season.

“This is my first rodeo and I think that it is a challenge to begin the year,” Nygaard said. “Tina (Charles) is new as well so it’s really just Skylar (Diggins-Smith) and Diana (Taurasi) that have played together significantly. We saw Sophie (Cunningham) play some great minutes for us today as well. We just have to sort it out. The good thing for us is that we have games coming up, so we’ll have an opportunity to keep working and I know those players want to get back on the court.”

The Mercury started the season 2-1, with a home-and-home sweep of Sue Bird’s Seattle Storm earlier in May. During that stretch, the new big three of Taurasi, Diggins-Smith and Charles averaged a combined 43/39/76 field goal, 3-point and free throw splits and a healthy 49/19/11 points, rebounds and assists per game.

Then came the Mercury’s current three-game losing streak, which featured two losses to the Aces and another loss to the young Dallas Wings squad (average age of their current roster: 24) sandwiched in-between.

In that span, a verbal sideline outburst between the team’s two star players – Taurasi and Diggins-Smith – occurred during the first half of the second Aces game.

Skylar Diggins-Smith and Diana Taurasi had to be separated after a heated exchange on the bench. pic.twitter.com/QGCghYuHAf

Cooler heads prevailed, but the Mercury dropped their second straight game to the Aces. The Mercury scored a season-low 12 points in the third quarter, as they could not get any dribble penetration and quality looks. The Aces took advantage behind their defensive intensity with a 30-12 run in that quarter alone.

The nationally televised game on ABC on Saturday afternoon against the Aces put a spotlight on their defensive woes. Four Mercury players – Turner, Charles, DeShields and Cunningham – had four fouls apiece heading into the fourth quarter, in flailing attempts at guarding the likes of A’ja Wilson, sharpshooter Kelsey Plum and guard Jackie Young.

“This is the group that we have, and you have got to be able to find solutions to defeat really good teams,” Taurasi said following the team’s third straight loss. “We’re not going to make any excuses – we’ve played basketball for a long time. So it doesn’t matter who you are on the court. It’s just one of those days that things aren’t going your way. And so we’ve got to find a way to make sure we’re staying true to the things that we need to get done to be successful. I thought we had a pretty good first half, so the ability is there. We just need to be able to do it for a longer period of time.”

Taurasi was not too pleased about facing the Aces for the third time in the first six games of the season, with two of those games in Sin City.

“I’m glad we don’t see him for a while,” Taurasi said. “That’s for sure. I’m tired of Vegas food. It’s pretty crappy.”

The Mercury were playing without Taurasi’s backcourt mate in Diggins-Smith, who missed her second consecutive game – not because of her feud with Taurasi, the team said, but with a non-COVID illness – another blow for a team attempting to return to the WNBA Finals.

The Mercury have faced a collection of defensive woes this season:

“We all are still getting used to each other, teaching each other,” Diggins-Smith said. “I just got our system down last year, and now we learned a whole new system. So, it just is what it is. So, there’s no excuses on our part. You shouldn’t have to coach effort or energy on us, and I think we have to start that fourth quarter punching somebody in the mouth and not the other way around.”

The Mercury will attempt to rebound Wednesday, as they face Nneka Ogwumike and the Los Angeles Sparks at crypto.com Arena. Tip-off is at 7:30 p.m., and streaming on Amazon Prime Video.