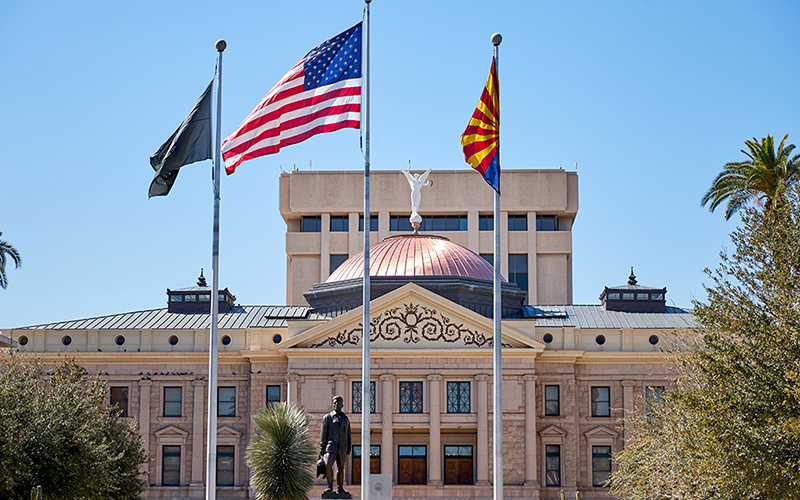 A new Arizona law will give those with a criminal background a chance to seal their records, which may expand access to jobs and housing – but the complexity of the process and longevity of online information may hinder the law’s impact. (File photo by Alex Gould/Cronkite News)

PHOENIX – A new state law is expected to give Arizonans with criminal backgrounds a chance to shield their records from public view, improving access to many opportunities, including public housing assistance.

The law, which goes into effect Jan. 1, will give people a chance to successfully reenter society by permitting them to seal their criminal records under certain circumstances. But the complexity of the process and longevity of online information may hinder its impact.

The law is the third effort by Arizona to give people with criminal records a second chance.

In 2020, Arizona voters approved Proposition 207, called the Smart and Safe Arizona Act, legalizing the use of recreational marijuana and creating a process for minor marijuana offenses to be expunged from an individual’s records.

Last year, the Legislature passed a law allowing Arizonans to “set aside” their criminal records. A set-aside can dismiss the legal penalties that come with having a record, such as being barred from owning a firearm or getting a license for certain jobs.

S.B. 1294 goes further, allowing people to petition to seal criminal records from public view, with the exception of serious offenses.

When a marijuana record is expunged, that record is accessible only by that person and his or her attorney.

Sealing a record will hide it from most everyone, except for certain parties, such as law enforcement for public safety purposes.

In contrast, a record that has been set aside still can be viewed by anyone, including government agencies, employers and landlords.

J.J. Prescott, a criminal law professor at the University of Michigan, described record clearing as a continuum of policies, “from fully available to complete destruction.”

Under the new law, Arizonans can petition the court to seal their criminal records if they have completed all terms of their sentence. The law also applies to arrest records and charges that were dismissed or resulted in a “not guilty” ruling.

The law comes with a waiting period after the completion of a sentence or parole – a minimum of two years for misdemeanors and five years for felonies and may involve additional court fees.

Some criminal records, including for violent or aggravated felonies and sexual offenses, can’t be sealed at all.

In an email, Toma said that limiting the types of records that can be sealed “preserves public safety” while still allowing people with a criminal background to “pursue a clean slate.”

But for those who are eligible, a lack of information or resources may be a stumbling block.

The Maricopa County Attorney’s Office said in March that it had filed more than 10,000 petitions for the expungement of marijuana-related cases since Proposition 207 took effect. It’s unclear how many more people are eligible. The FBI reported nearly 140,000 marijuana possession-related arrests were made from 2010 through 2020 in Arizona.

Toma said the new sealing process is intended to be fairly straightforward so that a petition can be filed without the need for a lawyer.

“Virtually anyone should be able to do it on their own,” he said.

But Maxine Becker, an attorney for Wildfire Community Action Association of Arizona, said that with a law like this, most people might not be aware they will be eligible to have their records sealed – and even if they are, they might not have the time or money to do so.

“It’s not going to be a magic wand in January,” Becker said.

Although many advocates and experts can speak anecdotally about the impact of record-clearing legislation, measuring the results of these laws is difficult. With records being hidden from public view, it is difficult for researchers to analyze how record clearing affects a person’s life.

In 2020, Prescott and his colleague, Sonja B. Starr, now at University of Chicago, were able to analyze criminal and wage data of expunged records in Michigan against records that were not expunged. They found that people who obtained expungement have lower subsequent crime rates, earned higher wages and had better job opportunities than those who had not expunged their records.

The study did not evaluate the impact of expungement on housing, but with the rental market being so competitive, Becker said, just having a criminal record is enough to hurt an applicant’s chances of finding a place to live.

“There is so much competition that if you have a criminal record, someone else who doesn’t is going to have preference,” Becker said.

The new Arizona law requires time and resources, barriers that can prove to be significant. Prescott and Starr found that of those eligible for expungement in Michigan, fewer than 7% obtained it within five years in the state’s petition-based system.

“A petition-based process means that nothing will happen with your record unless – and until – you ask. There are some barriers to that” Prescott said. “The process itself may be complicated. It may be scary; it may be expensive.”

The law gives the Arizona Department of Public Safety the authority to charge fees to process record sealing. The state Supreme Court, which sets the technical details of all Arizona court processes, has yet to publicly share forms, processes or fees. But in neighboring Nevada, the cost of sealing records can be thousands of dollars.

And even if criminal records are cleared, Prescott said, privately owned data companies can make it difficult to ensure a person is ever truly free of their record.

The Fair Credit Reporting Act sets accuracy and transparency requirements for background screening companies, as well as landlords and employers who use criminal background and credit checks to screen applicants.

But according to Lageson at Rutgers, there are thousands of “people-search websites” that collect data and do not comply with the credit reporting rules. Each company may keep records even after they have been sealed.

“There’s this whack-a-mole problem,” Lageson said. “You have to go from source to source to ensure that your record is sealed.”

Despite the limitations, Becker sees the law as a big step toward potentially helping a lot of people.

“If you’re in a spot where you need to use this law, you’ve been on a tough road,” Becker said. “But you know what, as a state, we’re not giving up on you. And I think that’s a significant message for people.”