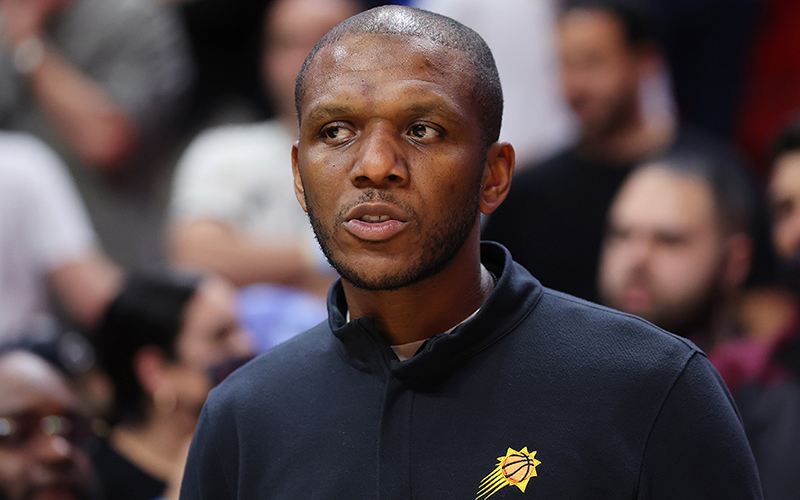 James Jones, the general manager of the Phoenix Suns, is facing numerous offseason questions, including, “What is the future of Deandre Ayton”? (Photo by Michael Reaves/Getty Images)

PHOENIX – After the Phoenix Suns were eliminated from the NBA playoffs in a blowout loss to the Dallas Mavericks, the team and fans had to shift to offseason mode.

And the mode includes contemplating the future of Deandre Ayton.

“Deandre had a great and really productive season,” Suns General Manager James Jones said. “I think if you look across the board, he improved. That’s a testament to him and his hard work. That’s what you expect from a player of his caliber.”

A former first overall selection by the Suns in 2018, Ayton averaged 17.2 points and 10.2 rebounds per game in 29.5 minutes during the 2021-22 regular season. He ranked within the top 10 in both categories among all NBA centers.

The last day the Suns can give Ayton a qualifying offer (to make him officially restricted) is June 29, but the opportunity for a max extension is still there. The two other centers on the Suns roster, JaVale McGee and Bismack Biyombo, are unrestricted free agents this summer.

“As far as free agency, we will address it at the proper time,” Jones said Wednesday. “We want to continue to keep our consistency, our continuity, and keep the guys that we have and continue to help those guys improve upon the things we did this year.”

After mulling over the season-ending loss for a few days, Jones emphasized improving the roster while keeping continuity.

“Let’s be real: We had a tremendous season. The way it ended was disappointing, but the season was not a disappointment,” Jones said. “I’m not going to change what we do. I’m not going to change my approach to team-building, which is to create and construct a team with a ton of depth, skill and chemistry. We just need to be better and after a summer where our guys improve, I think we will be.”

One of the moves for keeping team chemistry is what Jones will decide to do with Ayton and his contract. Before the season, Ayton and the team did not agree on a contract extension which makes him a restricted free agent this summer.

This means that if another team offers him a contract, the Suns have an opportunity to match it or let him walk. Other options could include a potential sign-and-trade with another team or Ayton accepting less than a max extension from Phoenix.

Ayton is one of several decisions the Suns will need to make this postseason Besides free agency, teams can replenish talent or add depth through the NBA Draft, but as it currently stands, the Suns do not have a pick in the 2022 draft.

“You know me, I explore all options,” Jones said of his draft strategy. “If there’s an opportunity for us to get back into the draft, we will. We are going to use all avenues to improve.”

The Suns’ first round pick is held by the Oklahoma City Thunder from the Chris Paul trade in 2020. Their second round pick is in possession of the Indiana Pacers from a deal at this past season’s trade deadline for forward Torrey Craig.

“I go into those deadlines and summer with the same mentality: explore everything that can help us improve,” Jones said. “I’m not revisiting what we did. We made moves that we felt increased our depth and it did.”

Although the season did not end the way the reigning Western Conference champs had hoped, Jones pointed out a much-need area of improvement for the Suns.

“It’s a team game,” he said. “There are opportunities every year and stretches in the season for guys to carry a bigger load. I thought we did that well during the regular season, but not so well in the postseason, so I think our guys will just need to step up and give a little more when it’s needed.”