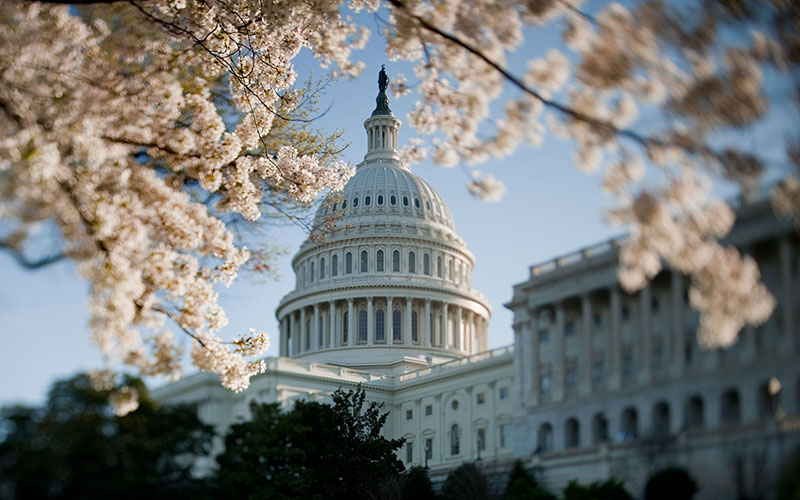 More than 40 candidates are running for Arizona’s nine seats in the U.S. House, as redistricting, retirement and a president with sinking approval ratings have made the races more attractive than usual to challengers, particularly GOP hopefuls, analysts say. (Photo courtesy Architect of the Capitol)

WASHINGTON – Arizona congressional challengers have been emboldened this year by an open seat, an unpopular president and a newly drawn district map – and they have the money to show for it.

Congressional challengers had raised $13.7 million as of March 31 to the incumbents’ $9.4 million, according to their most recent campaign finance reports with the Federal Election Commission.

Part of it is purely a numbers game: There are 27 challengers to the eight incumbents seeking reelection and another eight candidates seeking the 6th District seat being left open by the retirement of Rep. Ann Kirkpatrick, D-Tucson. But even though they are far outnumbered by challengers, one expert said it is still “not normal” for incumbents to be trailing in fundraising at this point in an election cycle.

“This could potentially be a very anti-incumbent year in Arizona,” said J. Miles Coleman, an associate editor of Sabato’s Crystal Ball at the UVA Center for Politics.

Most of the money is flowing into Kirkpatrick’s district, where five Republicans and three Democrats have filed for the chance to replace her in Congress. Challenges to Rep. Tom O’Halleran, D-Sedona, and Rep. David Schweikert, R-Fountain Hills, have seen heavy fundraising, and Rep. Greg Stanton, D-Phoenix, has six Republicans vying for the chance to face him in November.

Stanton and O’Halleran were both victims of the decennial redrawing of congressional district boundaries, which added more Republican voters to both of their districts. That got a baker’s dozen of challengers to jump into a midterm election in which President Joe Biden’s falling approval ratings are expected to make it even harder for Democrats, who would have faced a tough time in the midterms to begin with. 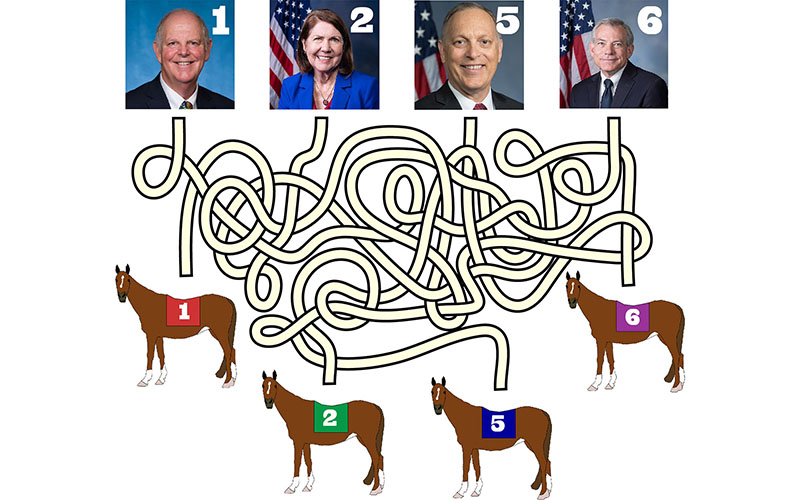 Stanton “kind of got the short end of the stick in redistricting,” said Coleman, whose rating for the newly drawn District 4 went from “like Biden plus 25, down to Biden plus 10.” But most experts still believe the district is likely Democratic, and Stanton has the money to defend his seat, reporting just over $2 million raised to the $1.9 million for his six GOP challengers combined.

O’Halleran faced bigger changes, with Yavapai County added to the district that includes much of eastern Arizona.

“Yavapai County is like a wellspring of Republican votes,” Coleman said. “If you take out Yavapai County, the rest of his district … still voted for Biden, but that is like the red anchor that’s going to help Republicans in the general election.”

But O’Halleran, who portrays himself as a bipartisan, moderate lawmaker, claims he is not worried and is not going to change his politics or his style. He said he is confident that his track record and the work he has done in the district will carry him through.

“I think people judge me on my record. And my record is one of getting things done,” O’Halleran said. “People should know who I am and what I stand for.”

Bill Scheel, a partner at the Arizona political consulting firm Javelina, said that while the race looks bad on paper, he thinks O’Halleran still has a chance.

“I think it’s tougher for Tom O’Halleran,” Scheel said of the redistricting, “but he’s certainly proven his ability to eke out those narrow wins in that district and so I would not bet against him.” 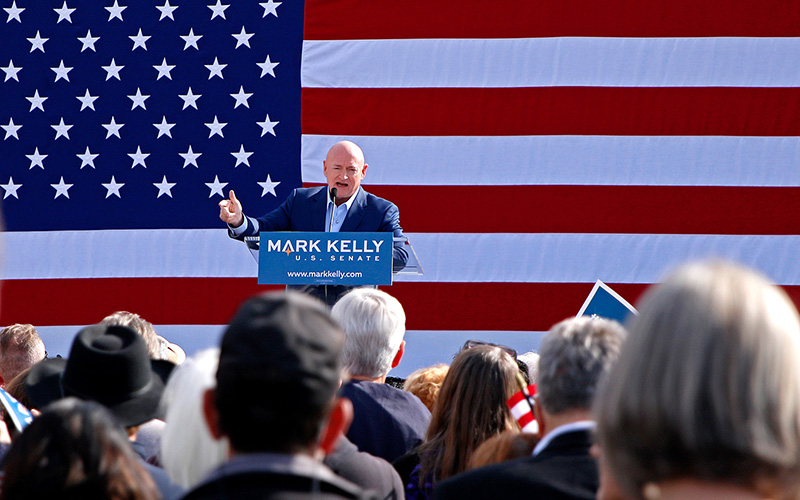 That was echoed by Brian Seitchik, an Arizona political consultant, who said that looking at the District 2 race with “a registration disadvantage, and a cash disadvantage and a terrible environment, I think Tom O’Halleran’s days are done here.” But then he turned around and noted that O’Halleran has been through tough fights before, “so it’s not going to be a done deal that Republicans are going to pick up the seat.”

The biggest problem for O’Halleran, analysts say, will be separating himself from an unpopular Biden.

“I think that’s some of the uphill climb that O’Halleran is going to have, certainly in that district, in which is a very rural district, Biden is not particularly popular,” said Scheel, who expects O’Halleran to focus on Arizona issues instead of national issues.

“Ever heard the phrase, a rising tide lifts all boats? You know, I think Biden’s approval is the opposite … sinking tides lower all boats,” Coleman said.

Still, O’Halleran has managed to raise more than any one of his challengers, with $1.7 million in the bank as of March 31 and no Democratic primary challengers. His Republican challengers, meanwhile, had spent more than $2 million and had $1.2 million combined in cash on hand by that date.

It’s different in District 1, where Schweikert has been heavily outraised by five challengers – including two Republicans who are challenging him in the primary. Most of that money has come from GOP challenger Elijah Norton, whose $3.5 million in campaign funds includes a $2.85 million loan he made to himself. 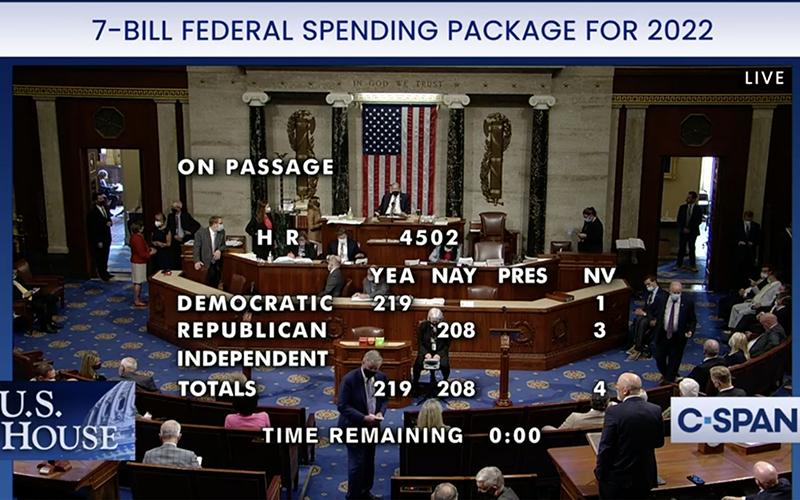 Seitchik, who serves as general consultant to Norton’s campaign, said he believes Schweikert, a six-term incumbent, has reason to worry. The Norton campaign has focused heavily on ethics violations that led to Schweikert being reprimanded and fined $50,000 by the House in 2020 for misuse of office funds, among other issues.

“Money is sort of the first indication of support. And there’s been really a collapse of support for Congressman Schweikert,” he said.

While many experts believe it will be an interesting primary, a spokesperson for the Schweikert campaign said “that’s wishful thinking.”

“David Schweikert, you know, is the same person he was when he was first elected,” said Chris Baker, the spokesperson. “He’s a conservative who represents his constituents quite well. They (voters) know that.”

This is not the first time Schweikert has faced a well-funded challenger focused on his ethics violations. Democrat Hiral Tipirneni spent $6.4 million on a campaign focused on the ethics issue in 2020, but won just 47% of the vote to Schweikert’s 53%.

If he can get out of the primary, Schweikert would be running in a district that still leans Republican.

While he and Schweikert face tough reelection bids, O’Halleran said he’s up for the challenge.

“When I played basketball in high school, or football, I used to put the cleats on or my gym shoes and hit the court and play the best I can,” he said. “That’s exactly what I’ll do. I love competition. And, you know, let’s just get to it.”