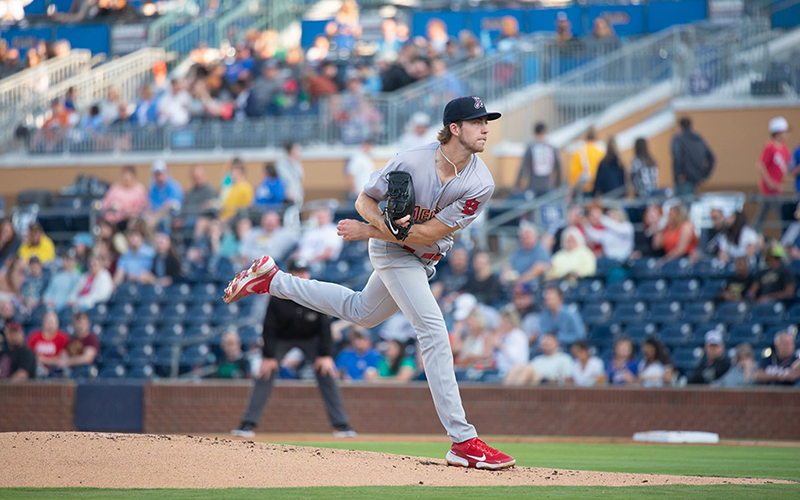 Matthew Liberatore has a scoreless innings streak of 17.0 innings, and in his last two starts has struck out 16 batters over 14.0 innings. (Photo courtesy of Memphis Redbirds)

MEMPHIS, Tenn. – Nolan Gorman was on the ninth green of a mini-golf round when he noticed a missed call from his best friend and childhood teammate.

The Sandra Day O’Connor High School alumnus and No. 2 prospect in the St. Louis Cardinals organization quickly finished his round and returned the call. On the line was Mountain Ridge High School product Matthew Liberatore.

“We are teammates again,” he said. “We get to do all of those things we talked about our whole lives growing up.”

The left-handed pitcher had just been traded to the St. Louis Cardinals organization from the Tampa Bay Rays.

“The stars have all aligned,” MLB.com’s Jonathan Mayo said. “I can’t recall that ever happening. There have been stories of close friends being reunited in the big leagues, but there is not another example that jumps to mind of guys who were that tight when they were in high school being (the top two prospects) in the organization and playing at the same level.” 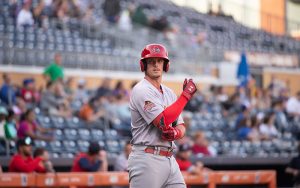 After starting the 2022 season 0 for 9, Nolan Gorman has slugged 11 home runs across a 16-game hitting streak, a career high for the infielder. (Photo courtesy of Memphis Redbirds)

The two began playing together when Gorman was 4 and Liberatore 5. From then on, they have been teammates, with the exception of AIA high school baseball and the first year-and-a-half of their professional careers. This season, they are playing for the Cardinals’ Triple-A affiliate, the Memphis Redbirds.

Gorman’s fondest memories of playing with Liberatore include all the winning they have done together and their ability to travel around the country by way of baseball.

To this day, the two continue to have success individually and collectively. Each player has risen through the minor league ranks with lightning speed.

“He is a guy that is going to go (100 %) for you every day,” Liberatore said. “When you give up a run, you feel like, when his spot comes up in the lineup, he will get that run back for you.”

So far, Gorman has done exactly that.

After starting the 2022 season 0 for 9, Gorman has slugged 11 home runs across a 16-game hitting streak, a career high for the infielder. Gorman is the No. 2 prospect in the St. Louis Cardinals minor league system, according to MLB.com.

Liberatore, the No. 3 prospect in the Cardinals minor league system, dominated in his last three starts and earned Triple-A International League Pitcher of the Week honors for April 19-24. The left-hander has a scoreless innings streak of 17.0 innings and in his last two starts has struck out 16 batters over 14.0 innings.

Selected within three picks of one another in the first round of the 2018 MLB Draft, the two had something beyond the normal physical ability of high school draft picks. They simply knew the game and had a love for the game that acted as a bind to hold their resumes together.

“The two of them, back from high school, just had a fun combination of clearly having fun and really having an understanding of what it takes to excel at the highest level,” Mayo said.

Their chemistry can easily be seen off the field. In the offseason following the MLB Draft in which each were selected in the first round, the debut of a new ping-pong trick was released on Liberatore’s Twitter account.

Gorman, with his right arm extended, spun around. Simultaneously, Liberatore delivered a fastball toward his soon-to-be target. With perfect timing, Gorman snatched the orange ball directly into his palm.

That chemistry leads to pride on the field and the desire to assist the other toward success.

“I’d like to say that, no matter who is on the mound, I am always going 100 %, but it is definitely different when he is out there,” Gorman said. “I want him to have success on the mound. Whatever I can do behind him or at the plate to help him win a ball game is what I am trying to do.”

Liberatore and Gorman next take the field together at 9:05 a.m., Arizona time, Tuesday in Memphis against Jacksonville. The game can be heard on the Memphis Redbirds Radio Network and seen on MiLB.TV.

Liberatore is excited for the journey.

“It is a really cool feeling to get to step out on the mound and not just get to compete with him, but feel like he is going to be a contributor to my success.”