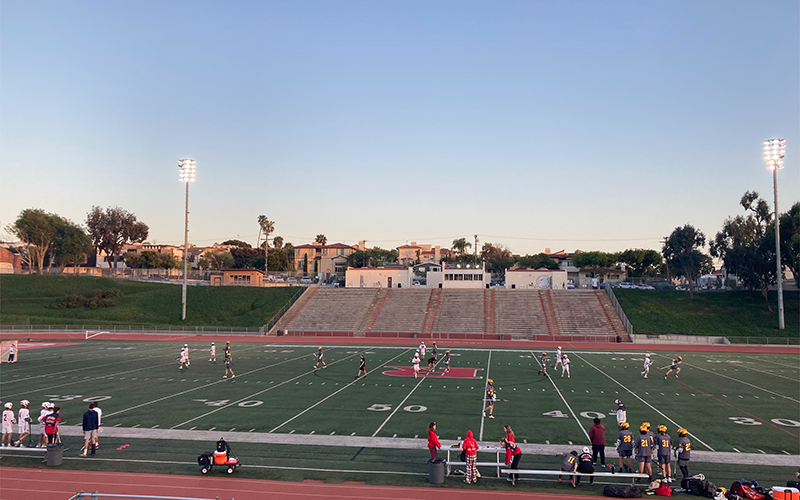 Two assistant coaches were forced to officiate a boys lacrosse game between Redondo Union and Simi Valley high schools on Wednesday, April 6, 2022, after some referees across the Los Angeles area refused game assignments in a pay dispute. (Photo by Joey Vacca/Cronkite News)

LOS ANGELES – Officiating high school sports is a notoriously thankless job. Managing tempers on the field while ignoring taunts in the stands is a job that few people accept, but one that’s crucial to prep sports.

“We still need our schools to treat officials better when they get there, we still need our parents and fans to lighten up on our officials,” said Rob Wigod, commissioner of the southern section of the California Interscholastic Federation, or CIF, which governs high school sports.

Short of sending parents to charm school, one way to improve the job may be better compensation. In February, the CIF proposed a new flat-rate pay structure for high school sports officials in Southern California in hopes of achieving more equal compensation across all sports while retaining and attracting referees and umpires. But some refs blew their whistles on the proposal. Although their pay would be in line with national averages, boys lacrosse referees are concerned about how they stack up against their L.A. peers in other sports.

In early April, the lacrosse referees began refusing game assignments in protest. Some schools were forced to use assistant coaches as referees, and others had games canceled.

Although the CIF and the associations that represent sports officials haven’t reached a deal, they have agreed to finish the 2022 season on a “good faith commitment” that the demands of the boys lacrosse referees will be considered in the fall, with a final decision being made before the start of the spring season next February.

Last February, a committee of athletic directors, principals, district office personnel and some referees, introduced the new proposal to the CIF’s Southern Section Council, which approved it 68-18-1. California is split into regional sections, each with its own commissioner. As the council said in a statement, the proposal “addresses fair compensation for ALL sports officials in all sports.”

Under the proposal, Southern California high school officials in all sports no longer would be paid on a per-game fee. As fees typically are in effect for three years, the proposal instead would pay officials $35 per hour by the third year. Rather than a flat fee per game, pay would be based on the estimated time allotted for each sport, as determined by the CIF’s fee committee.

Under the proposed change, by year three, football officials in the southern section would be paid $140 for four hours of work, basketball referees would receive $88 for 2.5 hours, and baseball umpires would get $116 for three hours of work.

But not all sports fared as well. Football, basketball and baseball officials would get raises of $51, $15, and $21, respectively, but boys lacrosse referees would get only a $2 raise. Boys lacrosse was set at 2.25 hours, a $79 fee.

Joe Lloyd, president of the Greater Los Angeles Lacrosse Officials Association, said this was a misstep in the face of CIF’s well-known referee shortage.

“The problem is, CIF talks a big game when it comes to … desperately needing refs,” he said. “But when it came to making it equitable for our sport, it looked like they fell short.”
When boys lacrosse was offered as a club sport, referees were compensated with a per game fee based on their experience level. Lloyd said college officials earned $100, officials with three or more years received $85, and less-experienced officials were paid $75. However, Lloyd said, once the sport became CIF sanctioned in 2006, referees had to take a nearly 25% pay cut.

Lloyd said officials don’t think the new rate accurately reflects the time worked per game, and they argue for a mark of 2.75 hours. Referees began dropping their game assignments and stopped accepting on April 6, briefly jeopardizing the remainder of the 2022 season.

Lloyd said CIF reached out to officials associations to meet the next day and they agreed to collect data on game times for the remainder of the season and revisit the issue in the fall. Lacrosse refs began accepting game assignments again April 8.

As the southern section still battles the severe referee shortage across all sports that predates the pandemic, Wigod is confident the pay proposal is a step in the right direction.

“I think (the committee) did a really good job of coming up with a formula, trying to make it as equitable as they could,” Wigod said. “Hopefully providing a stability in the financial piece of the official shortage.”

Now, officials are taking the rest of the spring to document the time spent working games, including pre- and postgame responsibilities.

“Once we see the data, I think honestly that it’s going to be a very simple steps forward, with the data proving what they’ve said prior to this point,” Wigod said. “As I’ve said, if the data doesn’t prove, that might be a different conversation. … We have to be able to work together, trust each other.”

On the other side of the negotiating table, Lloyd knows many at this time have been putting their trust in him.

“I’ve put my reputation with my officials on the line with this… we’re doing everything we can because we don’t want a stoppage again,” Lloyd said. “Our biggest hurdle right now is just in August, with CIF understanding that they just got it wrong. And they just need to fix it.”

Boys lacrosse referees will present their compiled time data to the committee in the fall, to be used in deciding whether an amendment to the original proposal is necessary. A final decision will be made Feb. 1, and the 2023 boys lacrosse season is scheduled to begin Feb. 11. 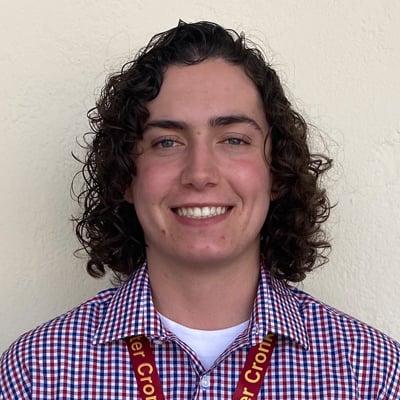