Jamie Boggs, one of five Asian-American athletic directors in the country, has helped Grand Canyon University make a smooth transition to Division I athletics. (Photo by Mary Grace Grabill/Cronkite News)

PHOENIX – Jamie Boggs grew up just 3 miles away from the campus of Grand Canyon University, so she appreciates more than most how much the west-side campus has evolved.

Now, as vice president of athletics at GCU, Boggs is back in the community she called home, serving as a trailblazer in NCAA athletics.

“I remember coming back home and driving by the campus a lot of times. And it would just get bigger and bigger, and it’s like, ‘What’s going on here at GCU?’” Boggs said.

What was going on, Boggs learned, is Grand Canyon’s rapid growth that is guided by what she describes as “the four C’s”: continuous improvement, collaboration, Christian leadership and community.

That growth includes an athletic department that transitioned into NCAA Division I and immediately made an impact on the Western Athletic Conference, largely under the direction of Boggs.

She was elevated to her current position on an interim basis in 2019, then the interim tag was removed in 2021.

The GCU athletic program has experienced tremendous growth and success over the last seven years. 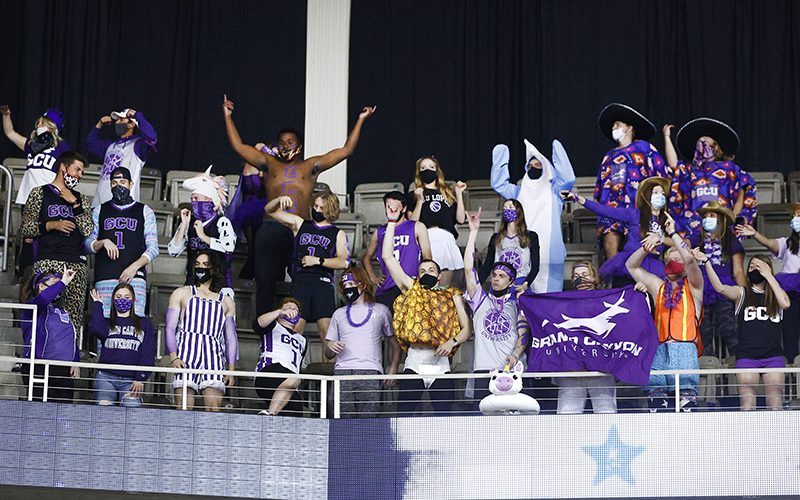 GCU reached the national stage in March 2021, when the men’s basketball team made their first appearance in the NCAA Tournament after winning the WAC regular-season title and capturing the league’s automatic NCAA Tournament bid with a victory in the conference tournament. GCU baseball also made its first appearance in the NCAA baseball tournament last summer.

“I’m extremely thankful for Jamie,” said Bryce Drew, GCU men’s basketball coach. “She’s not only an excellent athletic director, but she’s a terrific woman, a woman of God, who represents our school in the right way.”

While championships are valuable and no small feat for the school, Boggs’ emphasis on student success and student life on campus sticks out to many around the university.

“Jamie is unbelievable in terms of what she does behind the scenes to give the athletes and this university the best experience possible,” said Matt Werle, men’s volleyball coach. “She wants to make sure that these athletes are taken care of and the sports are set up for success.”

While GCU’s athletic department has enjoyed significant growth over the past decade, it is a burgeoning university as well. The school welcomed its largest incoming freshman class ever for the 2021-22 academic year.

Boggs emphasized the school’s commitment to academics and providing students with the best experience possible. She wants the same for the school’s athletes.

“Our student satisfaction across campus, across the board, is very high,” Boggs said. “We want to mimic that and continue to improve our student-athlete experience.”

While Boggs is having tremendous success today, her path to a leadership role in a university athletic department was anything but conventional.

While completing law school, Boggs decided to alter her path and pursue a career in sports, something that always interested her.

“It didn’t take me too long to figure out that this probably wasn’t a good fit for me,” Boggs said of pursuing a long-term career in law.

Sports, on the other hand, was a natural fit.

“Most of us grew up diehard Phoenix Suns fans,” she said. “The thing I really love is sports.”

She worked with a sports agency out of law school, learning more about the business side of sports and how to handle herself as a professional in the world of athletics. 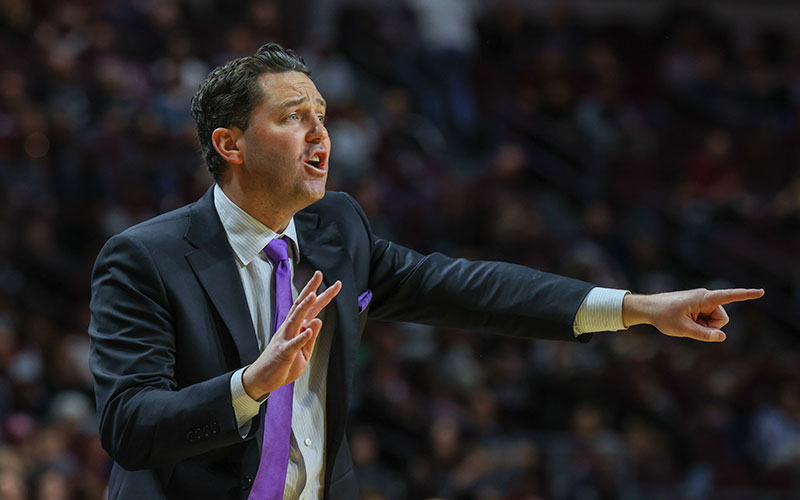 Grand Canyon men’s basketball coach Bryce Drew said athletic director Jamie Boggs is “not only an excellent athletic director, but she’s a terrific woman, a woman of God, who represents our school in the right way.” (Photo by Mary Grace Grabill/Cronkite News)

“You have to really be willing to put yourself out there,” Boggs said. “You meet people that you don’t know. You have to be very assertive with that. I really took a lot of that coming onto a campus and working at a university.”

Nicole Alderson, GCU’s associate athletic director of student-athlete development, said that Boggs is very personable and is always willing to trade ideas with others – living the C for collaboration.

“(She says,) ‘OK, these are things that we want to do, how can we do it? How can we get better?,’” Alderson said. “The thing I love about her work is that she’s not complacent.

In 2015, Boggs left Georgia State University and returned to Phoenix to join GCU as a deputy athletic director to help in the transition from NCAA Division II to Division I. In 2019, she was named interim vice president of athletics. When the interim title was lifted in 2021, Boggs officially became the first woman in school history to hold the director of athletics position.

While moving up in her career, Boggs said she never put much thought into the fact that she was a female and a minority. Once she reached a leadership role, other women and minorities started reaching out to her and she realized the impact her rise was having on others.

“Even though I didn’t really think about it, going through my career, I realize now,” she said. “And I am very intentional about supporting women and minorities who are also looking to be in the athletics director role.”

“She’s very visionary, and she isn’t afraid to kind of take a risk and bring everybody along with her,” Alderson said. “She has a vision and she can execute that vision.”

While the specifics of each transition were different, Boggs was able to draw on the experiences she had in Atlanta and apply them to what GCU was doing in Phoenix.

Something that continues to stick out about GCU to Boggs is the consistent support and collaborative effort that exists at the school with a focus on elevating the community, university and athletic programs together.

“To see all the investment into creating jobs for this area, for rebuilding this neighborhood, for investing in K-12 education and all those things, made me really excited to be just a small part of it,” she said. “And maybe athletics isn’t directly part of that. But to be part of it, to me, was such a blessing.”

Looking ahead, Boggs hopes to continue helping to grow the school and community. And as for athletics, she not only hopes to help bring more WAC titles home to Phoenix, but national championships as well.

“We’re all on the same page,” she said. “Our job is to add the fifth C – and that’s championships.”