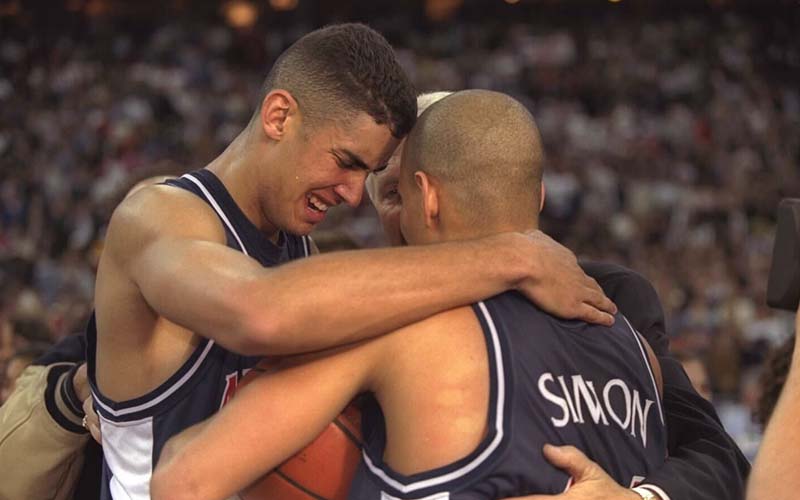 Center AJ Bramlett, left, shared a hug with Miles Simon, right, and coach Lute Olson after the NCAA men’s title game against the Kentucky Wildcats at the RCA Dome in Indianapolis, Indiana. (Photo by Brian Bahr/Allsports via Getty Images)

PHOENIX – The Arizona Wildcats went into the 2022 NCAA Tournament as the Pac-12 conference champions and one of four No. 1 seeds, with a 31-3 record and high expectations to compete for a national title.

It all came crashing to a halt in the Sweet 16 as the Wildcats fell to the Houston Cougars, ending their season three wins shy of a national championship appearance.

For the 1997 Arizona men’s basketball team, the Wildcats’ disappointment this year magnified the legacy it forged by winning the first men’s basketball national championship in school history 25 years ago today.

“The older I get, I really have grown to appreciate it a lot more,” said Jim Rosborough, an Arizona assistant coach on the title team.

The 1997 Wildcats, with their improbable run to glory, serve as an enduring example of the beauty of March Madness, and why it is widely regarded as one of the greatest spectacles in sports.

That March, the No. 4 seeded Wildcats were not expected to advance deep into the tournament. It wasn’t just outsiders who doubted the Wildcats. Even some people close to the team questioned whether they had the consistency needed to go far.

“I don’t think anybody in their wildest imagination would have had any idea what was coming,” Rosborough said.

The Wildcats were coming off of an appearance in the Sweet 16 the year before, but expectations were tempered heading into the 1996-97 season.

Coached by Lute Olson, then in his 14th season at the program’s helm, the Wildcats were a younger team focused on gaining experience to prepare for a title run in the tournament the following season.

While expectations may not have been championship-or-bust, that didn’t mean the team was complacent. The Wildcats’ goal was to advance to the tournament and then see how brightly they could shine on the collegiate game’s biggest stage. 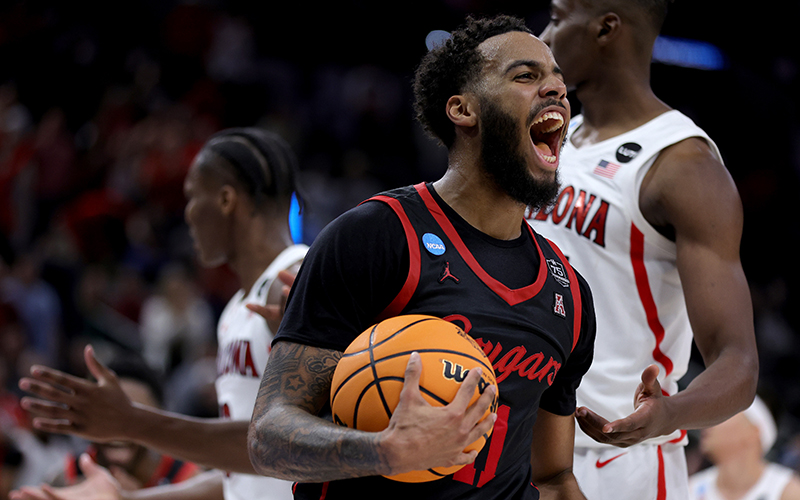 Right out of the gate in 1996, Arizona faced its first bit of adversity when junior guard Miles Simon was ruled academically ineligible for the first part of the season. Simon returned in January as the team was beginning Pac-10 play.

Instead of a strong regular-season finish, Arizona lost to Stanford and California in its final two games.

While the back-to-back defeats didn’t appear terrible on the surface, they led to a locker room dispute between an assistant coach and scout team players that escalated to the point where the involved parties had to be separated.

On Selection Sunday, the Wildcats earned the No. 4 seed in the Southeast region, setting up a first-round match against No. 13 seed South Alabama. The Jaguars, coached by Bill Musselman and known for their suffocating defense, were a tough matchup for Arizona’s high-scoring offense.

The game matched strength versus strength, as the Wildcats finished the season third in the country in points per game and the Jaguars finished fifth in points allowed per game.

When the team’s first-round opponent was revealed, Rosborough recalled, “That was not exactly a real encouraging moment.”

For much of the first-round matchup, South Alabama’s game plan worked. It led by 10 with just seven-and-a-half minutes remaining.

Arizona switched to a more aggressive defense, forcing five turnovers over the final 7:31 and holding the Jaguars to four points in that span. The offense closed the gap and the Wildcats escaped with a hard-fought 65-57 victory.

The Wildcats’ gritty comeback gave them back the momentum that they had lost on the final weekend of the regular season.

“It kind of set them up to show that if you can come back from that, anything is possible,” said Brett Hansen, who was the team’s media relations director.

Putting the locker-room scuffle behind them, the Wildcats rallied around one another and built on the unity that they had developed during the tough times early in the season.

“When we got down, we really leaned on each other,” said Terry, who added, “We really banded together, and that’s when the magic started to happen.”

In the second round, the Wildcats edged College of Charleston 73-69 to advance for the second straight year to the Sweet 16, where they faced their toughest test yet: a 34-1 Kansas team. The top-seeded Jayhawks, whose only loss was in double overtime on the road at Missouri in February, featured one of the best offenses in the country.

Roy Williams had already coached the Jayhawks to two Final Fours, and he had his eyes set on a third. With five players who averaged double-digits in scoring, including Paul Pierce and Raef LaFrentz, Kansas looked unbeatable on paper, which made Arizona’s 85-82 victory extra memorable. 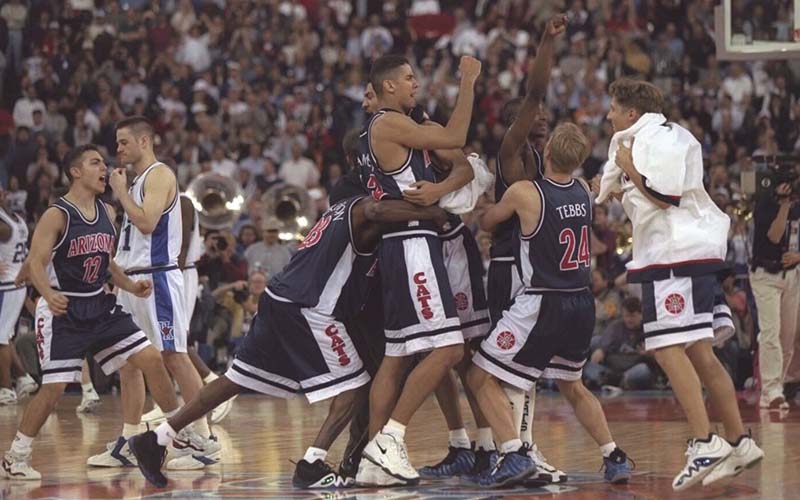 The Wildcats were not title favorites at the beginning of the season, which made their championship celebration that much sweeter. (Photo by Brian Bahr /Allsport via Getty Images)

“I still look back at that Kansas game, and I still think that’s the greatest game an Arizona basketball team has ever played,” Hansen said. “To beat that team, and to do it like they did … a lot of people thought after that, we’re winning the national championship.”

In the Elite Eight, the 10th-seeded Providence Friars took the Wildcats to overtime, but Arizona pulled out a 96-92 win to advance to the program’s third men’s Final Four.

The NCAA Tournament thrives on close matchups and unexpected outcomes. The Wildcats embodied the madness that makes the March tournament so compelling on their way to the Final Four.

“For that run, we were the Cardiac Cats,” Pastner said. “I mean, it was by the skin of our teeth, literally every possession, and it was miraculous.

The road only got tougher in the Final Four. North Carolina, Kentucky and Minnesota, the other three Final Four teams, were all the top seeds.

In the semifinals, Arizona faced North Carolina. It was the second meeting of the teams. The Wildcats, playing without Simon, had handed the Tar Heels an 83-72 defeat in their regular-season opener in late November at the Hall of Fame Tipoff Classic in Springfield, Massachusetts.

North Carolina was coached by Dean Smith and had a starting lineup that included future NBA All-Stars in Vince Carter and Antawn Jamison.

Arizona topped the Tar Heels 66-58 in what ended up being the final game of Smith’s legendary 36-year tenure at North Carolina. He would announce his retirement six months later.

“His last game, we hated to do it,” Rosborough said, laughing. “But you wanted to move on.”

The final hurdle was a Wildcats vs. Wildcats matchup with 35-4 Kentucky. UK had the 12th- highest offensive rating in the country and as No. 1 on defense.

Many athletes are restless on the eve of big games, and it was no different for Mike Bibby and Jason Terry in 1997. The night before the national championship, they were already in their game jerseys, ready to go at a moment’s notice, even though the opening tip was still a full day away.

Terry said they had to convince the equipment manager, Walter Teike, to break with tradition and give them their jerseys, which usually were not handed out until the day of the game.

Terry kept the tradition going throughout his NBA career, sort of, sleeping in the opponent’s jersey shorts the night before a game.

The final was a back-and-forth affair. For the second time in the tournament, Arizona was extended to overtime. In OT, Arizona stifled the Kentucky offense to secure an 84-79 victory and the title.

It didn’t sink in until well after the buzzer that there were no more games left and Arizona was the last team standing.

“On the floor at the RCA Dome, when they started playing Queen’s ‘We are the Champions’ leading into ‘One Shining Moment,” Hansen said. “That’s when it kind of hits you: This really, really happened. And it was a surreal feeling.”

Twenty-five years later, the 1997 Wildcats remain the only team to beat three No. 1 seeds in a single NCAA Tournament. What makes their feat all the more impressive is that the three top seeds they beat in 1997 – Kansas, North Carolina and Kentucky – are the three winningest programs in NCAA history.

“Nobody could ever say that we had an easy path to the championship,” said A.J. Bramlett, a sophomore center on the 1996-97 team. “When no one gave us a chance to win any of those games, that makes it even sweeter.” 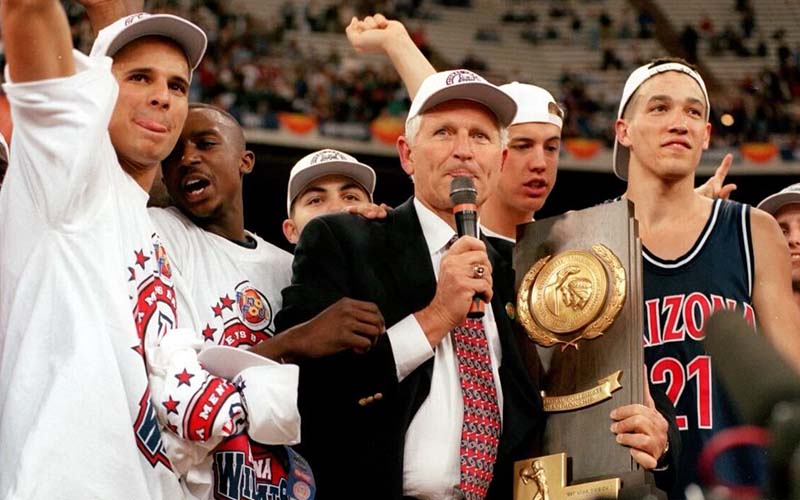 Olson has one of the most accomplished coaching careers in college basketball history and in addition to the 1997 title, led the Wildcats to four Final Fours. (Photo courtesy of NCAA Photos via Getty Images)

Five players from the 1997 team would be drafted in the NBA. Three would be top-14 picks.

In 1998, the Wildcats returned over 97 percent of the scoring from the national championship run. With a year and tournament experience under their belt, players felt they were even better.

But instead of repeating, they bowed out in the Elite Eight to Utah. Three years later, Arizona reached the national championship game but lost to Duke 82-72. The Wildcats haven’t advanced further than the Elite Eight since.

“Coach Olson, there’s no question had better teams than he had in 97,” Pastner said. “And that’s what makes that six game, three week bracket so special.”

The national championship catapulted Olson, who coached 25 years at Arizona, into the top echelon of college coaches, cementing his status as the greatest coach in the program’s history. The players on that team regard the title as the final piece, a “culmination” of everything Olson stood for and had worked for over his career.

For the people associated with the 1997 championship team, time has not diminished the accomplishment. If anything, their appreciation for what they achieved has grown over the years.

Terry won an NBA title in 2011 with the Dallas Mavericks, but the NCAA title he won with Arizona still sticks out as one of the crowning accomplishments of his career.