The U.S. Supreme Court said it will consider whether the Arizona Supreme Court erred when it refused to grant a new sentencing hearing to an inmate on death row for the 2003 killing of a Tucson police officer. (File photo by Nathan O’Neal/Cronkite News)

WASHINGTON – The Supreme Court Monday agreed to hear an Arizona death-row inmate’s claim that he was wrongly denied the chance to tell jurors he would be ineligible for parole if they sentenced him to life instead of death.

John Montenegro Cruz killed a Tucson police officer in 2003 and has been on death row since 2005 – more than a decade after the Supreme Court said defendants have a due process right to tell jurors they would spend the rest of their lives behind bars if sentenced to life.

Arizona courts did not allow that right until 2016, when the U.S. Supreme Court directly ordered the state to do so. Cruz asked for a resentencing, citing the 2016 ruling, and his attorneys said it “should have been an easy case” for the Arizona Supreme Court to order the new hearing.

Instead, the state court in June said Cruz should not get another sentencing hearing because the high court’s 2016 ruling was not a “significant change in the law” that would merit a new hearing.

“The Arizona Supreme Court’s refusal to follow the same approach here creates a square conflict on an important issue of federal law in a case with life-or-death stakes,” Cruz said in his petition to the U.S. Supreme Court.

That petition said the decision in Cruz’s case could affect more than two dozen other defendants in Arizona who have sought review under the 1994 ruling that established the due process right – Simmons v. South Carolina – or the 2016 ruling, Lynch v. Arizona, that enforced it in the state. 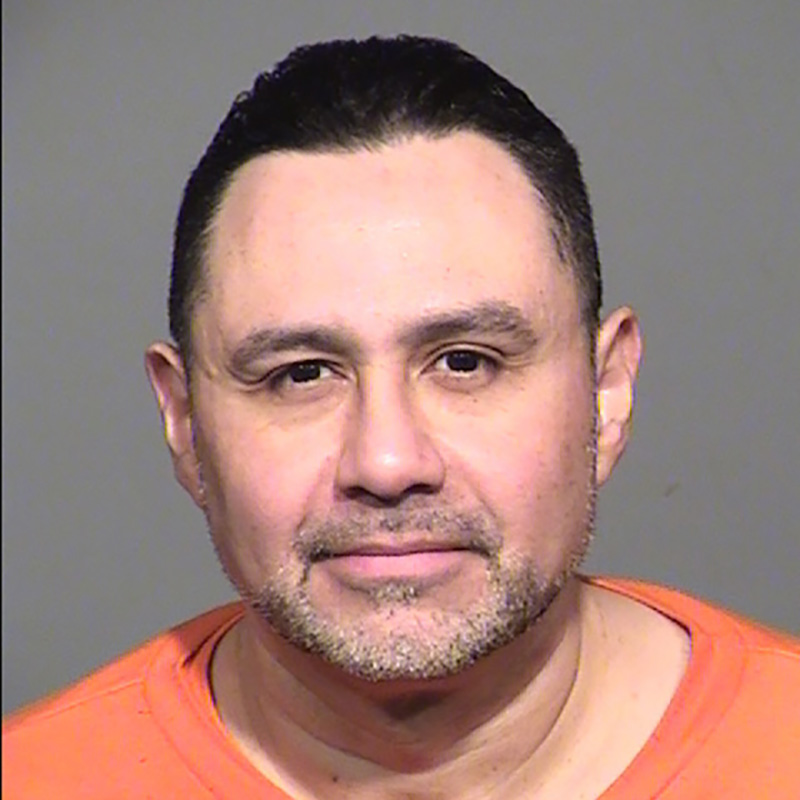 John Montenegro Cruz was sentenced to death for the 2003 killing of a Tucson police officer, but he says he was wrongly denied the chance to tell jurors he would have been ineligible for parole had they sentenced him to life. (Photo courtesy Arizona Department of Corrections, Rehabilitation and Reentry)

Calls seeking comment from Attorney General Mark Brnovich’s office were not immediately returned Monday. But an attorney for Cruz welcomed the high court’s decision to hear the case.

“We are gratified that the U.S. Supreme Court has decided to hear the case, and look forward to the Court’s hearing later this year,” Neal Katyal said in an emailed statement.

The case began in 2003, when Cruz was being questioned by Tucson Police Officer Patrick Hardesty as part of hit-and-run investigation. Cruz started to run, according to court documents, and Hardesty gave chase. At some point Cruz opened fire and hit Hardesty five times, with four of the shots fired from less than a foot away, killing the officer on the spot.

Cruz was charged with one count of first-degree murder, convicted and sentenced to death in 2005. Among the factors contributing to the death sentence was the fact that the victim was a police officer.

Under Arizona law, defendants in capital cases are not eligible for parole if sentenced to life, and Cruz’s trial attorney tried to call a witness from the state’s Board of Clemency to testify to that fact. But the request was denied.

The jury foreperson said after the sentencing that jurors wanted to find a reason to be lenient, but they did not think they had “an option to vote for life in prison without possibility of parole,” so they voted for the death sentence, according to Cruz’s petition.

When Cruz filed for post-conviction relief, citing the 2016 Lynch ruling, the Arizona Supreme Court said that Lynch was not a change in the law but merely a “significant change in the application of the law,” which did not merit a new hearing.

In its response, the state said that Cruz also failed to ask the trial judge to inform jurors that state law “did not allow parole for defendants, like Cruz, who committed felonies after 1993,” ignoring his claim that he was denied the chance to call a witness who would have said that.

Robert Dunham, the executive director of the Death Penalty Information Center, noted that the Supreme Court has narrowed the scope of the question in the case to whether or not the Arizona Supreme Court’s grounds for ruling against Cruz were adequate.

“What that means is if Arizona has its own state law grounds for rejecting Cruz’s claim, and that state law has been adequately applied and this is not a new procedural rule … then Cruz doesn’t get a review of this claim,” Dunham said.

This is not the only Arizona death-row case the justices have considered. The U.S. Supreme Court in December heard the appeals of two inmates who argued they had ineffective assistance of counsel and needed new hearings.

No ruling has been handed down in those cases. But Dunham said it isn’t a coincidence that Arizona is again before the high court.

Dunham said it’s unclear whether Cruz’s death sentence will be overturned if the Supreme Court rules in his favor, or if it will be returned to the lower courts for resentencing. Arguments in the case have not yet been scheduled, but it will not likely be heard until after the next court term begins in October.

“Regardless of what the outcome of this case is, it raises significant questions about whether Arizona can be trusted to provide fair trial and fair appeals in death penalty cases,” Dunham said.