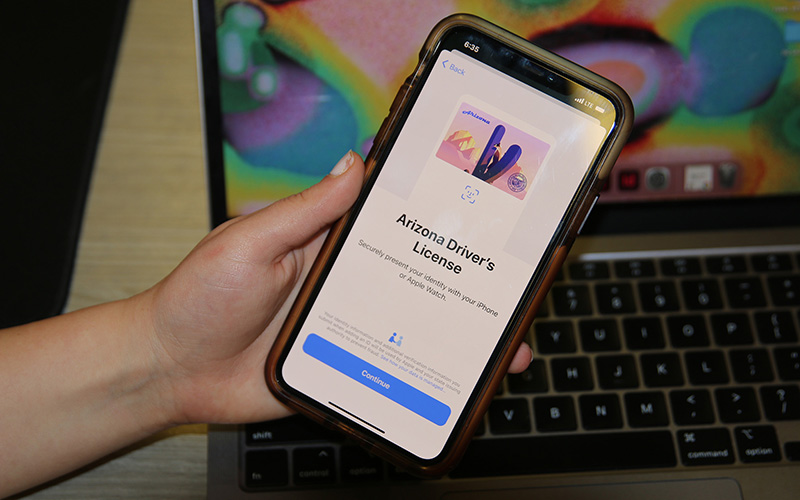 Arizona became the first state in the nation to let drivers add their license to their Apple Wallet. Uses for the virtual license are severely limited, but officials have high hopes for the program. (Photo by Emily Sacia/Cronkite News)

WASHINGTON – Here’s what Arizona residents can do when they add their driver’s license to Apple Wallet: Go through TSA PreCheck at Phoenix Sky Harbor International Airport by just scanning their phone.

Here’s what they can’t do: Pretty much everything else.

Drivers who take advantage of the new virtual license will still have to have their current physical license when they buy a drink, get pulled over or any number of other uses, said an Arizona Department of Transportation spokesperson.

“They need to keep their ID on them because this (virtual license) is only utilized at the TSA checkpoints in the airport,” said Bill Lamoreaux, the ADOT official. “You’d still need your driver’s license or state ID, the physical copy, to show any business that you’d need your ID shown or obviously to deal with law enforcement.”

Despite its currently limited uses, however, state and federal officials were excited this week to roll out the first-in-the-nation program that lets drivers put their license on their phones, which they say should make flight check-in less painful.

And they expect acceptance and utility to grow, as Apple is currently working with 10 other states and Puerto Rico to adopt the technology.

“Phoenix Sky Harbor International Airport is excited to be the first airport in the country to offer travelers the ability to show their ID on their phone at the security checkpoint by using the Apple Wallet,” said Heather Shelbrack, an airport spokesperson.

In order to start using their license in Apple Wallet, drivers must first scan and upload images of both sides of their current plastic license, along with a picture of themselves. That information is sent to the state, which has to verify it and approve the request before the virtual license can be used to get through the Transportation Security Administration’s PreCheck – but only at Sky Harbor.

All Apple iPhone users in the U.S. are able to see the option to add a driver’s license in their Apple Wallet, but only Arizona residents with a valid state ID can actually use the feature.

While tech enthusiasts across the country were eager see the implementation of Apple’s “virtual” ID card in Apple Wallet after the project was announced in September, some were left deflated over the actual rollout and its current limited uses.

“I was very excited when Apple launched it,” said Stephen Robles, a reporter for AppleInsider. “But it seems less and less illustrious as we actually see it physically working in one state.”

But Apple says Arizona will not be the only state with the program for long: Plans to expand to other states and Puerto Rico have been in the works for months.

“Apple has all the software and infrastructure ready,” Robles said. “It’s just on individual states whether or not to offer and adopt the digital ID.”

The virtual license will not take the place of the federal REAL ID Act, which requires all licenses to meet stricter federal standards for identification by May 3, 2023. After that date, only REAL ID-compliant licenses – marked with a gold star – will be accepted at TSA security checkpoints. But if a driver’s physical card is compliant, that will be reflected in the virtual version of their license and they should be “good to go,” according to Lamoreaux.

Despite the halting first steps for the program, state officials are still touting the technology and hoping it will expand out “rather quickly” and make checking in for a flight less painless.

“You can now show your ID on the same product that you’re probably going to show your boarding pass on,” Lamoreaux said. “So it’s an opportunity for folks to take advantage of technology, if they want to.

“It’s a new technology and things will expand as it goes along just like any other technology,” he said.