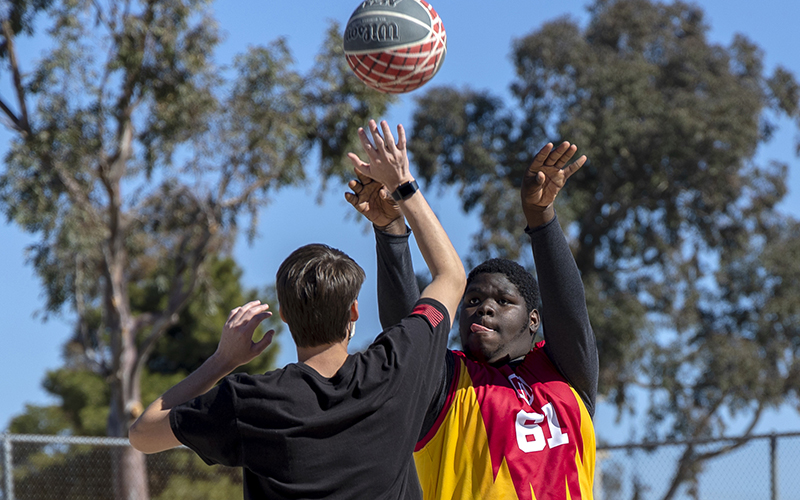 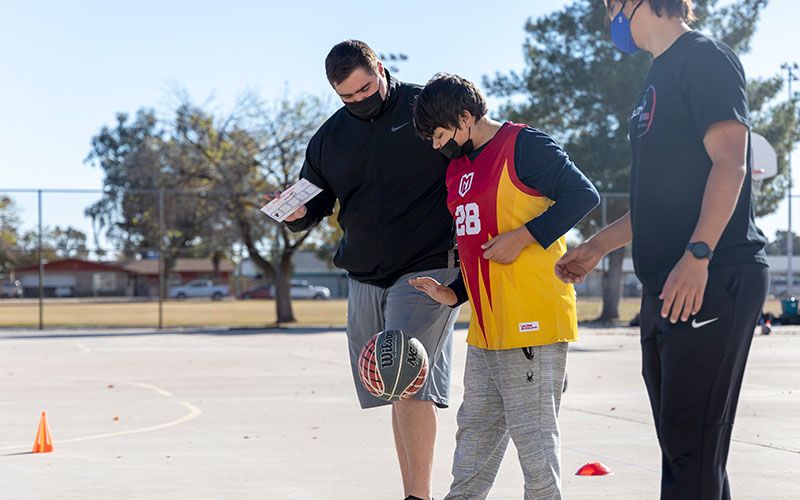 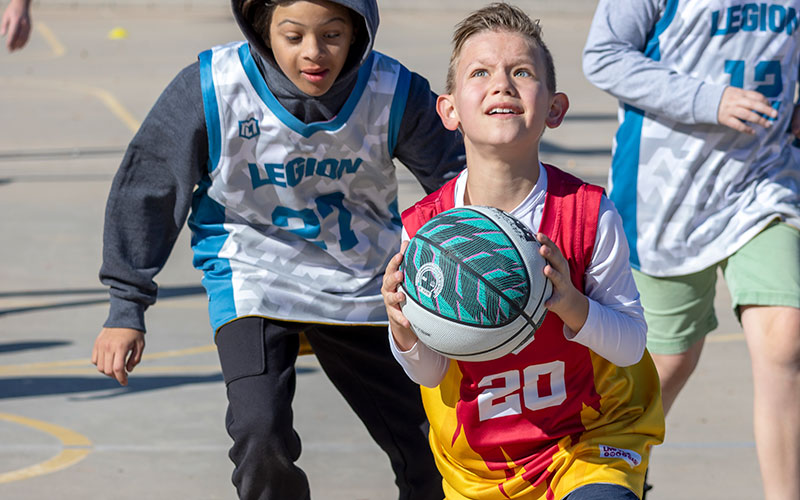 Jack Tait locks eyes on the hoop as Ashaun Lindsey and others chase him down on defense during a Mikey’s League basketball game. (Photo by Mary Grace Grabill/Cronkite News) 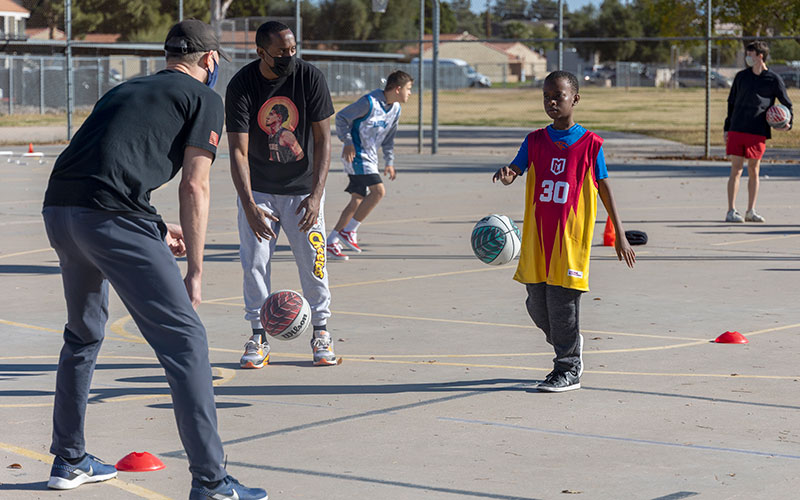 Bailey Mwangi gets one-on-one instruction with Peter Eggers, left, and Aron Harden. They volunteer with the Mikey’s League basketball teams on Saturdays in January and February. (Photo by Mary Grace Grabill/Cronkite News) 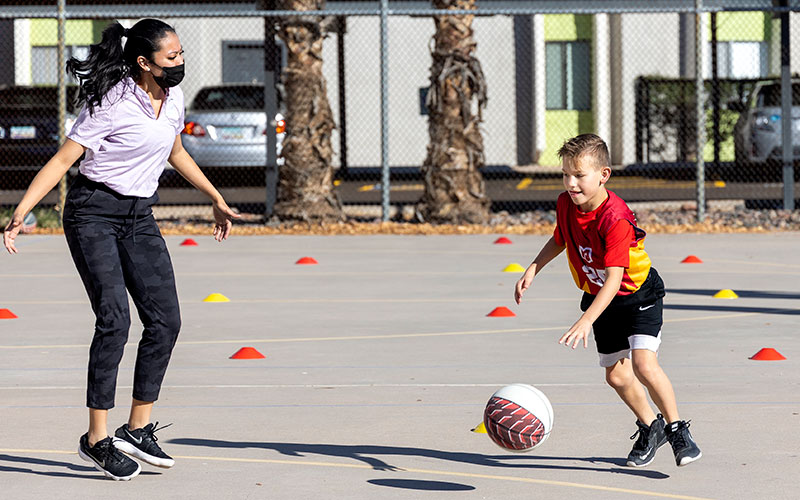 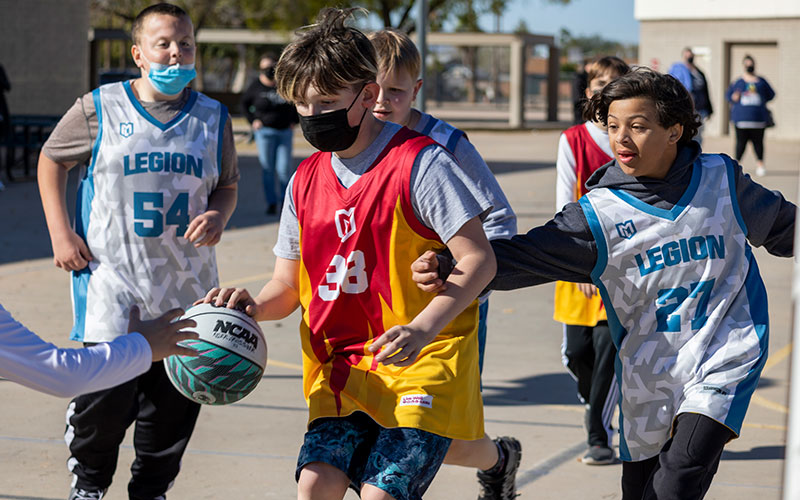 Jameson Riter fends off defenders Landen Dodd, left, and Ashaun Lindsey as he drives to the basket during a Mikey’s League game. (Photo by Mary Grace Grabill/Cronkite News) 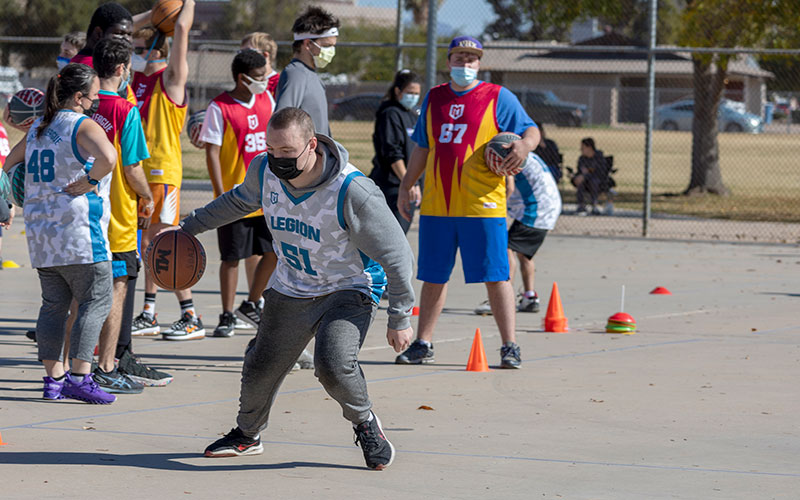 Jackson Settles and other Mikey’s League members line up for dribbling drills. During the 90-minute practices, volunteers coach the players in a variety of skills.
(Photo by Mary Grace Grabill/Cronkite News)

TEMPE – While Karl Bender was deployed in Iraq, his brother Michael was fighting a battle of his own. In 2008, “Mikey” Bender lost his fight with cerebral palsy and a heart defect.

When he was born, doctors had told the Bender family Mikey wouldn’t live past his third birthday. He was 21 when he died.

While Karl was home for the funeral, his unit in Iraq was hit by an IED. In a way, Mikey’s death saved Karl’s life.

“I would not be here if it wasn’t for him,” Bender said.

To honor Mikey’s memory, Bender founded Mikey’s League with Scott Freeman in 2019, creating an outlet of sports for children and adults who have intellectual disabilities and physical disabilities. 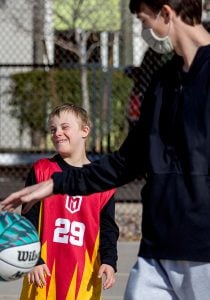 Mikey’s League offers flag football, basketball and hockey in the East Valley, but Bender hopes to expand the league across the state.

“That’s been our emphasis from the beginning, is making sure that these kids feel like they’re getting the same thing as everyone else,” Freeman said. “We want them to have the same experience that they watch their brothers and sisters have. There’s really no reason that they can’t have that experience.”

Freeman said the basketball program did not meet the organization’s “internal expectations of following our mission of giving these kids exceptional services,” so in January, Mikey’s League and KinectAbility Athletics joined to strengthen each program and help athletes grow.

“Daisy is an incredible partner in helping us keep Mikey’s League going,” Bender said. “And that’s what we strive to be is we want to bring quality, and she is quality to our sport or to our league.”

Each practice includes 45 minutes of skills development and 45 minutes of game play for participants. Freeman said the program helps young athletes make connections with everyone involved.

“Through sports, we become connected with coaches that are positive role models,” he said. “We’re connected with peers who hold us accountable for our actions and … to expectations.”