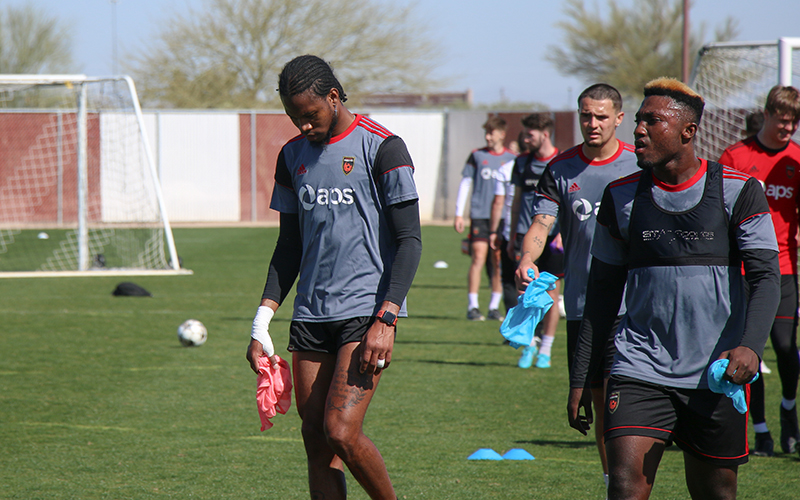 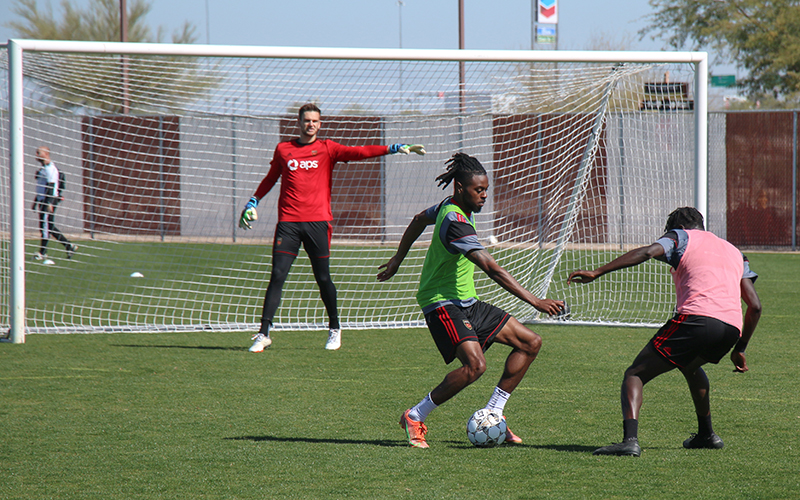 Newcomers Marcus Epps and Baboucarr Njie battle for the ball in training ahead of their preseason matchup against Louisville City FC. (Photo by Harrison Campbell/Cronkite News) 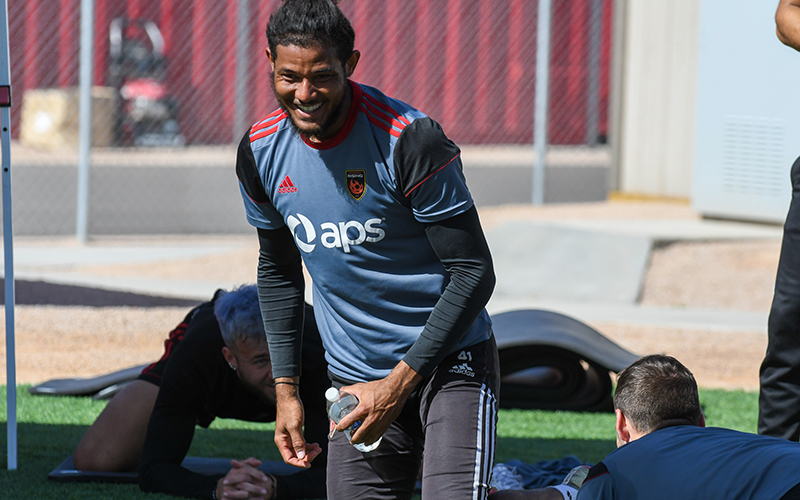 Center back James Musa is all smiles as he prepares for the 2022 season. Injuries at that position make his role particularly significant. (Photo by Dominic Rivera/Cronkite News)

TEMPE – The Phoenix Rising are using the USL preseason to audition scorers to replace forward Solomon Asante, a three-time captain who contributed 54 goals and 43 assists in 114 games with the club.

After two preseason games, the Rising are encouraged about a 2022 campaign that starts in just two weeks.

Asante, a two-time USL Championship MVP, was released in what club officials described as a business decision. The first few games of the preseason have seen newcomers Claudio Repetto and Greg Hurst each build strong cases to be the one that replaces Asante’s goalscoring impact.

Repetto, 25, made an immediate impression when, six hours after his transfer from the Charleston Battery had been announced, he started the Rising’s second preseason game, against two-time MLS champion Sporting KC. Repetto, a native of Italy, flicked a ball onto the feet of right-back Darnell King, who took it down the wing and whipped a ball into Santi Moar who scored Phoenix Rising’s first goal in their eventual 2-1 victory.

“When Claudio flicked the ball through I saw the space and got to the ball as quick as possible,” King said. “I heard Santi and took a quick glance. I knew he was ahead of the defense and behind me, so I just crossed the ball in and he finished it off, like I hope it will be for the rest of the season.”

Hurst, 24, arrived from Union Omaha, where he played a key role in its championship run last season in USL League One. In a press release, Rising coach Rick Schantz praised the soccer IQ of Hurst, a two-time League One All-League First Team selection.

“He has a tremendous technical ability and very good off-the-ball movement,” Schantz said.

“But I think with Claudio we have the ability to play a little more direct,” Schantz said. “He’s good in the air, he can flick balls on. Whereas Greg, his off-the-ball movement, his first touch connecting with the midfield, is very, very good.”

Schantz added, “It’s so exciting to know that we have two very good forwards that are going to be able to change the way the team plays.”

The Rising went 1-1 in their first two preseason games, against first-division MLS squads Houston Dynamo and Sporting KC, the first of which was behind closed doors, while the second was open to media.

Their third game was their first in front of fans since last season and was played at home against USL competition Louisville City FC. The drums of Los Bandidos, a Phoenix Rising supporters group, were pounding all game long and the cheers of the fans were a welcome sound for the players and staff.

After halftime of the eventual 2-2 draw, Hurst was the first to sub in, coming on for Repetto as Schantz continued to tinker with his lineup, more specifically the front-line.

Another new attacking threat for the Rising is Marcus Epps, who was signed in the offseason from San Antonio FC, where he led all field players in minutes played in a season that saw his team reach the Conference Finals. 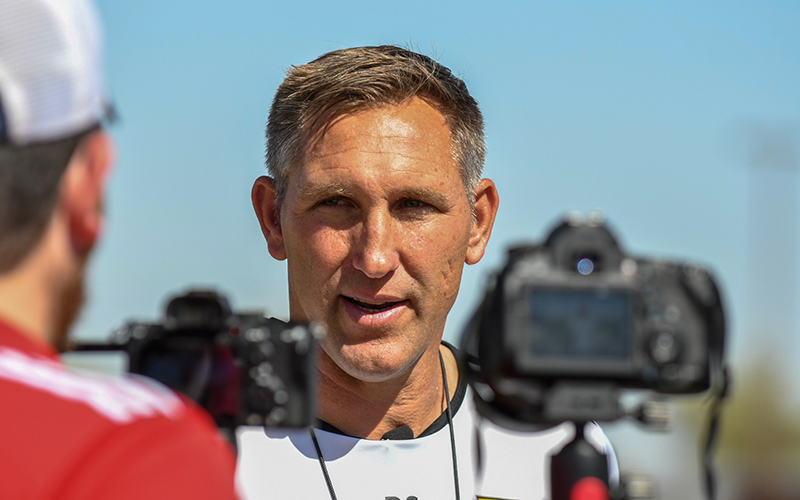 Phoenix Rising manager Rick Schantz knows replacing Solomon Asante will be challenging, but he is confident about his club heading into the 2022 season. (Photo by Dominic Rivera/Cronkite News)

Epps, 27, has already shown the fans why the Rising brought him in, assisting the first goal against Louisville City after beating two defenders with some slick dribbling. Epps started on the right-wing in that game after Joey Calistri started in that spot against Kansas City.

Speaking of Calistri, he is another player looking to make up for some of the goals lost with Asante. Schantz mentioned how Calistri has been excellent in the preseason and he showed it, heading in the equalizer against Louisville City.

Aside from the front line, the rest of the lineup is beginning to solidify itself.

Returning goalkeeper Ben Lundt looks to be the top choice in net while in defense, the veteran King will start on the right side with newcomer Baboucarr Njie on the left.

In the center of the defense, James Musa and Manuel Madrid is a pairing Schantz seems to like going into the opener, provided that Madrid has recovered from an injury he sustained in the second game. In his place, Joe Farrell has been starting and staking his claim for a spot as well.

In the midfield, Kevon Lambert will likely start alongside Aodhan Quinn and Arturo Rodriguez, though Schantz has highlighted the team’s number of talented players in the midfield.

After the loss of Asante, the forward line has perhaps faced the most turnaround. Santi Moar will likely start on the left wing after scoring 16 goals to go with 4 assists last season. Joining him in the center will be either Repetto or Hurst. On the right-wing, nothing is set, but Epps and Calistri seem like the top two choices.

The Rising have four more preseason games, all behind closed doors. On Friday, they host a doubleheader, first against East Valley United, a third-division side, and then against fellow USL side, Detroit City FC. Then on Mar. 5, they’ll host another double-header, this time against Grand Canyon University and then second-division side FC Tucson.

Preseason games are primarily for players to get up to game speed before the March 12 start of the regular season. But for the Rising, which opens at home against Monterey Bay FC, there is an additional emphasis on solidifying their lineup and regaining their winning mentality.

“I think winning is everything here,” King said. “I think it’s very important, especially for the new guys who have come in, they’re starting to see how we are and what our locker room is like and what our goal is every year. It’s to win trophies and win everything.” 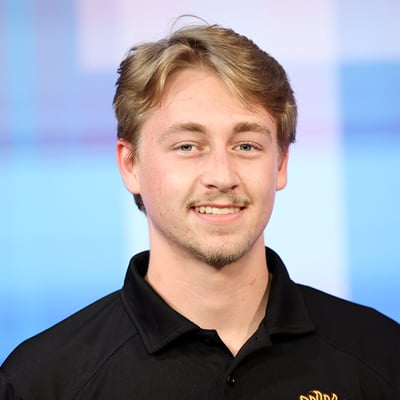 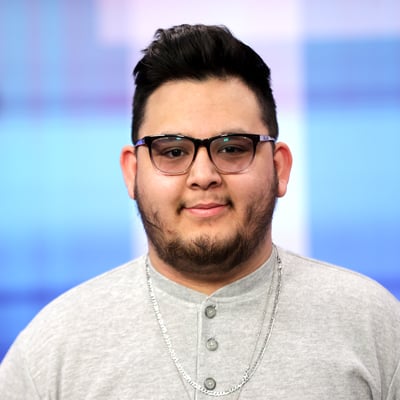