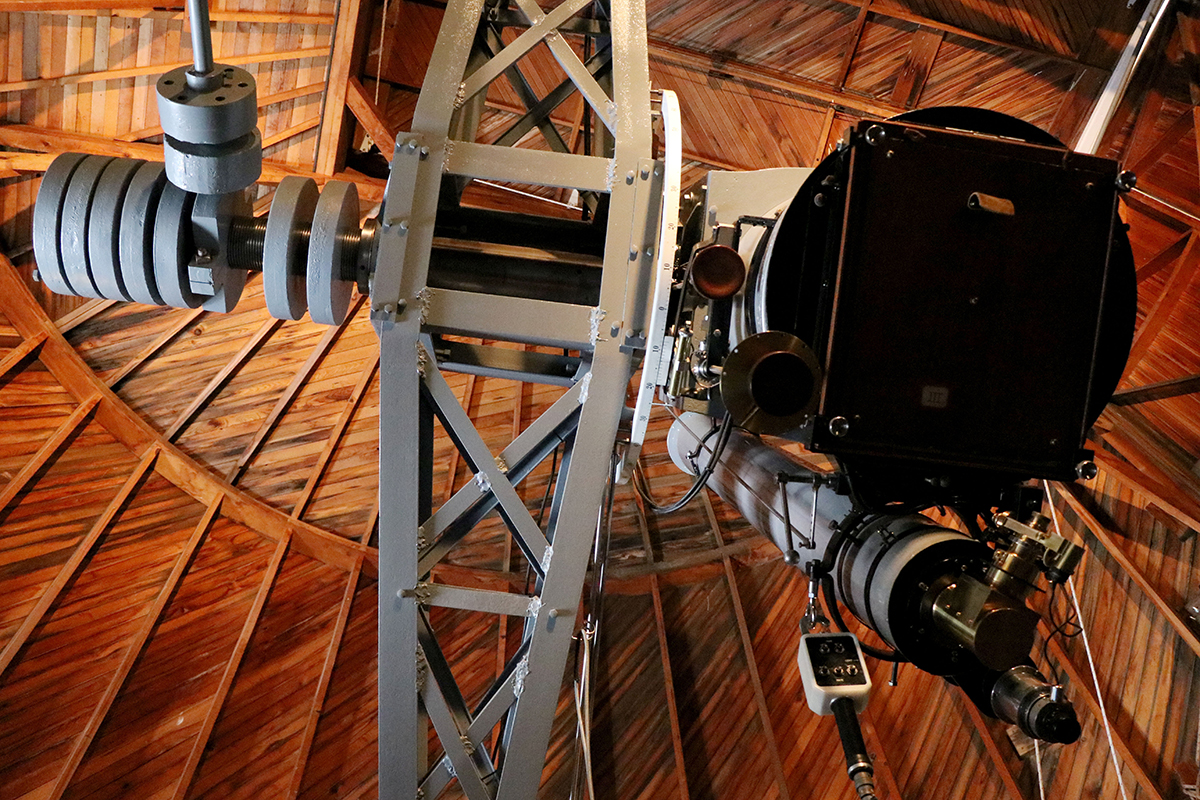 The telescope used to discover Pluto is one of the destinations on Lowell Observatory’s Pluto Tour, which takes place during the annual anniversary celebration. (Photo by Hope O’Brien/Cronkite News)

FLAGSTAFF – Clyde Tombaugh sat in the Orpheum Theater that fateful night in February 1930, waiting for clouds to pass before the 24-year-old astronomer could return to Lowell Observatory to confirm his discovery of a ninth planet in our solar system.

In that same theater 92 years later, during the I Pluto Festival celebrating the discovery, Alden Tombaugh reflected on his father’s legacy of inspiration.

When he speaks about his father, it isn’t the discovery of Pluto that he remembers most, it’s his dad’s love of sharing astronomy with others, particularly children.

“It makes me enthusiastic about the future to think that people are still interested in that process and becoming involved in planetary science or any type of astronomy and the scientific method in and of itself,” said Tombaugh, a former banker and contractor.

That same finding that brought astronomical fame to Flagstaff and the Tombaugh family has provided Lowell Observatory with a tradition they hope to continue for generations to come by celebrating one of the city’s defining scientific moments.

Kevin Schindler, who has been the historian at Lowell Observatory since 2015, hopes young children who see what happened there will be inspired by the work of Clyde Tombaugh, who died in 1997. 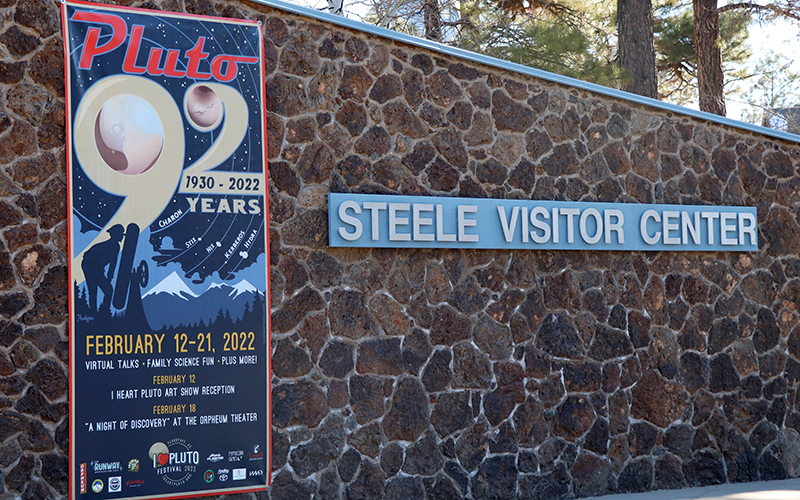 A sign outside the Steele Visitor Center at Lowell Observatory promotes the events of a nine-day celebration of Pluto’s discovery. (Photo by Hope O’Brien/Cronkite News) 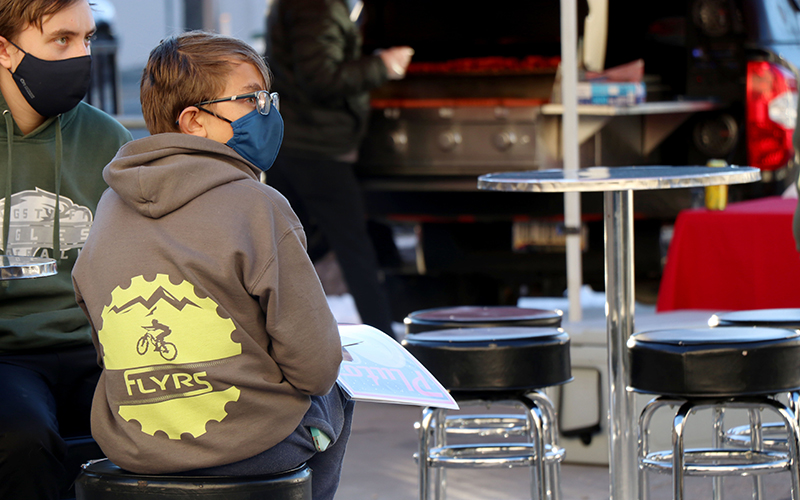 Aaron, 14, and Cameron Dick, 11, attend the Night of Discovery event hosted by Lowell Observatory. “He is a huge fan of science and space,” Aaron says of Cameron. (Photo by Hope O’Brien/Cronkite News) 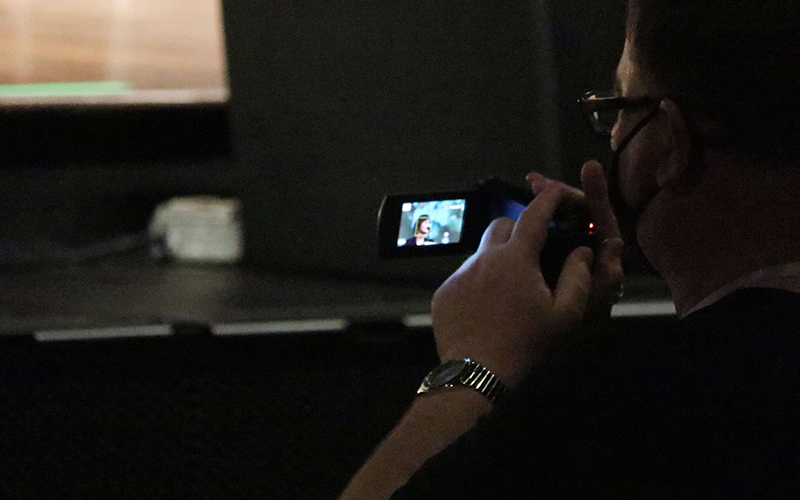 Eric Kremer films the introduction of speakers at the Night of Discovery event hosted by Lowell Observatory. Kremer was inspired to write Clyde Tombaugh after reading his book “Out of the Darkness: The Planet Pluto,” when Kremer was 13. Tombaugh wrote him back, he says. (Photo by Hope O’Brien/Cronkite News)

Children like Cameron Dick, 11, who’s interested in black holes and theoretical physics. He lives in a city where science is in the backyard and events like the I Pluto Festival provide an outlet for new generations of Arizonans interested in science.

Aaron Dick, Cameron’s father, said he hopes his children take away an appreciation of “science and learning about research and how to do research.”

At Lowell, just a mile up the road from the theater, visitors follow a path of descriptive signs and busts, named the Pluto Walk, leading to the room where Clyde Tombaugh spent hours peering into the heavens.

Schindler said the discovery of Pluto – even though Pluto now is designated a dwarf planet – has shaped Flagstaff and northern Arizona.

When Schindler speaks of Tombaugh’s discovery, it’s with admiration and awe that it still moves young people nearly a century later.

“He was 24 years old when he discovered this planet,” Schindler said, “and so when he was younger, he spent a lot of nights by himself on the farm, building his own telescopes. He just found it interesting, so I think it’s inspiring to think that anybody could achieve this.” 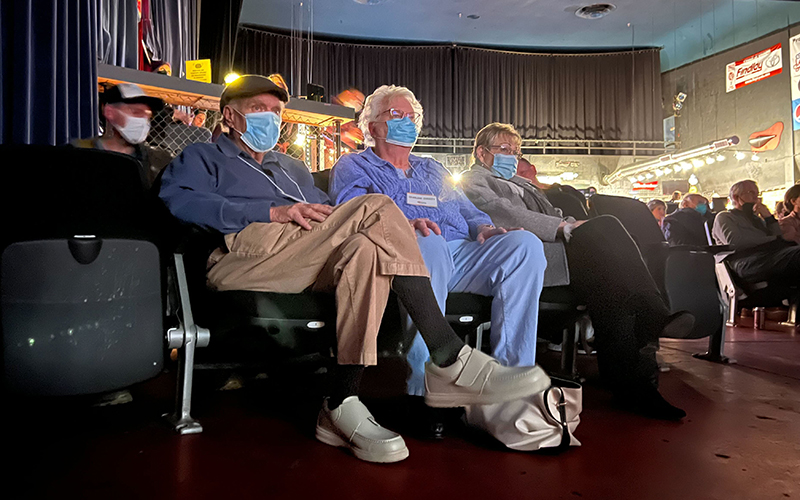 James and Charlene Christy attend Lowell Observatory’s I Pluto 2022 Festival at the Orpheum Theater in Flagstaff on Friday, Feb. 18, 2022. “A lot of husbands promised their wives the moon, but mine delivered,” says Charlene Christy, whose husband named Pluto’s biggest moon after her. (Photo by Hope O’Brien/Cronkite News) 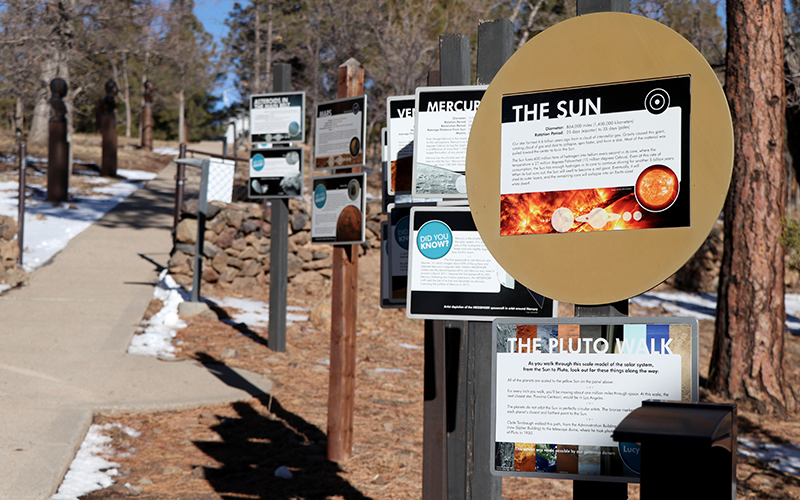 The Pluto Walk at Lowell Observatory allows guests to walk a scale model of the solar system along the path Clyde Tombaugh once took leading to the telescope dome where he discovered Pluto. (Photo by Hope O’Brien/Cronkite News) 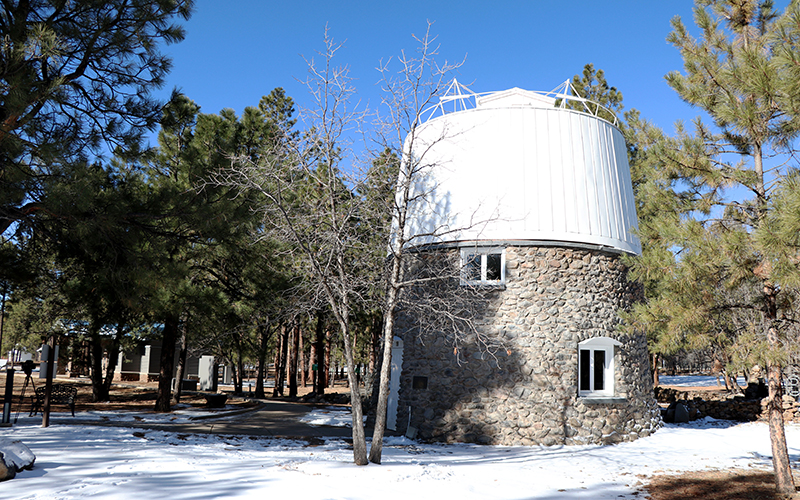 He gave her the moon

James Christy, who was an astronomer at the U.S. Naval Observatory in Flagstaff, was among the I Pluto celebrants at the Orpheum on Feb. 18.

In 1978, nearly a half century after Tombaugh’s discovery, Christy noticed a discrepancy on some of the slides picturing Pluto – a discrepancy that later would prove to be Pluto’s largest moon.

The astronomer emphasized the most important piece of his tale: how he chose the moon’s name.

Christy wanted to combine Char, the diminutive for Charlene, his wife’s name, with “on,” an ending used for newly discovered particles. But because planets and their moons traditionally are named after figures in Greek and Roman mythology, Christy told his wife Charon wouldn’t work. But a quick look in a dictionary saved the day: Charon was the ferryman of souls across the River Styx in Greek mythology. 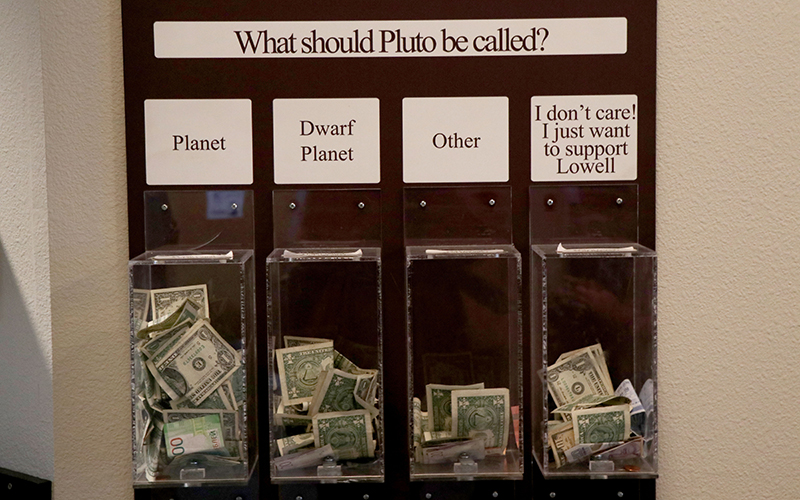 A case on the wall of Lowell Observatory’s Steele Visitor Center allows visitors to vote on whether Pluto is a planet or a dwarf planet. “It doesn’t stand for anything officially, but it’s a fun way to raise some money and show people’s voice,” Lowell Observatory historian Kevin Schindler says. (Photo by Hope O’Brien/Cronkite News) 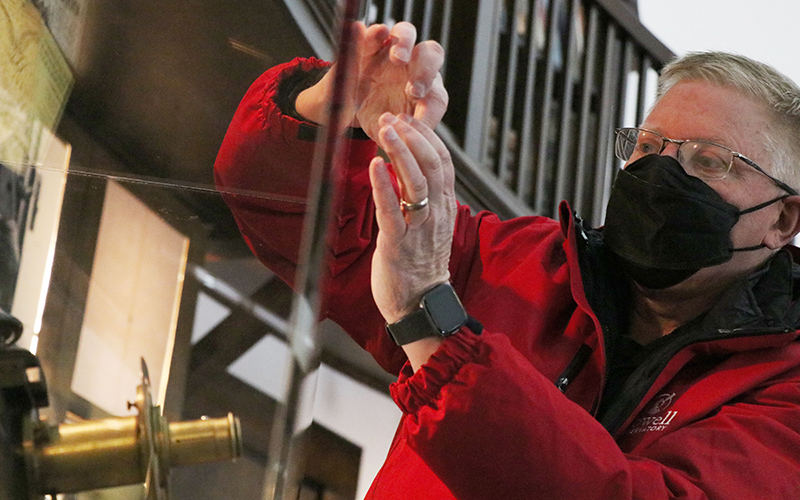 “This is the machine that he used to make the discovery today,” historian Kevin Schindler says of the blink comparator in Lowell Observatory’s rotunda. “We have modern computers doing this stuff, but he estimated he was working here for a year and spent another 14 years after the discovery looking for other stuff, and he estimates he spent 7,000 hours looking through the eyepiece.” (Photo by Hope O’Brien/Cronkite News) 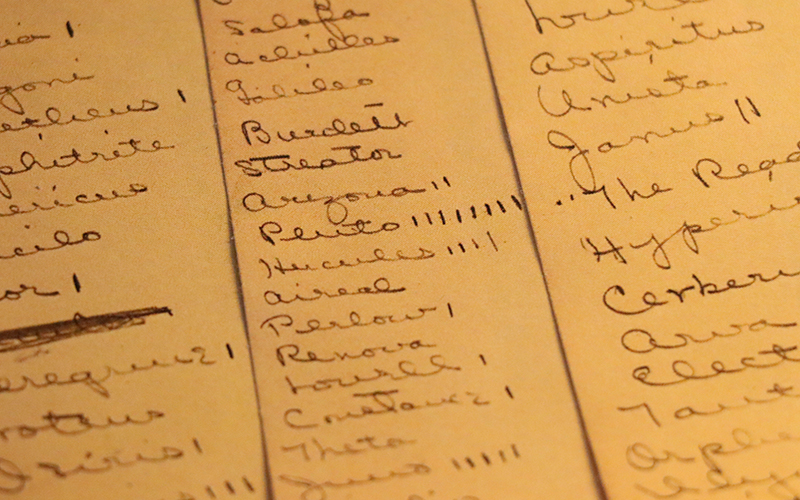 An original list of potential names for the planet Clyde Tombaugh discovered in 1930 is on display at the Lowell Observatory. Pluto was a name suggested in a letter to Tombaugh by Venetia Burney Phair, an 11-year-old from England. (Photo by Hope O’Brien/Cronkite News)

In 2006, astronomers at the meeting of the International Astronomical Union voted to demote Pluto to dwarf status, arguing it didn’t meet the union’s criteria for being a full-size planet because it has not become gravitationally dominant – known in astronomy circles as “clearing the neighborhood” around its orbit.

That decision has been widely debated, particularly at Lowell Observatory.

The decision, Schindler said, was made on the final day of the union’s meeting, when fewer members were present.

“That’s just not how science is done,” he said. “Science is done by acclamation, not by voting, but based on the evidence.”