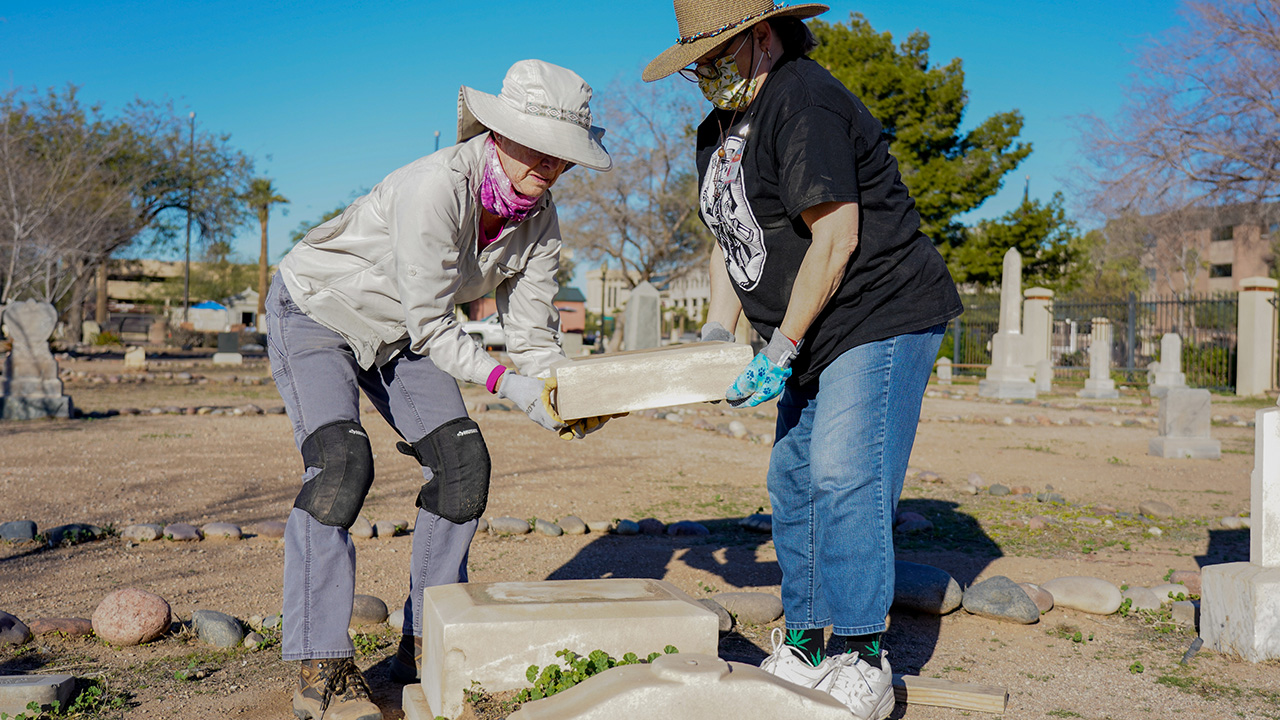 Patty Gault, president of the Pioneers’ Cemetery Association, left, and volunteer Vicki Galli remove the stone walls of a cradle grave at Pioneer Military & Memorial Park in Phoenix on Feb. 10, 2022. The grave belonged to Amy Walbridge, who died in 1893 at age 5. (Photo by Samantha Chow/Cronkite News) 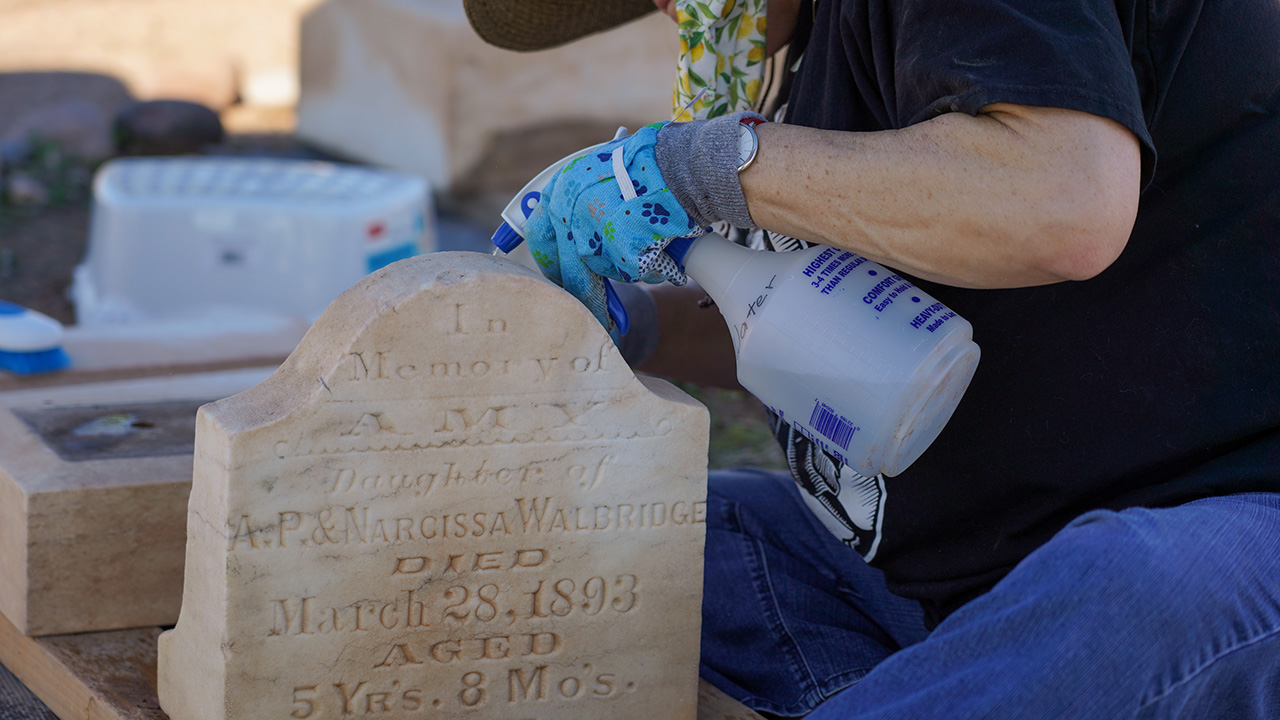 Volunteer Vicki Galli cleans the headstone of 5-year-old Amy Walbridge with a spray bottle and brush at Pioneer Military & Memorial Park in Phoenix on Feb. 10, 2022. The cradle grave will later be reassembled using a setting. (Photo by Samantha Chow/Cronkite News) 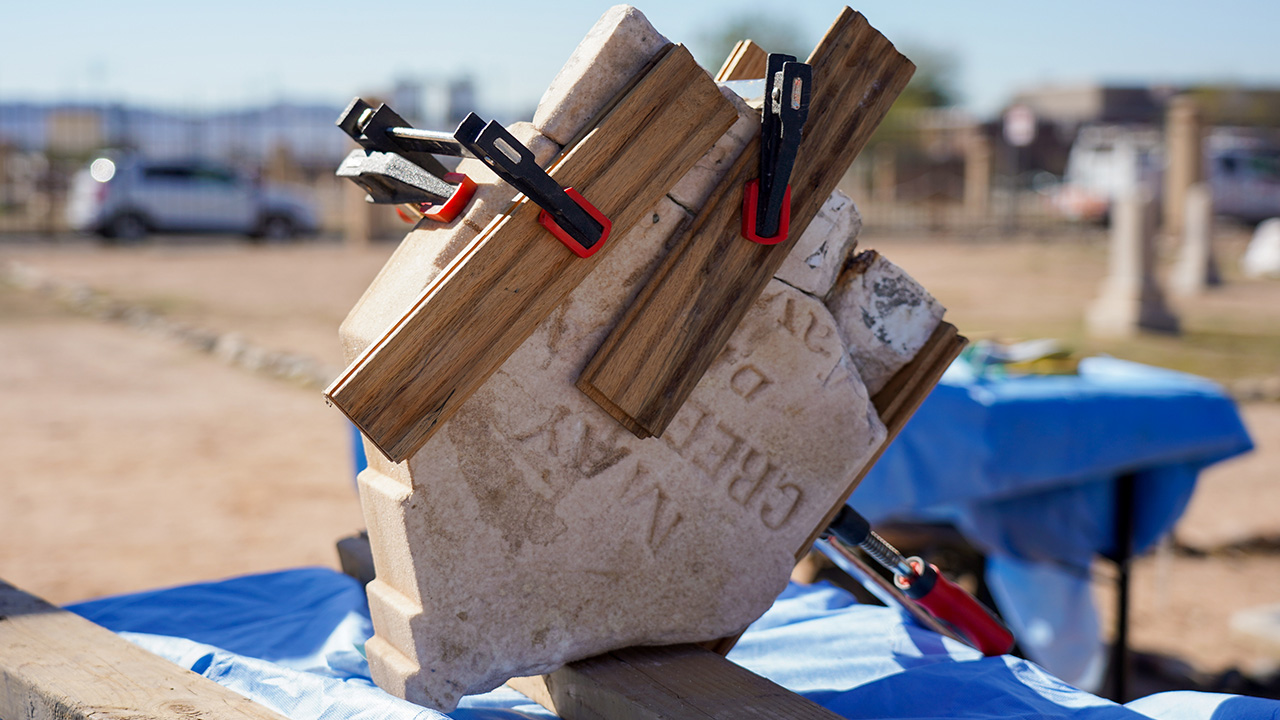 With the help of some epoxy, wooden slats and clamps, a headstone is reassembled and left to dry in the sun at Pioneer Military & Memorial Park in Phoenix on Feb. 10, 2022. (Photo by Samantha Chow/Cronkite News) 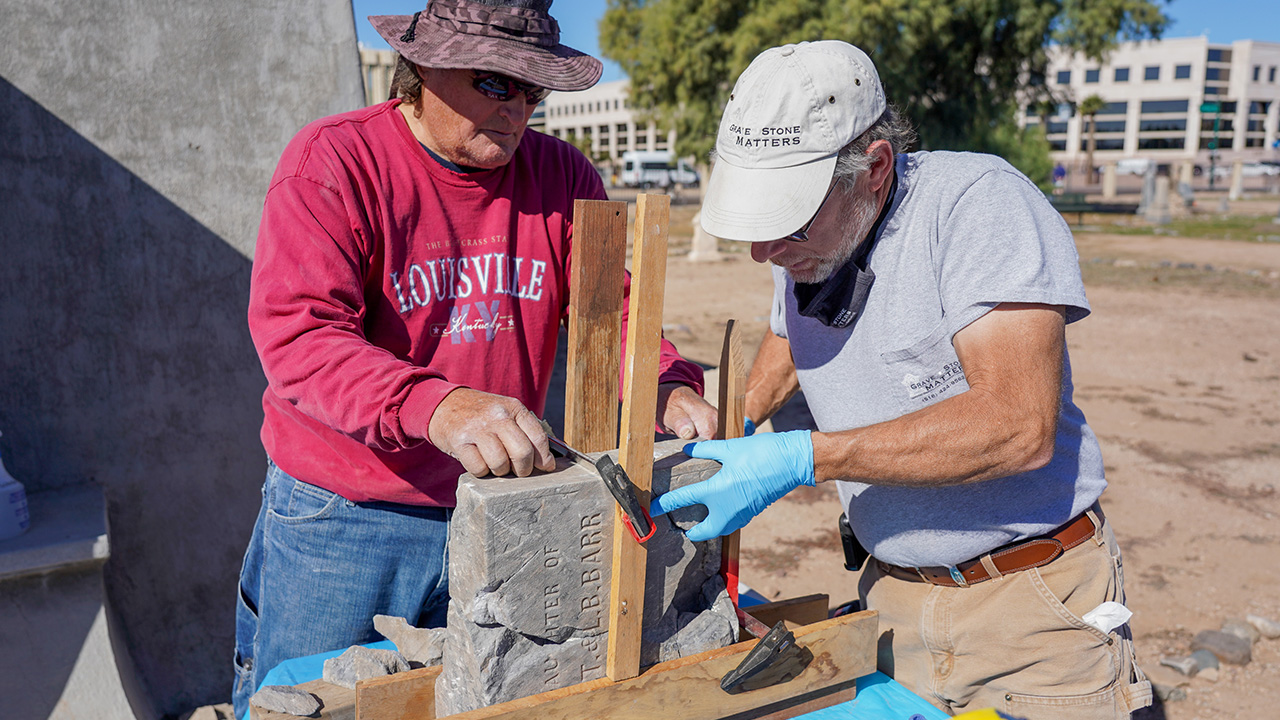 Volunteer Steven Lee, left, and conservator Joe Ferrannini reassemble a broken headstone using epoxy and clamps at Pioneer Military & Memorial Park in Phoenix on Feb. 10, 2022. The Pioneers’ Cemetery Association was able to hire Ferrannini, who’s from New York, after receiving a grant from the Daughters of the American Revolution. (Photo by Samantha Chow/Cronkite News) 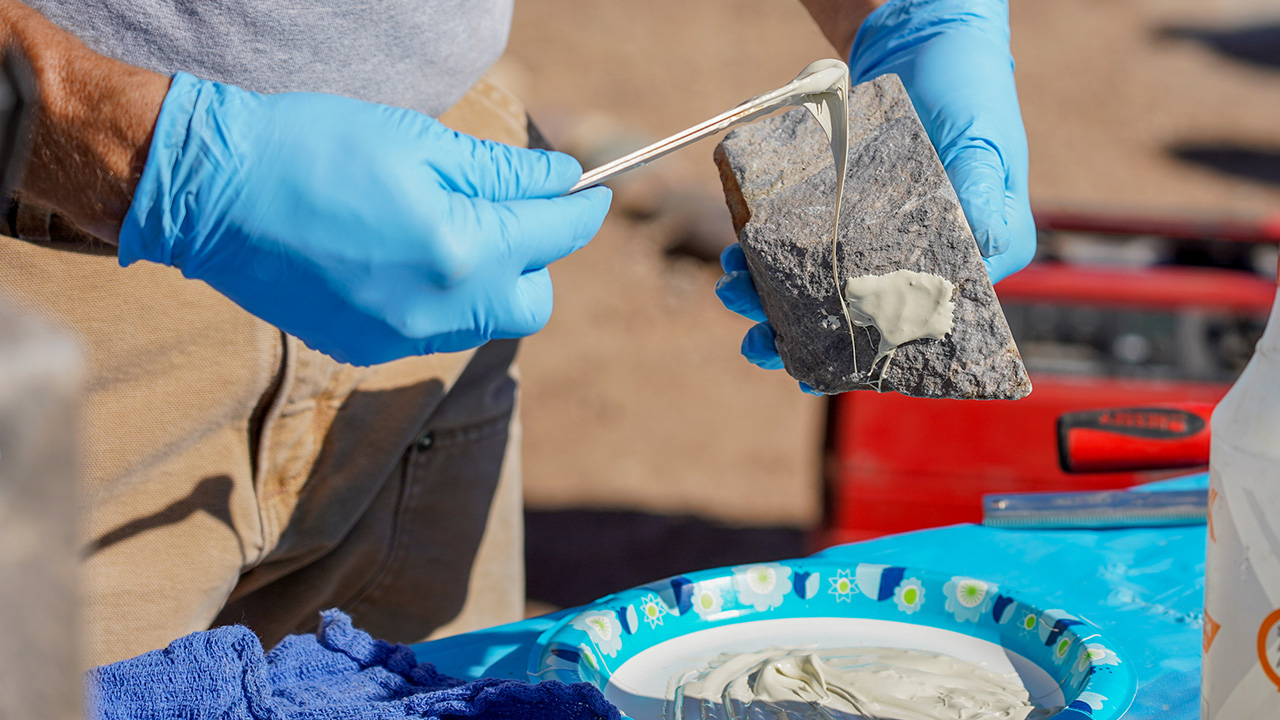 Conservator Joe Ferrannini applies epoxy to a fractured piece of headstone at Pioneer Military & Memorial Park in Phoenix on Feb. 10, 2022. Ferrannini says it’s important to not to completely cover the stone in epoxy, as it needs to breathe and expand over time. (Photo by Samantha Chow/Cronkite News)

PHOENIX – One of Arizona’s oldest settler cemeteries – Pioneer Military & Memorial Park – is an 11-acre dirt lot east of the Capitol where more than 3,700 people are believed to be buried.

But there are only 600 grave markers, and many are in poor condition, according to Cindy Lee, vice president of the Pioneers’ Cemetery Association, which labors to preserve the long-neglected site at 15th and Jefferson avenues.

The park, comprising seven cemeteries that were used from 1884 to 1914, was poorly maintained after it was closed. Some of the headstones and grave markers have shifted, cracked or even fallen.

“When I came here with a friend, I noticed it was sad,” Lee said. “A lot of these people are the townspeople of Phoenix … and they need to be respected.”

The deceased include veterans of the Indian wars, the Mexican-American War, both sides of the Civil War, as well as Rough Riders and Buffalo Soldiers. Luminaries include Darrell Dupa, who’s credited with naming Phoenix and Tempe, and Jacob Waltz, the fabled “Lost Dutchman” of the Superstition Mountains. Many Hispanic names are included on the list of those buried.

Founded in 1983, the nonprofit Pioneers’ Cemetery Association uses volunteers and donations to preserve the park, from straightening headstones to reassembling fractured pieces.

On Feb. 10, volunteers began preservation work on a cradle gravestone belonging to Amy Walbridge, who was 5 when she died in 1893.

The cradle’s stones were placed on top of each other rather than secured with mortar. To preserve the marker, volunteers removed the stones for cleaning and assembled them with a setting compound.

But sometimes the restoration work is too complex for volunteers, so a professional is brought in.

For decades, fragments of several headstones sat in an empty mausoleum at the cemetery because they were too complicated to fix. But with the help of a grant from the Daughters of the American Revolution, the Pioneers’ Cemetery Association hired Joe Ferrannini, a conservator and owner of Grave Stone Matters in upstate New York.

“When things just fall over, I can easily pick them back up and put them back together,” Ferrannini said. “(But) when they get picked up and moved around to another location, it makes it harder.”

It typically takes several days before a preserved headstone is ready to be returned to its site. First, volunteers must locate the broken pieces, which can take several days of searching the grounds. The pieces are then reassembled with epoxy. Once that has dried, voids and cracks are filled with a lime-based patching material.

“We’re not trying to make them look new, we’re just trying to preserve everything we have and make them stable,” Ferrannini said.

With some research, the association then finds the original location of the headstone.

“It’s time to bring these stones home to the grave that they belong to,” Lee said.