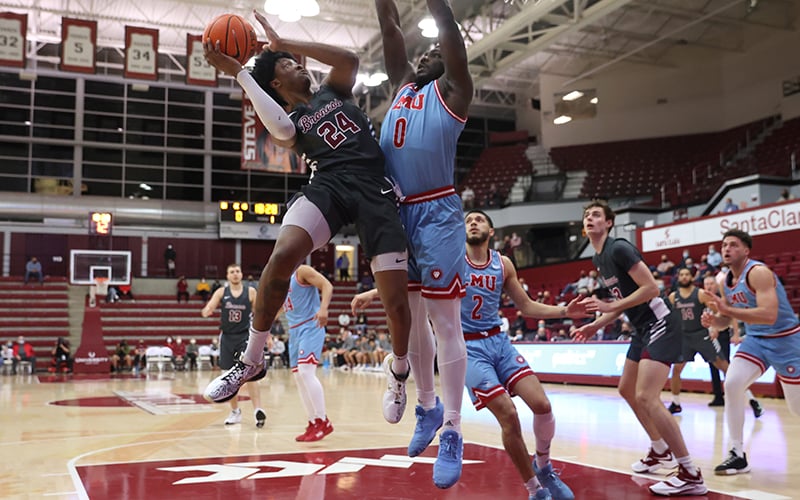 Jalen Williams sprouted from less than 6-feet tall to 6-6 in a matter of a few years. Santa Clara still listed him as a 6-3 guard when he signed his national letter of intent. (Photo courtesy of Don Jedlovec/Santa Clara Athletics)

PHOENIX – His Twitter bio reads simply: “Just a rose who grew from the concrete.”

It’s the perfect metaphor for Jalen Williams, one of college basketball’s best kept secrets who is blossoming into a star at Santa Clara.

The 6-foot-6-inch junior guard has been dismantling opponents for the Broncos, who are 17-9 overall and 7-4 in the West Coast Conference, trailing only nationally ranked Gonzaga and St. Mary’s in their league.

“It doesn’t really matter what the defense does, he’s able to read and react and make plays. He’s able to use his IQ and talent to be successful out there,” said Jason Ludwig, an assistant men’s basketball coach at Santa Clara.

It’s no accident. Years of hard work and dedication to his craft are paying off for Williams, who grew up in Gilbert and played at Perry High School there after his family moved from Colorado when he was 7-years old.

Despite those Arizona and Colorado roots, Williams grew up a Los Angeles Lakers fan, idolizing the late Lakers superstar, Kobe Bryant. He even wears No. 24, which was Bryant’s number from 2007-16.

“Kobe is my reason for picking up a ball and wanting to play the game. I try to model his mentality and I try to take bits and pieces from how he may have approached the game and incorporate it into something that I feel is relatable,” said Williams. 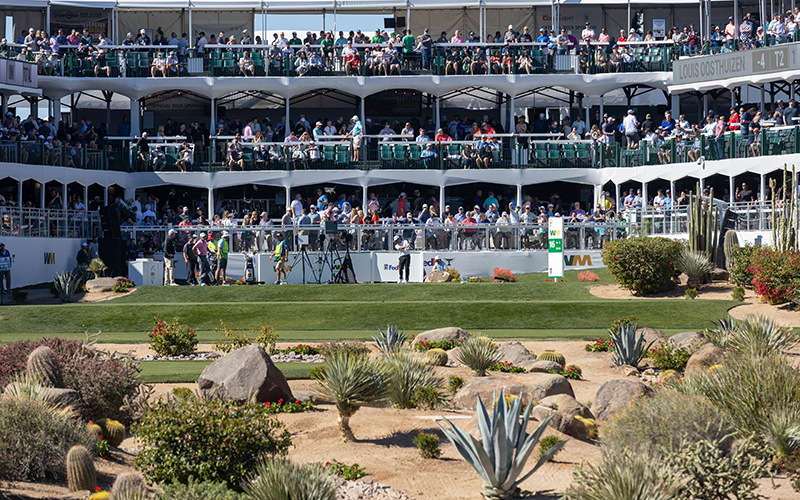 Both of his parents were members of the U.S. Air Force, so discipline was hard-wired into Williams’ DNA. Combine that with his modeling of Bryant’s legendary “Mamba Mentality,” and it is no surprise that Williams has developed a Bryant-like work ethic.

A point guard listed at about 6-feet tall at Perry High, Williams experienced something unexpected. He grew. A lot. And fast.

Williams sprouted from less than 6-feet tall to 6’6″ in a matter of a few years. The Broncos still listed him as a 6-3 guard when he signed his national letter of intent.

He needed some time to mature into his new frame after the growth spurt, but retained the same playmaking skills. The result is scary for defenders. Few players possess the ability to stop a 6’6″ guard with the blend of length, ball-handling, shooting and strength that Williams has.

His game has grown as fast as his body.

“It’s a steady growth,” Ludwig said. “He’s able to score at every level. He’s shooting it well. He’s finishing at a tremendous rate. He’s a tremendous passer, and he can create for himself and others. Our system fits him very well.”

Using an array of step-backs and spin moves in the lane, Williams has a trick up his sleeve to get a shot off in just about any situation, whether he is on the perimeter or driving to the hoop.

It didn’t help that he was coming off an injury that kept him from playing for a couple months heading into his sophomore season. Plus, COVID-19 protocols forced the Broncos to live out of a hotel for the entire season with limited gym access. 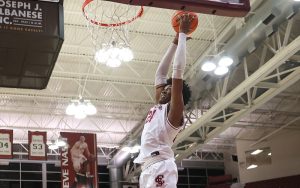 Williams grew up in Gilbert and fine-tuned his skills at Perry High School. (Photo courtesy of Don Jedlovec/Santa Clara Athletics)

Despite it all, Williams’ belief in himself never wavered.

“Not shooting for months, then playing right away with no certain gym time, it certainly didn’t help,” he said. “But it’s just more of a confidence thing. I know I can shoot the ball, so I wasn’t too worried about it. I knew once I got back in the gym I’d be fine.”

With players and coaches living together in a hotel for an entire season, there was also the potential for division within the team. Instead, the experience brought the team closer together.

It’s something that Broncos coach Herb Sendek, a former Arizona State head coach, doesn’t take for granted. During the preseason, he called the Broncos “reinvigorated.” And their play this season supports the notion.

“Compared to last year, we feel like we are in heaven because we are actually able to be in the gym together,” Sendek said. “We have a tremendous group of young men. They get along with each other exceptionally well.”

By breaking through the cracks this season, Williams has caught the attention of NBA scouts, according to Ludwig. While he is humbled by the attention, Williams is concentrating on the Broncos’ season – and winning – for now. 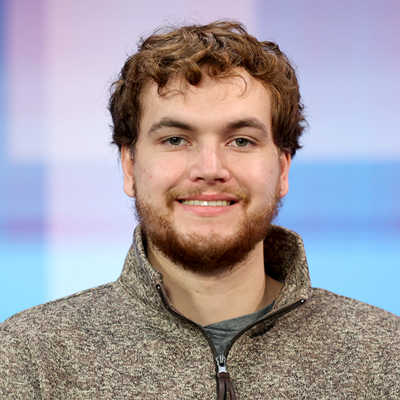