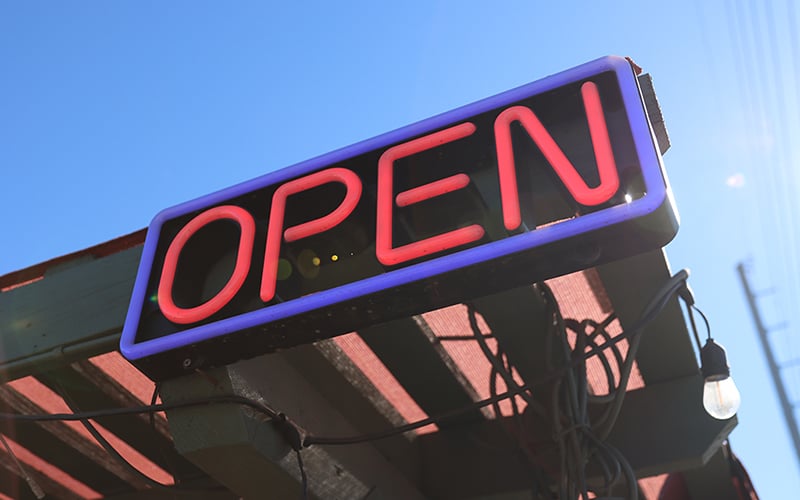 Arizona’s economy is operating at 97% of where it was in March 2020, according to the Back-to-Normal Index, published by Moody’s Analytics and CNN. (Photo by Troy Hill/Cronkite News)

PHOENIX – As the world nears the second anniversary of the COVID-19 pandemic next month, analysts say the U.S. economy is almost entirely “back to normal.”

Arizona’s economy is operating at 97% of where it was in March 2020, according to the Back-to-Normal Index, published by Moody’s Analytics and CNN. The index uses data from 37 national and seven state-level indicators to track such factors as unemployment, job growth and inflation.

Mark Zandi, chief economist of Moody’s Analytics, said he is “sanguine” about the country’s economic outlook by the end of the year, with employment expected to return to pre-pandemic standards and inflation moderated by mid-2023. He spoke in a webinar last week with Moody’s held by the Association for Business Journalists.

“Lots of assumptions go into that, and the key one is the pandemic,” Zandi said. “I’m assuming the pandemic continues to wind down. What I mean by that is that, while it’s likely we’ll suffer future waves of the pandemic, each wave will be less disruptive to the health care system and to the economy than the previous wave.”

CORRECTION: An earlier version of this story included outdated data from the Back-to-Normal Index, published by Moody’s Analytics and CNN. As of Feb. 8, 2022, the U.S. as a whole is operating at 89% normalcy, with Arizona’s economy ranking second in the nation. The index is updated weekly. The story has been corrected, but clients who used earlier versions are asked to run the correction found here.

The U.S. as a whole is operating at 89% normalcy, with Arizona’s economy ranked second in the nation, according to Feb. 8 data from the Back-to-Normal Index, the most recent at publication. The index is updated weekly.

Lee McPheters, a research professor of economics in Arizona State University’s W.P. Carey School of Business, said Arizona’s economy is heating up and will continue to grow throughout the year.

Normally, he said, Arizona’s economy is assumed to be based largely on construction and real estate. Recently, though, the state has added numerous jobs in such sectors as science and technology, finance, health care, and leisure and hospitality.

“Arizona is doing better than most states, based on the information we have available,” McPheters said. “Looking at job growth, for example, it looks like for 2021, we’re going to have added about 95,000 new jobs. And we’re probably going to be in the top 10 states for job growth.”

What this means for 2022, he said, is that Arizona has a good chance of being in the top 5 states for employment growth, based on trends from last year.

“We look back to February 2020, before there was any pandemic, and at that time, Arizona had 2.9 million people working,” McPheters said. “In the next two months, Arizona lost over 330,000 jobs. Since that time, we have now finally gained all those back. Therefore, just looking at job growth as your single indicator, you would say that Arizona is in fact 100% recovered.”

As of December 2021, Arizona’s unemployment rate is 4.1%, which McPheters called “really solid.” He said Arizona tends to have a slightly higher rate of unemployment because of the large number of people moving to the state, who might find a house or apartment first before they settle into a job, something he called a “good problem to have.”

These unemployment numbers exist at a time when workers in low-paying jobs, such as food service and retail, reportedly are quitting in droves, a phenomenon known as the “great resignation.” McPheters said the trend is made possible by a fast-growing economy.

“People quit with the optimism that they’re going to be able to move on to something better,” he said. “There’s a lot of ‘Help wanted’ signs all over the place, so you’re going to have people moving from one job to another, and of course, they’re going to want to move to a better job.”

As a whole, Arizona actually has seen dramatic wage increases: up to the double digits in recent years, McPheters said. He attributes the recent increase in inflation partially to these wage increases.

“When we’re in a period of strong recovery, businesses have to attract workers, and that puts pressure on wages, so wages go up,” McPheters said. “But in a way, it’s a good problem to have, that wages are going up. Because for a long time, they were kind of slow moving, nationally and in Arizona.”

Zandi said a number of other factors contribute to inflation as well, including supply chain disruptions and frontline workers getting sick, causing temporary labor shortages.

“Let me just say there are a number of reasons for the higher inflation, and all of them go back to the pandemic and the disruptions created by the pandemic,” Zandi said. “Wage growth has not been the single most significant factor behind the acceleration in inflation to date.”

As the country and the world continues to make progress in ending the pandemic through vaccinations and the development of better treatments for those infected by COVID-19, Zandi said, the economy can be reasonably expected to continue to grow until the entire U.S. is back operating at pre-pandemic standards.

“I think we’re all getting to a place where we’re feeling that we just got to live with the virus,” Zandi said. “You know, it’s not going away easily. It’s more endemic, and we just have to live with it and learn how to navigate around it. But on top of that, we’re learning how to work through the constraints on our economy as a result of the pandemic.”