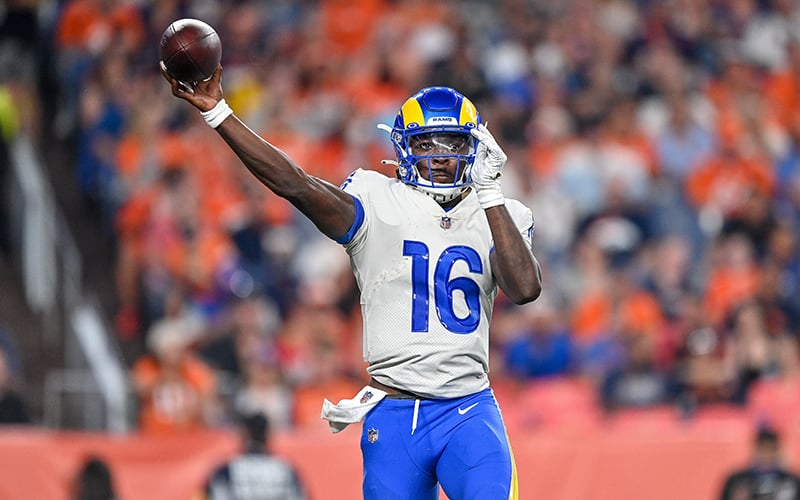 Bryce Perkins’ journey from Chandler High School to Super Bowl LVI was a challenging one, but as he awaits kickoff Sunday, he believes it was all worth it. (Photo by Dustin Bradford/Getty Images)

PHOENIX – Although most eyes are on Super Bowl quarterbacks Joe Burrow and Matthew Stafford, Valley football fans have interest, too, in the Los Angeles Rams’ third string quarterback.

Perkins is a familiar name in the state because of stops at Chandler High School, Arizona State and Arizona Western. Although the Valley native is now one game away from the title of Super Bowl champion – the Rams face the Cincinnati Bengals Sunday – his journey to the big game was not easy.

He was first spotted in middle school by Chandler High coach Rick Garretson, who noted the quarterback did not “look like an eighth grader.”

Doubters were everywhere. They applauded his athleticism but questioned if he could excel at quarterback.

That motivated him and he soon proved people wrong, posting 5,332 passing yards, 1,609 rushing yards and a total of 97 touchdowns (including one as a receiver). He helped Chandler High with a championship his senior year, something that hadn’t occurred since 1949.

His legacy helped shape the culture of Wolves football today. 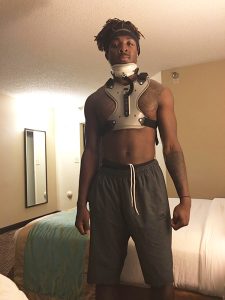 “We always tell the kids here that Chandler football matters to those who have been through it and around it in the past,” Garretson said. “Anytime he’s in town, he always stops by to say hi and work out over here as well so we stay in touch. He just did some amazing things and he was the first to really be the pioneer to kind of lead that way.”

His dream of become a hometown hero and local college quarterback did not go as planned. As a a sophomore at Arizona State, wearing a no-contact jersey, he accidentally collided with safety Deion Guinard during a morning practice. On a read-option, with his neck down, he ran into Guinard and caused what was more than a minor injury.

CT scans revealed that he fractured two vertebrae (C4 and C5). The serious injury gave him two options: an operation that would would force him to end his playing days, or an approach that would let him heal naturally in a neck brace, giving him a chance to compete again.

Before making a final decision, he visited renowned spine surgeon Robert Watkins, who has treated both J.J. Watt and Peyton Manning.

“There was a doctor that wanted to do surgery immediately and if he had to do surgery immediately then it would have been career over,” said Bruce Perkins, Bryce’s dad and a former NFL running back. “Instead, my wife, son and I all prayed and we believe there’s power in prayer. We believe that the Lord put it in our heart that we need to go get a second opinion and thankfully we did that. The surgeon was a reputable spine doctor out in California that we went out and saw to get a second opinion. Then, things healed up. And we followed the process.”

He was cleared to return months later in the spring but he was competing against returning starter Manny Wilkins and Alabama transfer Blake Barnett. ASU discussed changing his position but that was not in Bryce’s plans so he felt it left him one option: transfer. 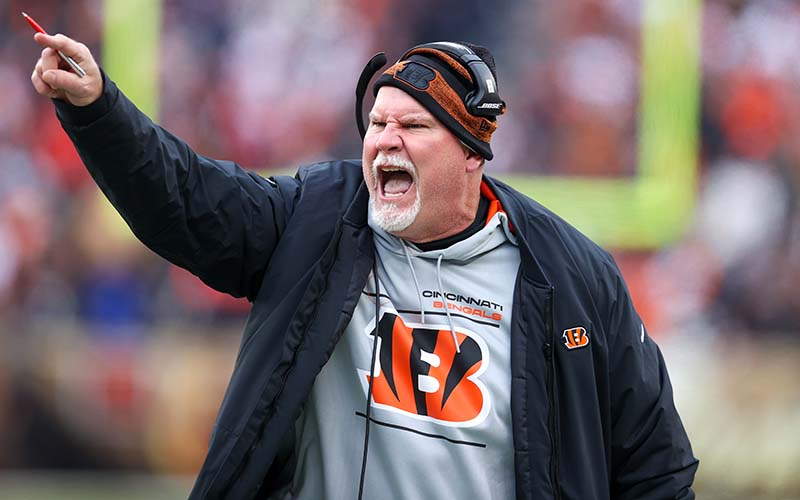 In an attempt to bolster his profile, he took what many saw as a risk and stayed local, transferring to Arizona Western, a community college in Yuma. The risk was worthwhile as Perkins took the No. 2 Matadors to the national championship, ultimately falling to East Mississippi.

The defeat hurt but he accomplished his goal and attracted the attention of the University of Virginia.

Just like he did in Chandler, Perkins left a legacy, taking the Cavaliers to their first postseason win since 2005, to the 2019 Atlantic Coast Conference championship game and to an Orange Bowl.

Next up: the NFL Draft.

“Bryce has overcome a lot of obstacles, a lot of naysayers,” said Bryce’s mom, Lynette. “Through it all, he has been so determined and motivated and self-confident that he could do it and that he would be where he is.”

Bruce added that “it has been quite a ride. To go through what he has, I do not know who else could overcome what he has and it’s a blessing.”

After he went undrafted, he signed with the Rams as a free agent and worked his way to third-string quarterback status.

Now he’s in the Super Bowl. 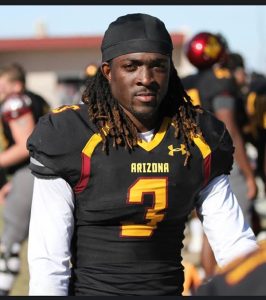 Perkins had dreams of being a hometown hero when he committed to play quarterback at Arizona State. (Photo courtesy of Bruce Perkins)

He became the fourth Perkins family member to make it to the NFL, following in the footsteps of his uncle Don Perkins, former fullback for the Cowboys, his dad Bruce and brother Paul Perkins, who played running back in the NFL.

It is not just his talent but his character that coaches point out. What you see on the football field, they say, reflects the man he is outside the lines.

“When you’re playing football, it’s almost a magnifying glass of how you actually are off the field and there’s no truer statement than for Bryce,” Paul Perkins said. “Bryce, when you see him on the field, he is calm. He’s in control of his emotions, and he understands what’s going on in the surroundings.

“He’s very calm. He doesn’t get too high, too low. He doesn’t get extremely sad or extremely mad at situations and … his friend group, they love them, they will in a football sense go to war for him and they’ll do anything for him. And that’s just a testament to how good of a person he is to his friends and to his teammates and just the genuineness of his character.”

Sunday will be special. He will be the first Perkins to make it to a Super Bowl. It is not something he takes for granted.