Electric jolt: Arizona to get millions to develop EV-charging network 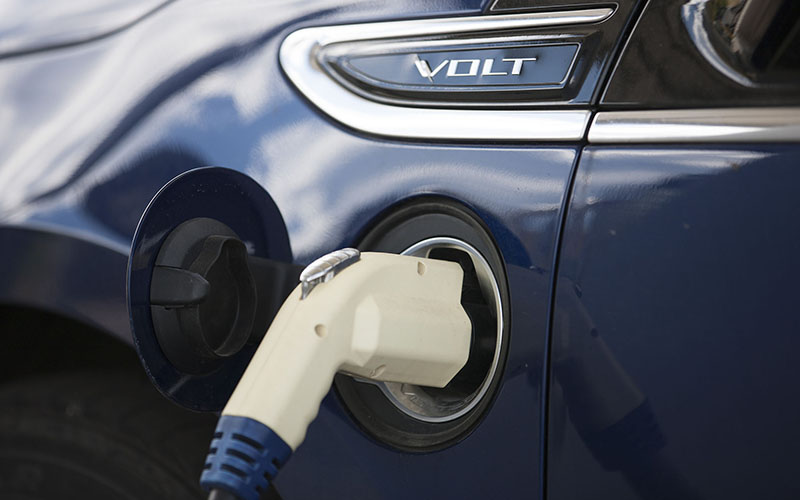 Arizona had the seventh-highest number of electric vehicles in the nation in 2020, but advocates say a hurdle to increased ownership – in Arizona and the rest of the U.S. – is a shortage of charging stations. A new federal program would create 500,000 stations nationwide. (Photo by Matthew Staver/U.S. Department of Energy)

WASHINGTON – Arizona stands to get up to $76.5 million over the next five years to develop electric vehicle charging stations along interstate corridors, in hopes of increasing EV ownership by reducing range anxiety for drivers.

The grant is the state’s share of a five-year, $5 billion program unveiled Thursday by the U.S. Department of Transportation that aims to expand the number of charging stations from the current 47,055 to more than 500,000. The National Electric Vehicle Infrastructure program is part of the $1.2 trillion Infrastructure Investment and Jobs Act passed last fall.

The first round of funds will come this year, with Arizona in line to get $11.3 million in fiscal 2022, money that electric vehicle advocates say is badly needed in a state with large rural areas that lack stations.

“It’s going to really help to have these new charging stations that hopefully … fill in some of these holes,” said Jim Stack, president of the Phoenix chapter of the Electric Auto Association. He said EV owners are eager to see the infrastructure in more rural areas where “there aren’t too many charging spots.”

The first phase of the program will target interstate highway corridors to help with long-distance EV travel. A second phase, expected to be announced later this year, will focus on underserved and rural areas.

“The reality is nobody benefits more from EVs, in principle, than those who drive the longest distances, which is often our rural Americans,” Transportation Secretary Pete Buttigieg said Thursday as the program was announced.

Buttigieg said the program will “help to create jobs, fight the climate change crisis and ensure that this game-changing technology is affordable and accessible for every American.”

An Arizona Department of Transportation spokesperson said Thursday that the agency is studying the federal program and “it’s too early to go into detail.” But Garin Groff said the department plans to meet the Aug. 1 deadline for states to submit proposals for funding to the federal government.

“To determine what will be in the plan, ADOT will work with other state agencies, municipal planning agencies and the public to develop a proposal for electric vehicle charging stations along designated alternate fuel corridors,” Groff said in an emailed statement. “The work will include determining proposed locations for the charging stations.”

Proposals will be reviewed by the new Joint Office of Energy and Transportation, which will “help every state decide on how and where they’re going to be establishing these chargers,” Energy Secretary Jennifer Granholm said during the news conference with Buttigieg.

He said federal partnership with states and the private sector could help accelerate and “build a nationwide network of EV chargers by 2030.” But Buttigieg also said the program is flexible enough that states can use the funding for operations and maintenance of current stations.

Arizona currently has 861 public charging stations, which offer 2,211 ports – or outlets – where an individual vehicle can plug in, according to the Energy Department’s Alternative Fuels Data Center.

The center said Arizona also had 28,770 registered electric vehicles by the end of 2020, the seventh-most among states. It was in sixth place among states for EV ownership per 1,000 residents that year.

Even though states will have to go through the federal government to get funding for the charging station program, that extra layer is “essential,” said Marc Geller, a spokesperson for the Electric Vehicle Association. He said federal oversight of charging infrastructure will ensure that the system is compatible nationwide.

“We want to have a complete and functioning network of charging stations across the country,” Geller said. “It’s not going to help someone who’s driving in Arizona, if they cross into New Mexico and suddenly there’s an incompatibility.”