Lindsay Lopez led the team in wins and innings pitched while having the lowest ERA. She returns for her junior season. (Photo by Harrison Zhang/Cronkite News)

TEMPE – After an early exit in the Tempe Regional of the NCAA Tournament last season, ASU softball coach Trisha Ford lost six players to graduation and three to the transfer portal. Two others elected to leave the program.

With nearly half her 25-player roster gone, Ford had to go back to the drawing board. She added a pair of transfers from the Southeastern Conference and three highly rated recruits to her core of nine experienced players from last year’s team. Despite all the new faces and the relative youth of the squad, she expects faces both new and old to be key contributors to what she believes could be a special season.

The No. 21 Sun Devils also know they will encounter some bumps along the way. They opened their season with an 8-0 victory over California Baptist but fell 5-2 Friday to Oklahoma State.

The biggest holes left behind from the 2021 team are at center field and catcher, previously occupied by graduated All-American twin sisters Kindra and Maddi Hackbarth. Where some people might see a worrisome void, Ford sees opportunity. In her eyes, change isn’t always a bad thing.

“As much as we will miss them, we have a really good program,” Ford said on Tuesday. “They were a big part in helping build our brand and really helped develop some players through the years who you will see step up. (We will miss) their leadership and the (commitment) they brought day in and day out, but this year we will look different, and that’s not a bad thing. I’m actually kind of excited about it.”

Junior outfielder Jazmine Hill, who has contributed significantly in her first two years, is expected to shift over from right field to center to anchor the outfield. Hill finished second on the team in hits (52), first in doubles (14) and second in RBI (40).

A graduate transfer Jessica Puk will anchor the battery behind the plate and provide leadership. After a four-year career at Ole Miss, Puk committed to ASU less than a month after the Sun Devils’ season ended.

“I’m incredibly lucky to be here and finish my career at a place like ASU,” Puk said. “I’m surrounded by great people and a great atmosphere and it’s fun to be able to come to practice every day with this group. I’m excited for one last dance to see what we can do.”

From 2019 to 2021, Puk started every game for the Rebels and posted a .259 career batting average. On media day, Ford said the transition from the SEC to the Pac-12 has been an easy one for Puk, whom she described as “a phenomenal human being” who has slid into the program seamlessly.

“The team loves her and she just enjoys living life,” Ford said. “She has a great head on her shoulders. All of the characteristics she has make her a great catcher. She’s able to manage different personalities, doesn’t take things too (personally) and knows when to get on pitchers and displace their thought processes.”

Ford added, “I wish that we would’ve had her for four years instead of just one.” 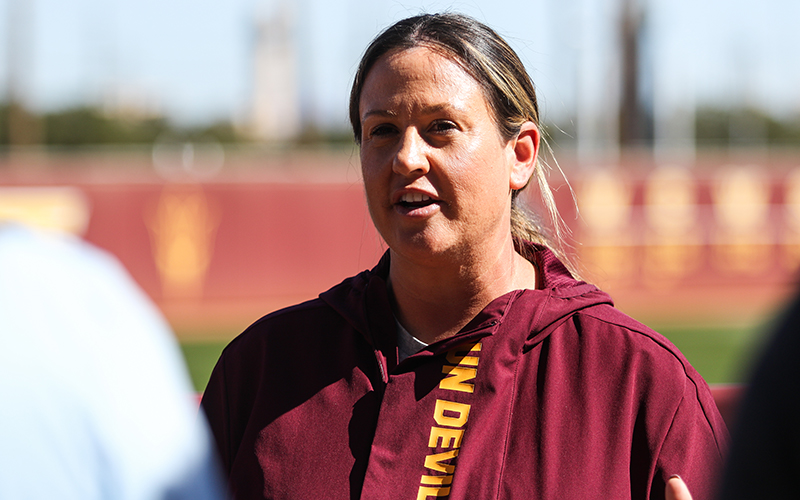 Two weeks after Ford announced the addition of Puk, she followed up with another graduate transfer from the SEC, senior infielder Jazmyn Rollin, who spent her first three seasons playing for Missouri. Capable of playing multiple infield positions, Rollin brings a big bat and plenty of defensive experience to the Sun Devil lineup.

Rollin started all 26 games in 2020 before COVID-19 shut down the schedule, posting a .364 batting average with a team-high seven home runs. In ASU’s fall game against GCU, Rollin, a lefthander, hit two towering moonshots over the right field wall to reinforce ASU’s standing as “Home Run U.”

“I think she brings us some great dynamics in the box,” Ford said. “She can hit the ball. We brought her here for that reason. That’s what we do here; we hit the ball hard.”

The Sun Devils also have a small, but distinguished class of freshmen who are eager to contribute immediately.

Headlining the group is the 2019 Missouri Gatorade Softball Player of the Year Mac Morgan. Morgan, who is five-foot-eight, delivers pitches that regularly clock over 70 mph on the radar gun, which is equivalent to a 98-mph baseball pitch.

Ford is eager to see what Morgan is made of and how competitive she can be at the collegiate level. Look for her to test Morgan early. Twice in the past three years, Ford has thrown a freshman pitcher into a starting role against a Top 10 team to see what they’re capable of and to prepare them for the rigors of the Pac-12 conference, which boasts five teams ranked in the D1softball.com Top 25 preseason poll. Ford could start Morgan against No. 5 Oklahoma State on Thursday and/or No. 20 Duke on Saturday in the four-day Kajikawa Classic at Alberta B. Farrington Stadium. 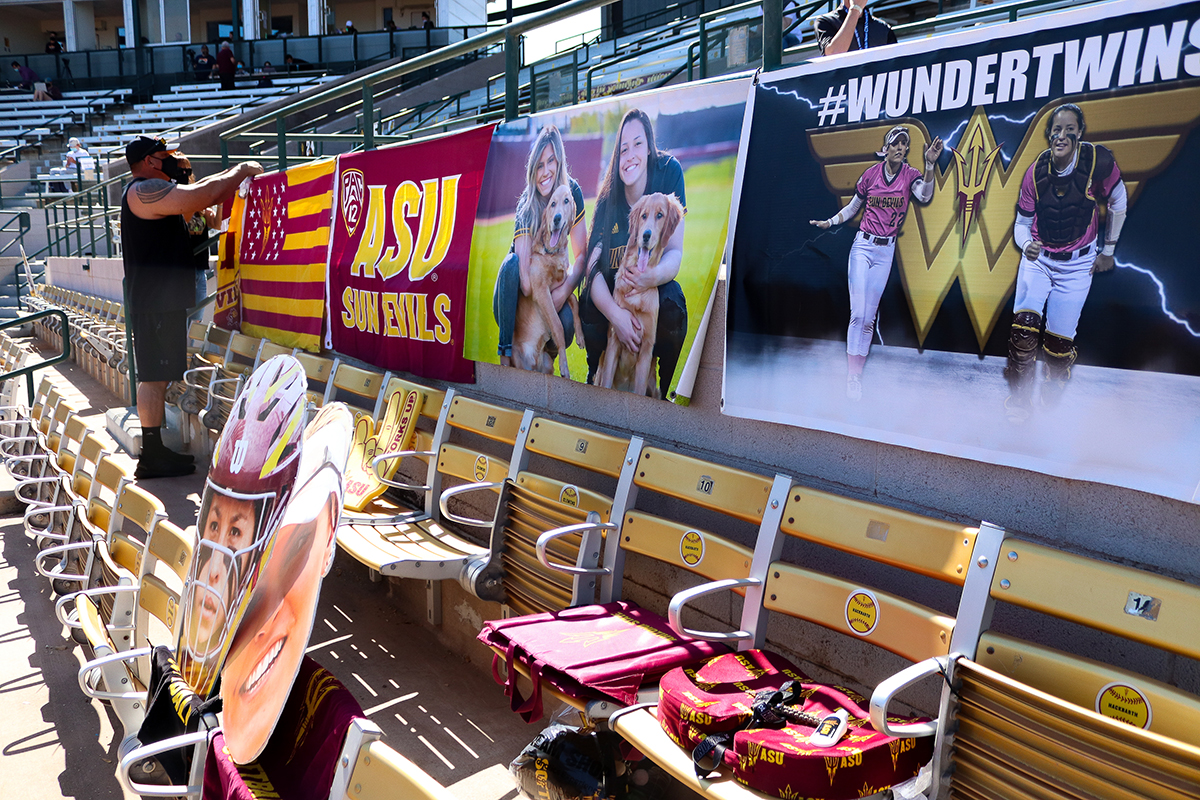 “She will be baptized by fire,” Ford said, chuckling. “She loves softball, and I mean, she loves it from the core of her body. You will see when she gets out in the circle. She’s fierce, she’s not nice, she wants to win. She is a competitor. Off of the field, she’s happy-go-lucky. It’s neat to see her go back and forth.”

Another highly-touted freshman is the catcher Liliana Thomas, the 2020 Hawaii Gatorade Softball Player of the Year. A former member of the club softball powerhouse the Firecrackers, Thomas honed her skills playing against premier talent along the West Coast. During her summer season, she hit six home runs and collected 22 RBI. She will back up and serve as an apprentice under Puk and senior Mailey McLemore.

Rounding out Ford’s freshman class is infielder Cydney Sanders from San Marcos, Calif., who will be competing for time at first base with junior Jordyn Van Hook and sophomore Christiana Watson. Ranked No. 9 in Extra Innings Softball’s Elite 100 Players, Sanders had a standout high school career. As a 15-year-old freshman, she hit for a .556 batting average in 30 games while showcasing impressive power. She won California Freshman of the Year honors and led her team to the CIF state championship. She went on to earn state first-team honors during the rest of her high school years.

This season is the first in which every player on the roster was recruited by Ford, who is in her sixth year at the program’s helm. Since she was hired in the summer of 2015, Ford has shaped and molded her Sun Devils teams to her ideals. The 2022 team, she said, reflects her vision of excellence and how she wants the program represented on and off the field.

“Every year that I’m here, it feels more and more like my program,” said Ford, who added, “It’s taken some time, but we have been very competitive. I think with this year’s freshman class and the incoming transfers combined with our returners, you’re going to be seeing some very special things out here at Farrington Stadium. I’m pretty excited about it.”