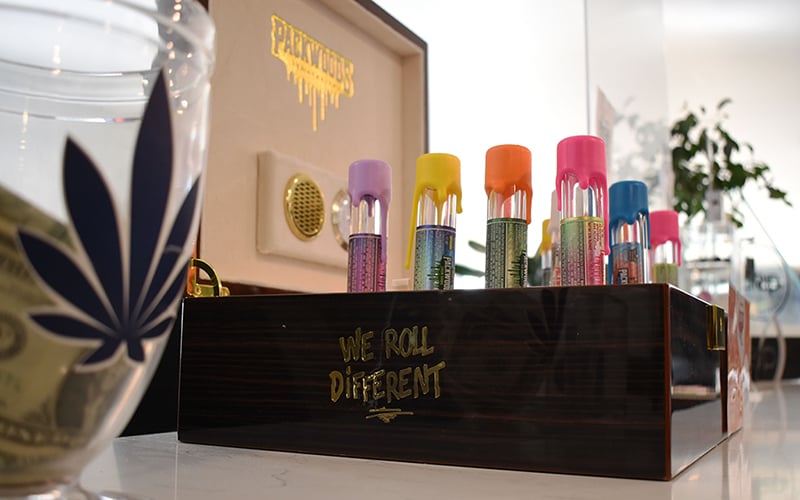 Prerolls and a tip jar sit on the counter at Sol Flower in Tempe. Customers place orders on digital touchscreens, then pick them up when they pay. (Photo by Hope O’Brien/Cronkite News) 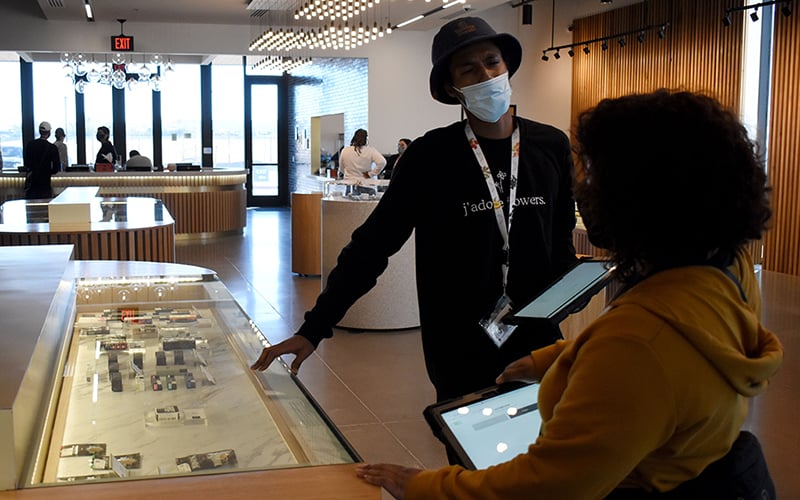 Deontay Ware, left, and Jai Washington prepare to open for the day at Sunday Goods in Tempe. Ware and Washington are “budtenders,” who help customers place orders. (Photo by Hope O’Brien/Cronkite News)

TEMPE – Walking into a marijuana dispensary today, it’s hard to tell that it’s only been a year since the use of recreational marijuana was legalized in Arizona. Dispensaries that already were selling medical marijuana, which began in 2012, had to scramble to transition their stores to sell to both recreational and medical customers.

Sol Flower, which has five dispensaries in metro Phoenix, was prepared for the grand shift, according to Allie Marconi, senior director of marketing for parent company Copperstate Farms.

“We were prepared from the get-go and were one of the first few dispensaries to start seeing recreational shoppers,” Marconi said. “We spent the majority of last January preparing a lot of our assets and marketing communications to accommodate this shift.”

The Arizona Department of Revenue reported that more than $196 million was collected in taxes from combined marijuana sales in 2021 – not including final December figures – with 22% of that total coming from recreational adult use. The department also estimated $528 million in taxable recreational sales.

In addition to feeding dollars to the state, the cannabis industry employs 25,000 people and is growing quickly, according to the Arizona Dispensaries Association.

Matt Pinchera, president of the Arizona cannabis company Hana, said the company’s two dispensaries have seen many customers new to marijuana over the past year. He noticed that recreational customers gravitate to products that are more discreet and convenient, such as edibles or vape cartridges, than marijuana flower buds.

According to the Arizona Marijuana Tax Handbook, medical marijuana patients are required to pay a 5.6% sales tax, whereas recreational users pay that 5.6% sales tax and an additional 16% excise tax. The excise tax revenue is shared by community colleges, public safety, public health programs and infrastructure. 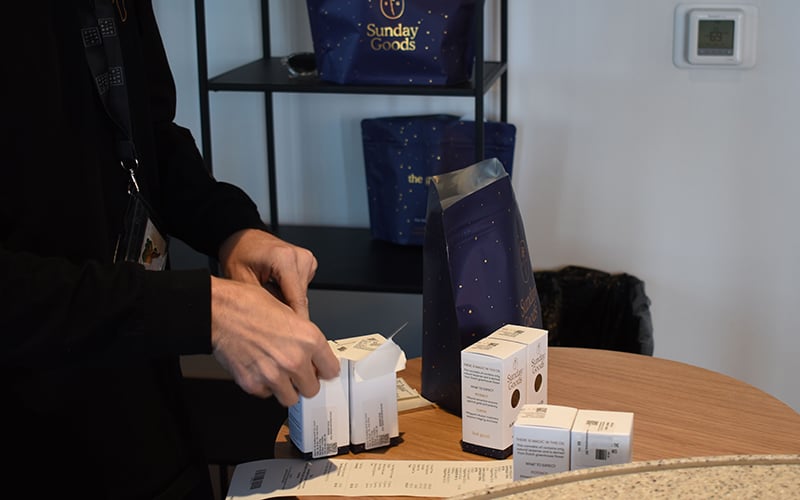 Zack Hendrickson at Sunday Goods in Tempe went from managing car washes to working in the marijuana industry after voters passed Proposition 207 in November 2020. (Photo by Hope O’Brien/Cronkite News)

John Haugh, the CEO of Sunday Goods, which has multiple dispensaries in the Phoenix area, has noticed that medical marijuana customers spend more money than recreational users, which tracks with the statewide trend.

The Department of Revenue estimated medical sales totaled more than $700 million in 2021, compared to more than $500 million in recreational sales. About 300,000 Arizonans hold medical marijuana cards, according to the Marijuana Policy Project.

Sam Richard, executive director of the Arizona Dispensaries Association, said state officials overall are permissive and flexible when it comes to regulations on marijuana, acting more as a partner in compliance rather than an enforcement agency.

“That subtle mind shift is really helping in a moment where we’re all kind of figuring everything out together,” Richard said, adding that although cannabis remains illegal at the federal level, several protections are in place to protect licensed operators working in a regulated ecosystem.

The association focuses on advancing legislation and regulation of the marijuana industry to protect and expose people to marijuana, or as Richard puts it, “introduce people to the Grand Cannabis State.”

But the group wants to see more trust and support from policymakers.

“The public trusts us to a large extent,” Richard said. “We have 25,000 employees that are actively working in the cannabis space right now in Arizona, and one of the fastest-growing industries.”

“We’ve really tried in our dispensaries to make you feel comfortable walking in and asking questions,” Haugh said. “And we want you to walk out with a smile and with confidence that you’re going to have the shopping experience you’re looking for.”