PHOENIX – Arizona’s dirt track racing scene has a legacy seven decades old. The first large race in the state was held in 1951, when Manzanita Park featured an event on a quarter-mile track. More than 3,900 fans watched Roe Mounts wheel his 1933 Ford coupe to victory.

This rich history is at the risk of making a dangerously long pit stop as dirt tracks that were once popular family gatherings as well as stepping stones to NASCAR success are struggling to survive.

“You drive by 35th Avenue and Broadway and see a parking lot and not somewhere where you spent your childhood,” Hobby Stock driver Steve Bitting said about Manzanita closing in 2009. “Some of those people only went to that racetrack, so you lose friends some friends and family members.”

Although it found its way to the Valley in the 1950s, the sport became popular three decades earlier when it became evident horse tracks could easily convert to auto racing. The surface is made of dirt or clay and often less than a mile long. Trucks to grade and smooth the track and water to create the right surface consistency are part of the prerace process.

In 1954, Manzanita Park added a half-mile track and opened the competition with a 25-hour marathon race. In 1965, the track changed its name to Manzanita Speedway. 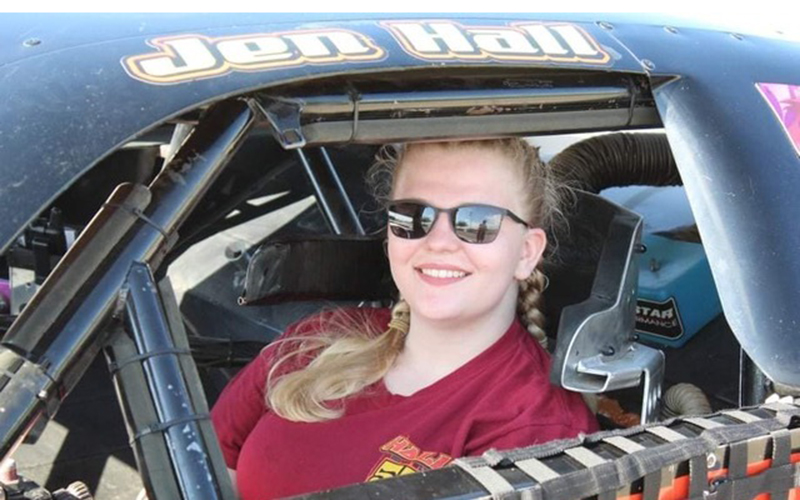 When Manzanita Speedway’s reputation blossomed, others saw a potential gold mine, building dirt tracks throughout the state. Once the tracks were finished, drivers across the country descended on the desert, hoping to prove they were the next dirt racing superstar.

As a kid, Bitting dreamed of becoming one of those drivers. He has been around the dirt track scene since he was a child and has seen some of the best NASCAR drivers live out their dreams.

“It’s weird because I watched Zach Madrid and Ricky Thornton Jr. grow up,” Bitting said. “I was racing when they were just little kids running around and playing with Matchbox cars in the dirt, and now they are some of the best in the country.”

When dirt track racing blew up in Arizona, the sport became more than a hobby. For some, it proved to be an affordable starting point for the journey to NASCAR.

“A lot of young drivers get into this with less out-of-pocket cash, so they use it as a stepping stone,” Canyon Speedway promoter Dave Craft said. “Tony Stewart and many others have come from the dirt scene.”

Alex Bowman is one of the few Arizona racers who started at local dirt tracks before jumping into NASCAR.

Yet, some local dirt track racers see the sport as more than a hobby for other reasons.

“It really kept me out of trouble,” Sport Mod driver Bryan Miller said. “I never got into drugs or any of that and dirt racing had a lot to do with that. It also drives me to do better because out on the track it is just you.” 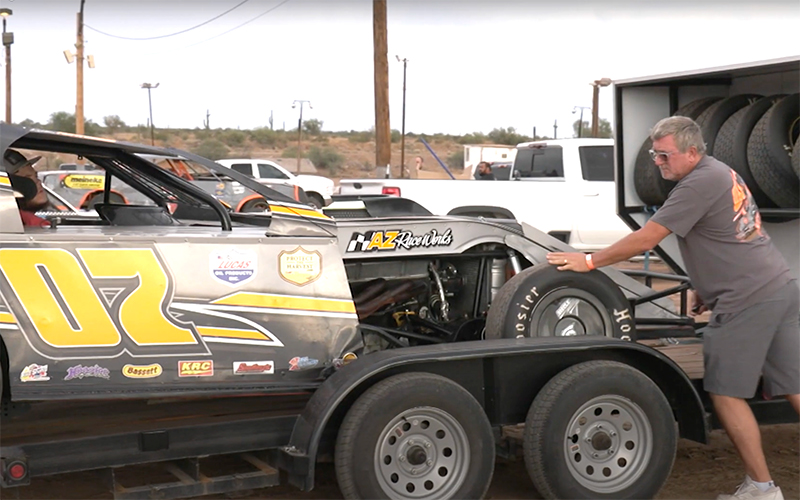 After a long day of work, drivers arrive at the dirt track to work on their cars and race. (Photo by Jack Johnson/Cronkite News)

Besides keeping racers on the straight-and-narrow, dirt track racing helped to build and bond families. When Craft was 20, he moved from the Midwest to Arizona to follow his racing dreams. Although his wife, Penny, never saw racing as a child, everything changed when she watched Craft at the track when they were in high school.

At that moment, the sweethearts began to intertwine their lives around the track. These days, Craft and his wife run a few tracks in the Midwest, as well as Canyon Speedway in Peoria. Although Penny never raced, she runs the media relations and social platforms at Canyon Speedway while Craft manages the track.

“It’s great to work with Penny but it’s a lot of stress,” Craft said. “She does a great job of handling all of my emotions.”

For other Arizona racers, their families were united on the dirt tracks in a variety of ways. After watching his uncle race on the East Coast, Bitting realized his lifestyle involved dirt tracks.

“It’s the only thing my kids and I have known,” he said. “Once I got old enough, I began racing back East. My kids have been at the track ever since they were infants.”

When Bitting leaves his daily job or the track, his racing life does not end. Instead, he puts in the extra work to perfect his craft.

“Once you are done at the race track, that is where the fun is,” Bitting said. “Work starts at home with racing. You are working on that car for three-to-four hours at night after an eight-hour shift at work.”

On the other hand, Miller’s family has been on the dirt since it first made its way in the desert.

“I have been around it since I was 2 years old because I’m a third-generation racer,” Miller said. “Once in a while, my grandpa and dad come to the race track.”

The track even helped Miller extend his family. Guy Norton, a local dirt track driver, was once Miller’s rival. After years of competition, Miller married Norton’s sister, bonding the two racers for life.

“It’s a really cool experience having your family there, even if you are competing against them,” Miller said. “To see the expressions of your family when you win or your family member wins, it’s an adrenaline rush that is hard to get rid of. Racing to me is like a drug, it is hard to give it up.”

At Canyon Speedway, the Crafts look to lure families from throughout the state through innovative, inclusive ways.

“We do the junior co-pilot program where kids get to take pictures with the drivers,” Craft said. “We also open our pits up after the races to the fans to come down and meet the drivers. It’s a fun family activity that is an alternative to some of the big leagues like the NFL and NBA where you can’t get close and personal with the athletes.”

Dirt track racing provided a childhood home, a unique lifestyle and a family member for several Arizona racers. However, dirt track racing in Arizona has taken huge hits throughout the state. 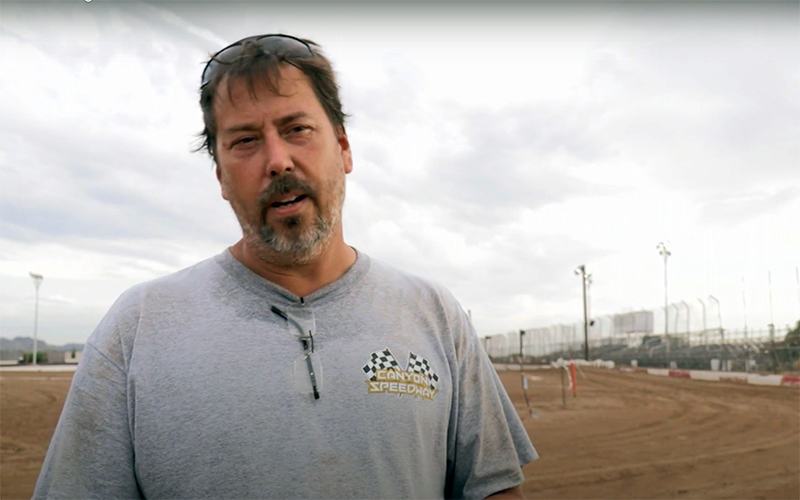 Until the 2000s, Manzanita Speedway was considered one of the top dirt tracks in the country. The track first boomed after World War II, when the automobile industry was at an all-time high. The track has hosted the 1992 Slick 50 Sprint Car World Series, NASCAR Winston West Series races and other national races.

However, Manzanita Speedway shocked the dirt track community, closing after its final race on April 11, 2009. Located in a growing neighborhood in suburban southwest Phoenix, the track due to poor attendance and dust and noise complaints.

When a restaurant or business shutters, it tends to affect the few who worked at that location. When Manzanita closed, many dirt track racers struggled to cope. For Miller, he felt like he lost more than a track that day.

For Bitting and others, Manzanita’s closure became an inconvenience,

“It was scary for all of us because we are down to two or three tracks that can run and we have to travel a few hours to get to some of them,” Bitting said.

Shortly after closing, Manzanita Speedway was sold to Southwest Rigging and converted to a parking lot and equipment storage spot. When the track closed, Arizona dirt track racers began to flock to Arizona Speedway. For over a decade, racers settled at the new track, not expecting it to disappear. However, Arizona Speedway began its downfall nearly 12 years after Manzanita closed.

Similar to Manzanita, Arizona Speedway was doomed by dust and noise complaints, and saw its last race on April 4, 2021. When the track closed, the dirt track atmosphere struggled once again.

“Arizona Speedway is one of the best-ran tracks I’ve been to, but it’s very sad to see it go because that track could have gone places if the county gave them time,” Bitting said.

After losing some of the best dirt tracks in the desert, dirt track fanatics saw parts of their lives disappear.

“You lose a little bit of your lifestyle because the younger generation are going to think everyone starts at the NASCAR or iRacing level,” he said. “It doesn’t start there, It usually starts at Go-Karts or dirt tracks. New drivers will now be recruited off their talent based on video games or some other venue.” 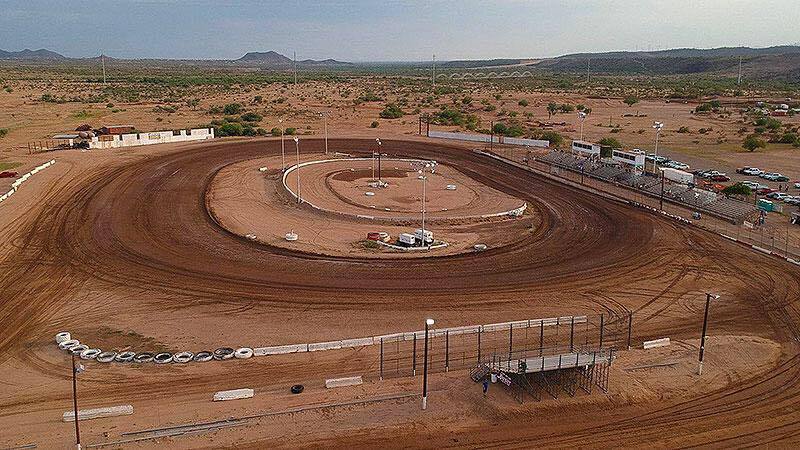 The surface of dirt tracks is made of dirt or clay, and the tracks are often less than a mile long. Trucks to grade and smooth the track and water to create the right surface consistency are part of the prerace process. (Photo courtesy of Canyon Speedway)

With few dirt tracks left in the desert, Arizona racers are hanging by a thread. Although their childhoods memories have faded, they are grateful for what the dirt tracks meant in their lives. On the positive side, the long-gone tracks helped Craft and his family learn how to become responsible individuals, he said.

“The dirt tracks made me learn a lot through multiple industries,” Craft said. “It has not only allowed me to learn things about myself, but it has made my boys self-sufficient as they have grown up.”

On the other hand, dirt tracks kept Miller on the right side of life.

“If I did not have dirt track racing to go to, I wouldn’t know what to do,” Miller said. “Dirt track racing helps keep people out of trouble. It keeps your mind moving forward to next week or next month, it leads to goals.”

Promoters and racers must adapt to the future of racing. Since dirt tracks are falling off, the grassroots level looks for the next stepping stone for future racers.

“It’s kind of natural evolution,” Craft said. “What we are seeing is people are supplementing it with other things. They supplement it with side-by-side riders, rock crawlers, or offroad, and four-wheel drive. They are putting their time into something that is fun to them and go blow off steam. I see people supplementing their time with those and water sports in the future.”

As tracks begin to close locally and nationally, hopes of dirt tracks surviving are dwindling. Craft said he is confident Canyon Speedway will remain open for the foreseeable future, but as the Valley continues to expand, he can see his track fall like the other major tracks in the desert.

“I do not see it closing in the immediate future because of the logistics of where it is at,” Craft said. “If you are asking me the question in 10 to 20 years, maybe. There can be noise restrictions but I would like to think that it will stay open.”

Bitting believes the fall of Manzanita and Arizona Speedway was just the beginning of the end.

“It’s all about money these days compared to just looking for talented drivers,” Bitting said. “Unless you bring money to the table, I don’t think anyone will make it to the top level anymore.” 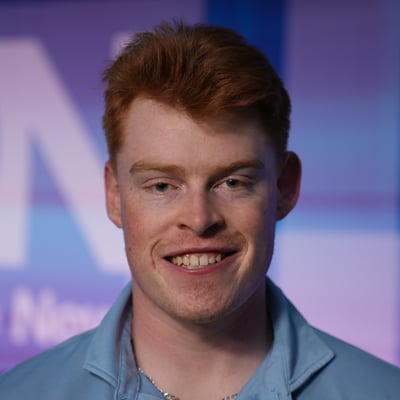