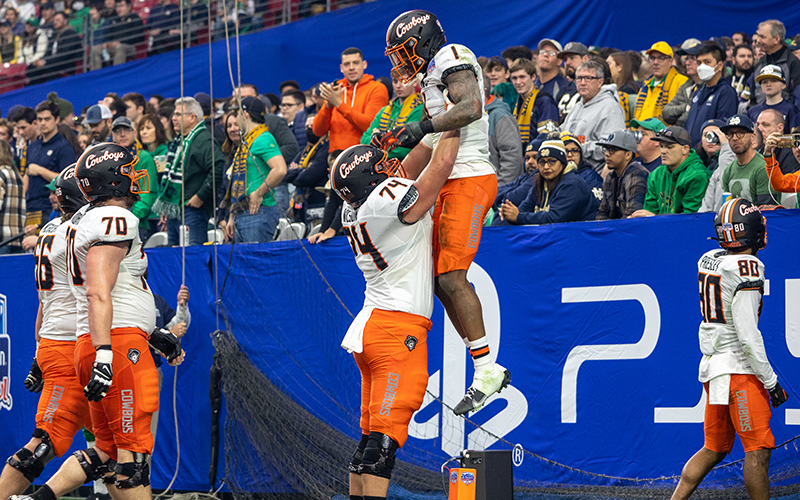 Oklahoma State wide receiver Tay Martin (right) is lifted off the ground by offensive lineman Preston Wilson after one of Martin’s three touchdown passes from Spencer Sanders in the Fiesta Bowl. Sanders had one of the best games of his career. (Photo by Mary Grace Grabill/Cronkite News) 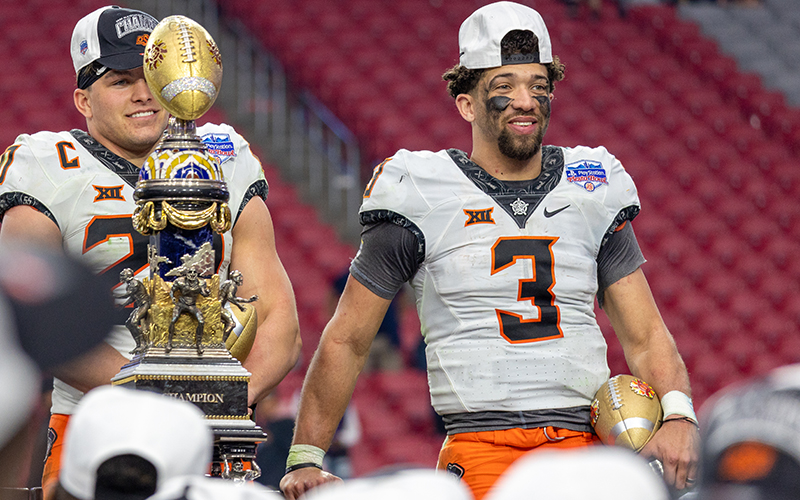 Sanders (right) and linebacker Malcolm Rodriquez were two of the most impactful players in Saturday’s victory for Oklahoma State. (Photo by Mary Grace Grabill/Cronkite News) 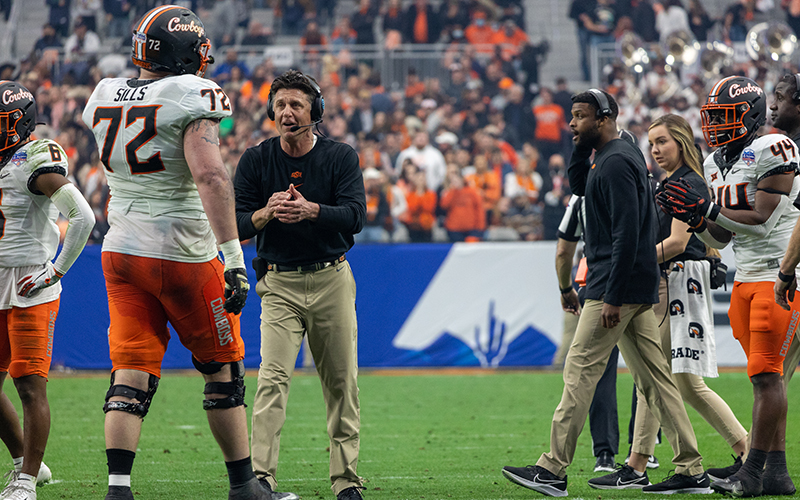 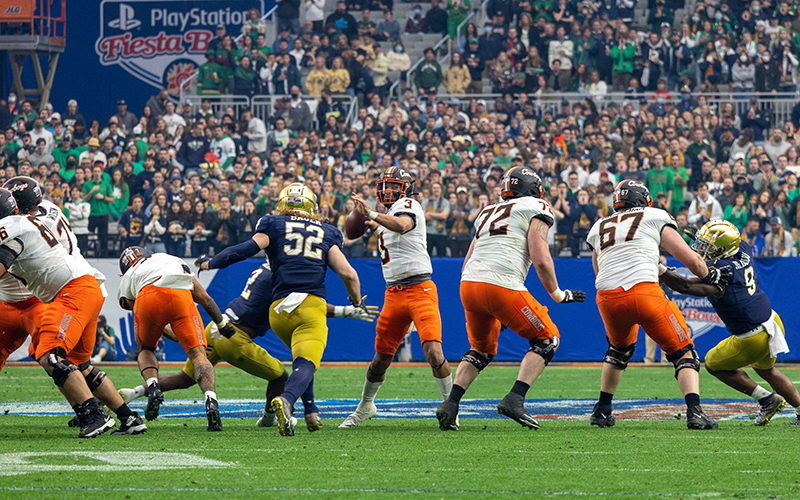 Sanders passed for 371 yards and four touchdowns, an effort that was well received because the performance was on a national stage. (Photo by Mary Grace Grabill/Cronkite News)

GLENDALE – A comeback led by junior quarterback Spencer Sanders, who threw for 371 yards and four touchdowns and ran for 125, powered Oklahoma State to a 37-35 victory over Notre Dame in the PlayStation Fiesta Bowl Saturday.

It was a performance that reflected the best season of his career, one assisted by a familiar name to Arizona: Tim Rattay.

Rattay, an eight-year NFL veteran who played at Desert Vista High School and Scottsdale Community College, is the first quarterbacks coach who has spent two seasons with Sanders during his time at Oklahoma State.

“I think, as you look at Spencer’s growth, you see a guy that’s just operating the system in basically autopilot now, so he understands how to go about moving the ball, distributing the ball,” said Kasey Dunn, Oklahoma State’s offensive coordinator.

Only once before has a Cowboys player passed for 300-plus yards and rushed for 100-plus yards in a game: Taylor Cornelius against West Virginia in 2018.

Although the Fighting Irish jumped out to a 14-0 lead, Sanders rallied the Cowboys, and three of his touchdown passes went to Tay Martin. 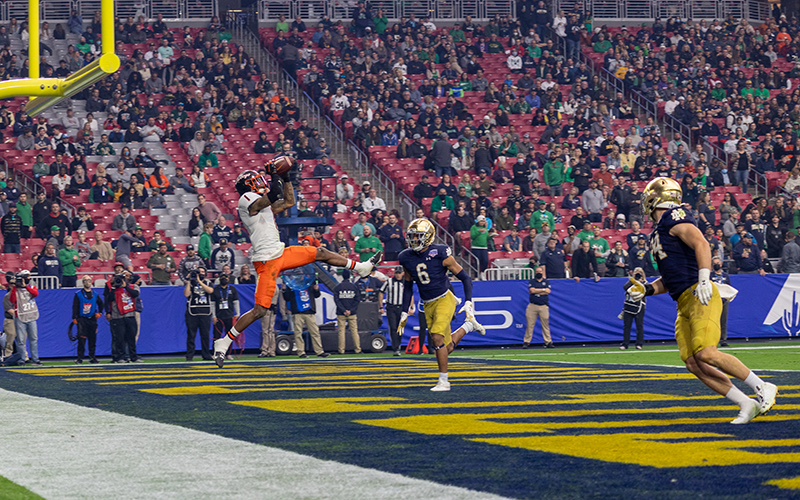 The Cowboys’ Martin made it difficult on Notre Dame with precise routes and on-target passes from Sanders. (Photo by Mary Grace Grabill/Cronkite News)

No one was happier than Rattay, whose NFL career included a stop with the Arizona Cardinals in 2007. He joined the Oklahoma State staff in 2020 after coaching stints in college and the NFL.

He has had a close-up look at Sanders’ growth.

“I think it’s just his leadership,” offensive lineman Josh Sills said about Sanders earlier in the week. “I mean, obviously you see everything that he does on the field. But I think the biggest thing is there’s a lot of people that don’t see the other side to it, of how long he spends in the film room or staying after practice or in the summer, in the fall. … I don’t think that it’s fully showcased of how valuable his leadership is of doing those things or going the extra mile to meet with coach Dunn or coach Rattay to make sure the game plan is down to a T.”

The Rattay name is a familiar one in Arizona, not only because of Tim but his dad, Jim, one of the most accomplished high school coaches in the state who had stops at Mesa, Desert Vista, Phoenix Christian and Laveen Cesar Chavez.

Plenty of Fiesta Bowl and school records were broken on both sides, included most combined thrown touchdowns in bowl history and the largest comeback win in Fiesta Bowl history.

A crowd of 49,550 attended the 51st edition of the game that turned into a shootout quickly. The Fighting Irish set the tone early and scored a touchdown on the first possession, going 75 yards on five plays. 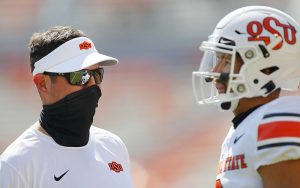 Quarterbacks coach Tim Rattay (let) has developed a strong connection with Sanders, who had a standout game at State Farm Stadium. (Photo by Brian Bahr/Getty Images)

Notre Dame had early control of the game, leading 28-7 late into the second quarter. Then Sanders went to work.

I’m excited for him and excited for the direction that he’s going and moving forward,” Dunn said.

Sanders was aided by a strong performance from Martin, who bounced back from two drops and posted 104 yards and three touchdown.

It is easy to solely focus on what the Cowboys and Sanders did but credit, too, Notre Dame graduate quarterback Jack Coan. Coan set several Fiesta Bowl records by completing 38 of 68 passes for 509 yards and five touchdowns.

He was one of several players that stepped up and rallied for their new coach, Marcus Freeman.

It may not have been the result he wanted in his first game as coach and fourth time in the Fiesta Bowl – he attended three as an Ohio State player – but he looks forward to his future with the program.

“We’re obviously disappointed,” he said. “I thought the kids prepared tremendously. I thought the coaching staff did a great job, but at the end of the day, we didn’t execute when it mattered most.

“But these guys, man, this is a special group. And for those that aren’t coming back, they’re going to be greatly missed. More than anything, I think there’s a group that’s, one, disappointed, but, two, motivated, motivated to right what happened today and to start the progression for the future.”

The Cowboys are excited, too, about their future and made it clear Saturday that Arizona State will have its hands full when it visits Stillwater on September 10. 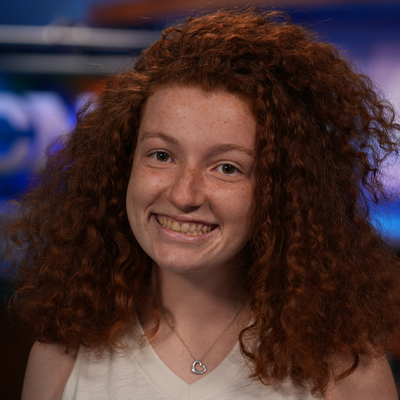 Mary Grace Grabill expects to graduate in May 2023 with a bachelor’s degree in journalism and a minor in film production. Grabill, who has interned as a photographer for Phoenix Magazine, is working in the Phoenix Sports Bureau.