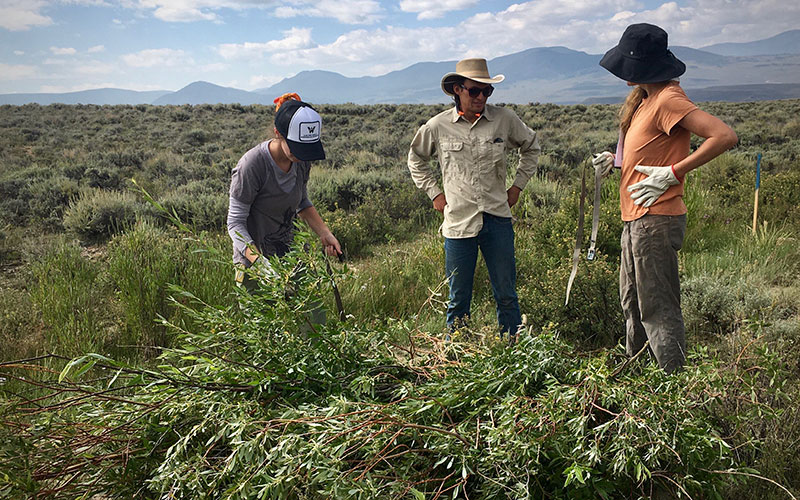 On a warm morning, a group of volunteers gathers in the high desert about 20 miles outside Gunnison, Colorado. Armed with willow branches and stones, they’re ready to help restore a critical wildlife habitat.

Volunteers are here to restore a wet meadow, a type of shallow marsh that can form in an arid sagebrush landscape.

“I always joke around that I should’ve majored in basket weaving instead of wildlife management because that’s definitely a skill we’re going to be using today,” said Nathan Seward, a conservation biologist with Colorado Parks and Wildlife.

Payten Maness and other volunteers will weave willow branches into protective barriers and build dams with sagebrush and stones collected nearby to slow and spread the water flowing in Munson Creek.

“I think it’s really cool how we are doing it here,” Maness said. “It’s super low-tech, which means that basically anyone can come in and do it. You don’t need a lot of training.”

Max Sawyer is a master’s student in Environmental Management at Western Colorado University who’s working on wet meadow and riparian habitat restoration in the Gunnison Basin as part of his coursework. He said a narrow stream creates a very small strip of riparian habitat going through a valley bottom.

In sagebrush country, wet meadows and riparian areas account for only about 2% of the landscape. Trouble for these ecosystems started when white settlers moved West. Instead of taking their wagons through the sagebrush where it was rocky and rough, they followed the edges of the meadows.

Seward said the wagon wheels created trenches that were reinforced by livestock moving between water sources, and eventually off-road vehicles using the same paths. These trenches caused water to pool.

“When water gets captured in those trails it speeds up and becomes more erosive and it starts to downcut,” he said. “It starts actually washing away the topsoil and working its way until it finally hits the bedrock.” 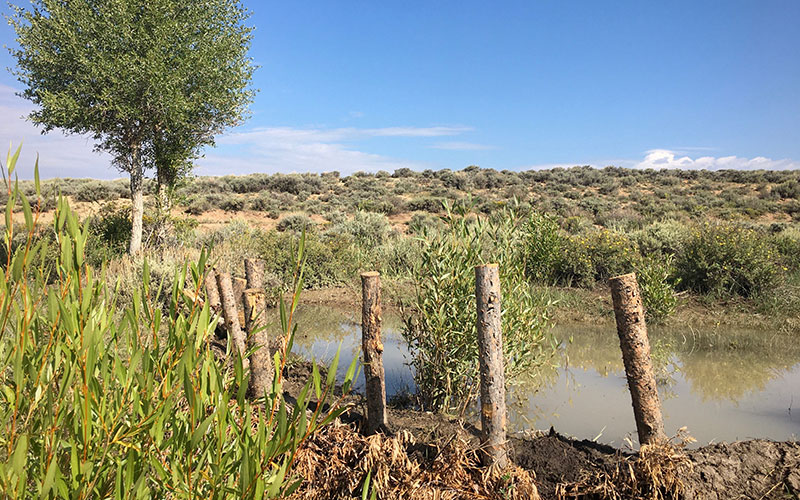 Wet meadows and riparian areas in sagebrush country account for only about 2% of the landscape, but they provide critical wildlife habitat and act as natural sponges, holding water during times of drought. Harm to wet meadows started in the early days of white settlement in the area, and climate change threatens to worsen it. (Photo by Laura Palmisano/KVNF)

Sawyer said these impacts are being sped up by climate change.

“We are trying to prevent these systems from disappearing entirely from our landscape,” he said.

Colorado Parks and Wildlife estimates about 3,500 Gunnison sage grouse survive, with a majority of the birds living in the Gunnison Basin. In 2015, there were about 5,000.

The Wet Meadows Restoration Resilience Building Project is a local effort to restore habitat for the threatened grouse. It’s a collaboration by government agencies, nonprofits, private landowners and the public.

Wet meadows also act as natural sponges, holding water in the soil and slowly releasing it over time. Seward said the restoration work helps build resiliency into the ecosystem. That will only get more important as climate projections indicate the area will get warmer and drier.

“Everyone knows that water in the West is life,” he said. “All life needs water, so by holding more water here in the Gunnison Basin longer and putting it to good beneficial use for wildlife, for our agricultural industries, like ranching as well – really everyone benefits from this kind of work.”

Project organizers said their efforts are paying off in the Gunnison Basin. Overall, they’ve seen wetland vegetation double in treated areas since the program started in 2012.

This story is part of ongoing coverage of the Colorado River, produced by KVNF, distributed by KUNC and supported by the Walton Family Foundation.