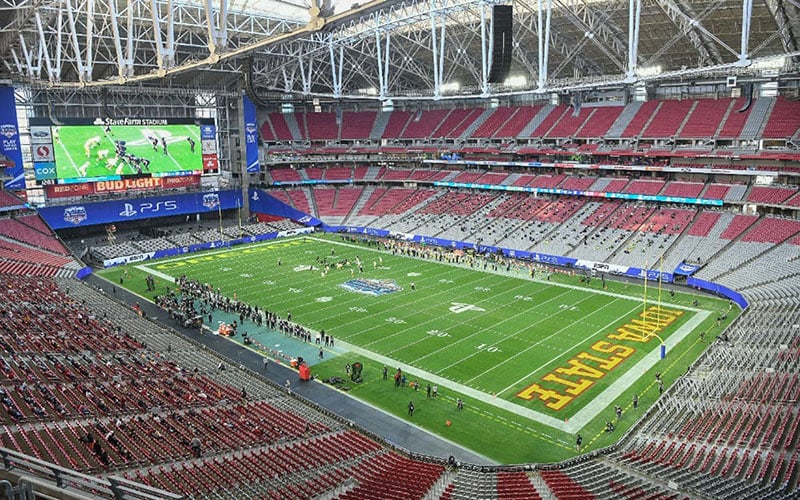 Iowa State and Oregon squared off in a largely empty stadium for the 2020 Fiesta Bowl because of COVID-19 protocols, but organizers of all three Arizona bowl games are looking forward to a return of normal crowds this year. (Photo courtesy of the Fiesta Bowl) 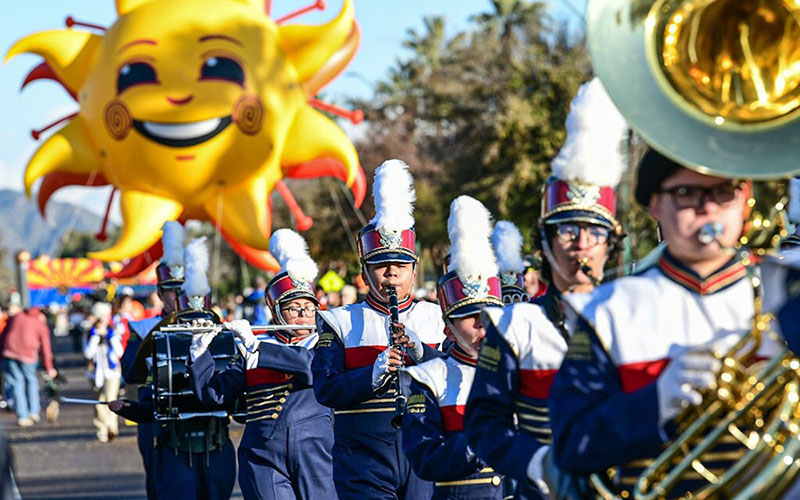 The Fiesta Bowl Parade in Phoenix, shown in a file photo, was held Dec. 18 in Phoenix, kicking off bowl season for Arizona’s three football games: the PlayStation Fiesta Bowl, the Barstool Sports Arizona Bowl and the Guaranteed Rate Bowl. (Photo courtesy of the Fiesta Bowl) 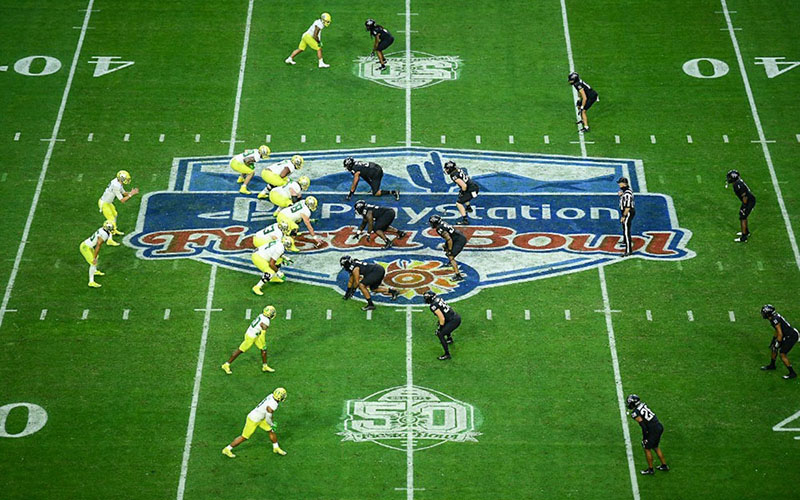 Iowa State, in black, beat Oregon 34-17 in last year’s Fiesta Bowl, which was not attended by fans because of the pandemic. Organizers expect big crowds for this year’s game between No. 5 Notre Dame and No. 9 Oklahoma State. (Photo courtesy of the Fiesta Bowl)

With COVID-19 protocols in 2020 prohibiting fans at the Fiesta and Arizona bowls, and a lack of eligible teams forcing a last-minute cancellation of the Guaranteed Rate Bowl, organizers are eager to welcome fans and teams this year.

“On Selection Sunday, we hope there’s a light blizzard in the Midwest, on the East Coast, and all those people decide that they want to come out to Arizona to see their team play and then spend some time in the sun,” said Patrick Barkley, chairman of the Fiesta Bowl’s board of directors.

The bowls are already off to a better start than last year, with teams lined up for all three games: The Guaranteed Rate Bowl landed Minnesota and West Virginia for its Dec. 28 game, Central Michigan faces Boise State in the Barstool Sports Arizona Bowl on Dec. 31 and No. 5 Notre Dame will play No. 9 Oklahoma State on Jan. 1 in the PlayStation Fiesta Bowl.

The selection of teams is about the only aspect of the game that organizers don’t handle. The PlayStation Fiesta Bowl is one of a “New Year’s Six” series of bowls that rotate as part of the College Football Playoff national championship event. The CFP selection committee picks the participants.

The Big 10 and Big 12 conferences picked teams, based on where they finished in conference standings, for the Guaranteed Rate Bowl, the same process the Mountain West and Mid-American conferences use to pick teams for the Barstool Sports Arizona Bowl.

Organizers of the three college bowl games in Arizona – the Playstation Fiesta Bowl, the Barstool Sports Arizona Bowl and the Guaranteed Rate Bowl – are looking forward to the return of fans after last year’s pandemic restrictions. (Photo courtesy of the Fiesta Bowl)

But for large-scale events like bowl games – where matchups may not set until as late as 12 days before – planning is year-round. For the Fiesta Bowl organization, it is not just planning for one game, either: It runs the Fiesta Bowl game, the Guaranteed Rate Bowl and a parade on Central Avenue in downtown Phoenix, all in a 14-day span.

This can present challenges for bowl organizers.

“I won’t say it creates any angst, but it certainly creates some unknown issues,” said Bob Whitehouse, COO of the Fiesta Bowl organization. “Whereas, if you were picking the teams, maybe you’d have a little better idea of, ‘OK, we’re going to focus on these four teams.’”

Whitehouse and a team of about 30 work through the year on the logistics of the events, which will have “at least 500 (workers) per game at a minimum” on game day.

Their biggest challenge is converting Chase Field into a football stadium for the Guaranteed Rate Bowl. That process does not start until 10 days before the game – which, this year, was the same day as the Fiesta Bowl parade, Dec. 18.

“We’re going to get done marching down Central Avenue, we’re going to send people over to Chase (Field) and we’re going to flip from the parade to start loading things in and helping turn that stadium into a football stadium,” Whitehouse said before Saturday’s parade.

This is the 10th year there’s been bowl game action in the D-Backs’ digs. Whitehouse said the bowl tries to capitalize on the intrigue of football in a nontraditional venue.

“If there are football fans, whether you’re an ASU fan … or a Cardinal fan, you can come see two great matchups,” he said.

The Guaranteed Rate Bowl is one of four postseason games set in Major League Baseball stadiums this year, and has been at its current home the longest of those four.

A time-lapse video of the baseball diamond at Chase Field being converted to a football field for a previous edition of college bowl football in Arizona. (Video courtesy of the Fiesta Bowl/Cronkite News)

Chase Field’s nearly 49,000 seats allow for more ticket sales. While organizers try to woo local fans who might not have a particular rooting interest in either team, they work to drum up interest with participating schools who will “start selling to their local fan base and their alumni groups” as soon as teams are announced.

While Whitehouse and the Fiesta Bowl staff are working in the Valley, organizations around Tucson are working ahead of the Arizona Bowl at the Arizona Stadium in Tucson.

Michael Guymon, interim president and CEO for the Tucson Metro Chamber of Commerce, said feedback from member businesses has been “absolutely positive” since the first Arizona Bowl in 2015.

He acknowledged some negative feedback after Barstool Sports was named as a sponsor of the bowl this year, over a history of controversial statements by its founder. But none of that feedback has come from chamber members, Guymon said.

This year’s Arizona Bowl will be the fifth meeting ever between the Central Michigan Chippewas and the Boise State Broncos.

“We are honored to be chosen for a great bowl game against a top-tier opponent in Boise State,” Central Michigan coach Jim McElwain said in a release. “I have heard great things about the bowl and know it will be a first-class experience for our kids and program.”

The West Virginia Mountaineers and Minnesota Golden Gophers will meet for the first time on Dec. 28, though both have played before in the Guaranteed Rate Bowl, where the Gophers are 0-3 and the Mountaineers 1-1.

Does partnership between Barstool Sports, Arizona Bowl suggest an attempt at image change?

“Our team is excited to head to Phoenix, which is one of the most beautiful places in the country, and we look forward to facing a very talented West Virginia team,” Minnesota coach P.J. Fleck said in a release. “They are extremely well-coached, and this game will be a terrific challenge for us. … We look forward to representing the state of Minnesota on Dec. 28 in sunny Phoenix.”

Barkley said bowl organizers have tried to make a name for themselves by “really focusing on hospitality.”

“We’re the most hospitable in the country, and make sure that our guests and the people that travel here, have an amazing experience and make sure they know that they’re appreciated, and that hopefully, they walk away with a great experience,” he said.,

That was echoed by Whitehouse.

“We want them to walk away going, ‘Gosh, that was great value. I want to come back next year,’” Whitehouse said. Above anything else, he added, it “always helps to have a great game.”

He recalled “some classics” in the past: 50,000-seat sellouts on Christmas Days in the 1980s, Ohio State holding off Miami in double-overtime for the national championship in 2003 and Boise State’s “Statue of Liberty” play to win in overtime against Oklahoma in 2007.

This year’s Fiesta Bowl will be the first meeting between Notre Dame and Oklahoma State, but not their first trips to the bowl. The Fighting Irish make their sixth Fiesta Bowl appearance, where they last fell to Ohio State 44-28 in 2016, and the Cowboys are back for the first time since beating Stanford 41-38 in 2012.

Both teams were 11-1 in the regular season, with the Cowboys finishing the year 11-2 after losing the Big 12 championship game. Notre Dame’s only loss was to Cincinnati, which finished the year at 13-0 making the CFP.

Mike Nealy, executive director of the Fiesta Bowl, said in a statement that the first-ever meeting of the two teams should make for “another memorable Bowl Season moment. These two programs are at the elite level, with passionate fan bases and rich histories.”

And this year, there will be fans in the stands.