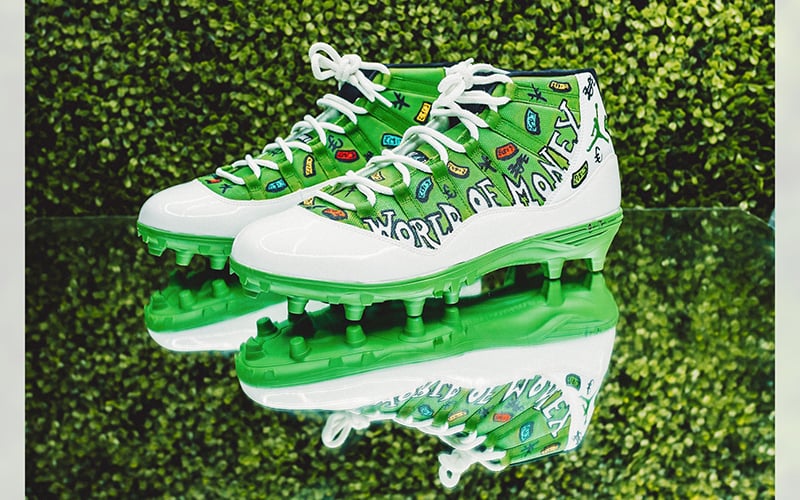 PHOENIX – For the sixth consecutive season, NFL players, including 16 Arizona Cardinals, are showing off custom-designed cleats to support charitable organizations as part of My Cause My Cleats.

The initiative allows players to support charities close to their hearts in a league that otherwise prioritizes consistent uniforms.

Arizona Cardinals players will show off their designs on Monday night against the Los Angeles Rams at State Farm Stadium. Some will support medical research organizations. Others feature social justice and equity groups. But some players chose smaller organizations that target specific issues that hit close to home.

Take Byron Murphy. The Arizona native’s cleats support the National MPS Society, an organization that strives to cure, support and advocate for MPS and ML (mucopolysaccharidoses and mucolipidosis). His cousins, Kianna and Justin White, have Morquio syndrome, a condition that affects the bones, joints and internal organs because of missing enzymes.

Morquio syndrome is incredibly rare. It’s even more rare for both siblings to have it, said Leslie Urdaneta, the society’s director of family support and communication. 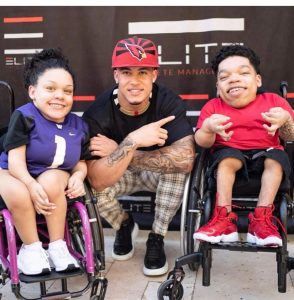 Kianna and Justin White, Byron Murphy’s cousins, have a rare disease, but that hasn’t stopped them from attending Murphy’s games. (Photo courtesy of National MPS Society)

Murphy has “done some really great things for the society in the past” to honor his cousins, Urdaneta said. On the flip side, the society has sponsored the Whites to travel to watch Murphy at games, most recently during his college career at the University of Washington. His cousins are Murphy’s biggest fans.

Though Murphy has supported the society for years, his decision to design cleats to wear during an NFL game is a significant moment.

Urdaneta said the opportunity to have her organization featured in such a high profile league is “incredible for us, a tiny nonprofit that serves the whole country for rare, rare diseases.”

“To have national recognition is something that so many of our families hope for, and say, ‘I wish that people just knew what this was,’” Urdaneta said. “Just having more people, having more eyes on this being something that exists is always helpful. The more that people can be informed, it just makes a tremendous difference.”

The bio section of Devon Kennard’s Instagram and Twitter describes the Cardinals linebacker as a “real estate investor, speaker and philanthropist.” He could also add teacher to that list.

Kennard serves on the advisory board for World of Money, an organization based in New York City that teaches financial literacy. There, he teaches real estate investing to the students. And Sabrina Lamb, the founder and executive director of World of Money, said the kids don’t even care that Kennard plays football. “They want to know how they could own real estate and how to think about it,” she said.

This year, Kennard is highlighting the organization on his cleats.

His decision to honor World of Money this season means visibility for the growing organization.

“As I’ve talked to professional athletes over the years, many struggle with this very issue: financial education,” Lamb said. “And so we want – Devon, and I, and my team – we want to support children, but also ignite in professional athletes the spirit of giving, philanthropy, through empowerment, through giving children the tools that they need to fly in their lives, to soar in their lives. And then also to encourage other athletes to apply the information themselves, that they themselves can live a financially secure life because many, unfortunately, don’t.”

Lamb is also hoping that her organization’s relationship with Kennard will allow them to expand their classes into the Southwest.

“America’s number 17 in the world when it comes to youth financial education,” Lamb said. “Together with Devon, and hopefully the Arizona Cardinals or the Arizona community, we want to provide this empowering information and experience for the children of Arizona, led by Devon Kennard.” 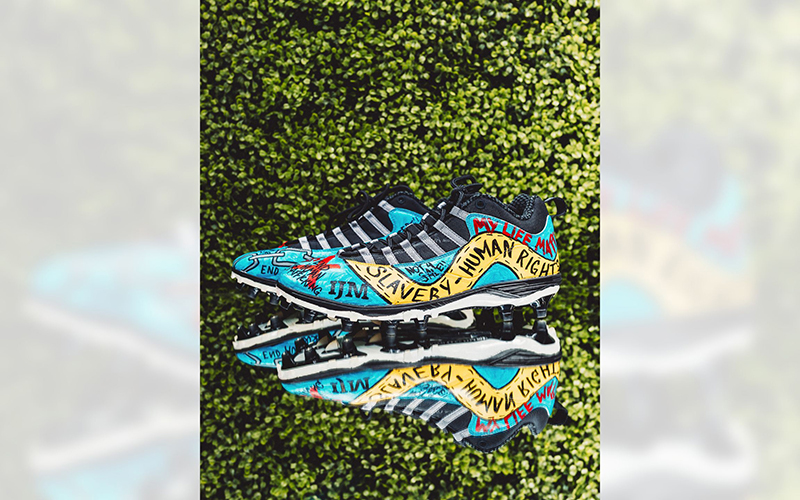 Jordan Hicks is one of many professional athletes that support the International Justice Mission, an organization that strives to end trafficking and slavery. (Photo courtesy of Derrick Spencer, Arizona Cardinals)

Fighting for survivors of trafficking

Cardinals teammates Max Garcia and Jordan Hicks are two of the many professional athletes that support the International Justice Mission, an organization that combats trafficking and slavery, violence against women and children, and police abuse of power.

The athletes work with Team Freedom, a segment of the organization that is partly led by Nick Hundley, a former professional baseball player who learned of the mission early in his baseball career.

“For guys to go out there and put our name on their cleats and to put their name and their power and their voice beyond our mission, that’s really special. We’re so very thankful for that,” Hundley said. “And then fans of teams see (the players’ causes). Word gets spread, more people get saved. More people are rescued out of terrible situations that are their nightmare.”

Garcia has traveled with the mission to its field office in the Dominican Republic, which is valuable for the organization, given Garcia speaks Spanish.

“He was able to participate in some government advocacy, and he was able to deliver a message on behalf of IJM in Spanish. Max has gone really deep with us and been able to go to the field to see the actual work firsthand,” said Maggie Cutrell, the media director at the mission. “It’s hard to describe the casework type. And when you see it firsthand, it really just takes on a different kind of perspective.”

Cutrell also remembered a moment that impacted the mission when Hicks was with the Philadelphia Eagles in 2018 when the team made its Super Bowl run.

“Once that final playoff game ended, Jordan and five or six other Eagles players looked at each other and texted one of our teammates at IJM and said, ‘How do we use this moment for IJM?’ It gives me chills even telling this right now,” Cutrell said. “This core group of Eagles players were like, we want to do everything with this amazing platform that we have. And so from that moment, they really did use the power in the locker room to bring other guys in, financially and (through) the power of social media.”

Hundley reiterated the importance of initiatives like My Cause My Cleats in starting conversations among teammates and between players and fans.

“What do you put on your cleats? Why are you so passionate about this work? Everybody’s gonna have different passions and different callings in their lives. But to be able to facilitate that conversation in the locker room – that’s amazing,” Hundley said. “And that’s something that I asked probably far too late in my career. Why doesn’t baseball have cleats for a cause? Why isn’t that implemented in different areas? That should be in baseball as well.”