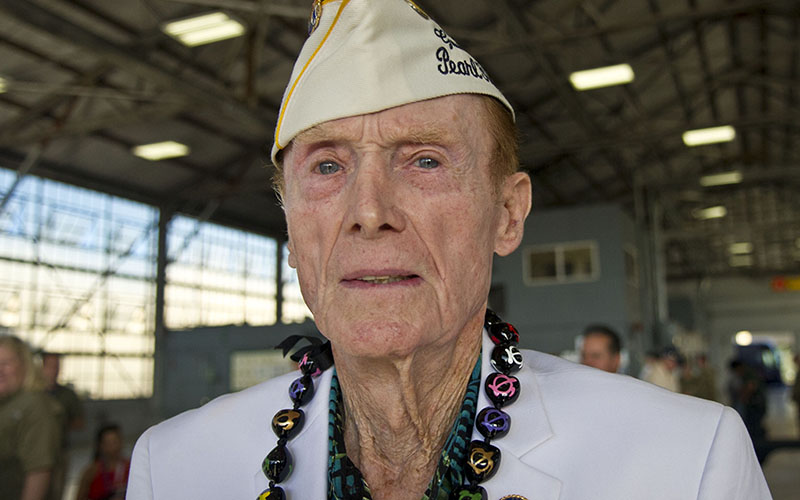 Jack Holder of Chandler is one of fewer than 75 Pearl Harbor survivors who are still alive. “When the first bomb fell at Pearl Harbor, it fell about 100 yards from me,” the Navy veteran recalls. (Photo courtesy of the Department of Defense)

PHOENIX – What started as a calm Sunday morning in Oahu on Dec. 7, 1941, ended as a terrible day in American history.

Few truly understand the gravity of that experience like Chandler resident Jack Holder.

“I seen devastation there that I’ll never forget,” Holder said. “It’s very vivid. I remember it like it was yesterday.”

One bomb hit near the front of the battleship, touching off an enormous explosion that killed more than a thousand sailors and Marines on board.

The next day, President Franklin D. Roosevelt addressed Congress and the nation in a speech: “Yesterday, December 7, 1941, a date which will live in infamy, the United States was suddenly and deliberately attacked by naval and air forces of the Empire of Japan.”

‘We knew exactly what had happened’ 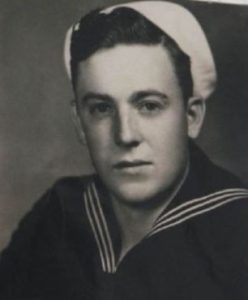 Jack Holder enlisted in the Navy in 1940, when he was 18. (Photo courtesy of Jack Holder)

Holder is one of fewer than 75 Pearl Harbor survivors still living, reports the Sons and Daughters of Pearl Harbor Survivors.

At first, Holder didn’t talk much about his service in the war, said close friend Bob Dalpe, who met Holder nine years ago at a Battle of the Midway remembrance event at the Arizona Capitol in downtown Phoenix.

“That was his first time going to an event that talks about World War II,” Dalpe said.

Holder, who turns 100 Monday, didn’t talk about his service because he didn’t think people cared about the war or its veterans.

About 10 years ago, Holder booked a spot on the Arizona Honor Flight to visit the World War II memorial in Washington, D.C.

“We landed in Detroit, and there was a throng of people 200 yards long lined up on the tarmac to greet our plane,” he said. “Prior to that, I didn’t think anybody remembered or even cared. But that changed my mind.”

Holder grew up in East Texas during the Great Depression. He was inspired by his uncle, who flew a small crop dusting plane above the farm fields that Holder’s family worked, to fly. In April 1940, at 18, he enlisted in the Navy.

He was prepared – his father had been in the Army during World War I – but nothing could equip him for the attack he experienced or the battles he fought.

Almost a year to the day before the attack at Pearl Harbor, Holder arrived as a member of the PBY Squadron VP-26, a patrol and reconnaissance group that surveyed an area ahead of a fleet’s arrival. He admired the beauty of the naval base.

“You can imagine how beautiful it was to a young Texas boy that had never seen anything except cornfields and cotton fields,” he said. “All the beautiful pineapple fields, the beautiful sandy beaches, all of the water, all the pretty girls on the beaches. It was a gorgeous place, prior to December the seventh.”

On that day of infamy, Holder was on duty at Ford Island, where the attack was concentrated. He said he can still clearly see the face of the Japanese pilot who shot at him and his fellow shipmates as they hid in a sewer ditch.

After the U.S. officially entered the war, Holder flew more than 100 missions, including many that turned the tide in favor of the U.S. in the Pacific Theater: the Battle of Midway and the Solomon Islands campaign, including the largest island, Guadalcanal. He also flew missions in the English Channel and the Bay of Biscay, on the coast of France.

Commemorations and remembrances may be even more important now, as many World War II veterans have died and few continue to tell the stories of the war. 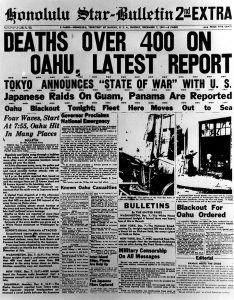 The Dec. 7, 1941, edition of the Honolulu Star-Bulletin captures the news of the attack. (Photo courtesy of U.S. National Park Service)

“World War II is as distant for kids nowadays as the Civil War was to (Holder) when he was growing up,” Dalpe said. “(Kids) have to understand what this country was like, what (veterans) did for you to have what you have now. You have to honor the sacrifices.”

In Arizona, the attack is being remembered Tuesday at the USS Arizona Memorial Gardens at Salt River. From above, the memorial replicates the size and shape of the USS Arizona, which still lies at the bottom of Pearl Harbor.

Lauressa Thomas, a tourism manager for the Salt River Pima-Maricopa Indian Community, said the “gardens are really a place to remember, to pay respect, and really just reflect on Pearl Harbor and the USS Arizona.”

“Eighty years ago doesn’t seem that long,” she said. “But a lot of our youth may not realize the impact that Pearl Harbor had. And I think the gardens are a great place to do that.”

Tuesday at sunset, the gardens will be lit up.

“The lights represent all those who perished just on the USS Arizona,” Thomas said. “To see over 1,100 columns lit up and see only about 330 not lit, really helps people understand the impact that just that ship alone had on Pearl Harbor and the casualties that we experienced.”

Casualties Holder and other survivors hope will long be remembered.