PHOENIX – A new homeless shelter is being built near Metrocenter for ages 55 or older, marking an expansion into new areas of the city with services targeting a specific population.

Central Arizona Shelter Services, a nonprofit known as CASS, and Phoenix have partnered to create Project Haven 2, which has support from the neighborhood south of the nearly vacant mall.

Project Haven 2 will be at the old Phoenix Inn near Northern and 27th avenues, which the city purchased using federal COVID-19 relief funds. The project received $7.5 million from the state and $4 million from Phoenix. It expects to open its doors next summer.

The 136-room shelter will be smaller than many other Phoenix shelters. According to CASS, fixed incomes and rising costs of living have put the senior population at severe risk of becoming homeless throughout the nearly two-year-long pandemic. 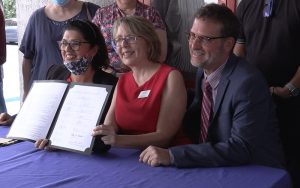 Betty Guardado, Lisa Glow and Jeff Spellmans sign the “good neighbor agreement” on Nov. 16. Spellmans is a neighborhood leader involved in the creation of Project Haven 2, which is under construction south of Metrocenter. (Photo by Balin Overstolz-McNair/Cronkite News)

“The folks that were being hit the hardest at that point were our seniors,” said Phoenix Councilwoman Betty Guardado, whose District 5 is home to the project. “We also learned that our seniors were the highest number of folks that were starting to experience homelessness.”

That led to the Project Haven 2 partnership between CASS and Phoenix.

In September, Maricopa County officials announced federal COVID-19 relief funds would offer new opportunities in their “housing first” approach to ending homelessness. One new strategy is the creation of shelters like Project Haven: Small and tailored to a specific need.

The Project Haven model was tested at a CASS shelter near Northern Avenue and State Route 51, where John Markel lived in 2020 after losing his restaurant-management job and landing on the streets.

“It sounds stupid, but it made me feel like a human being, all over again,” he said of Project Haven.

Markel, now 57, was at the shelter for four months before he once again could support himself. During those months, caseworkers helped him collect essential documents and eventually get his own place.

“My goal there was to keep to myself and do what I need to do to get out of it and not lose my identity,” he said. “I can’t say 100% that it’s worked, my sense of humor isn’t quite back. But it’s coming, it’s there. I have a ton of support from my family.” 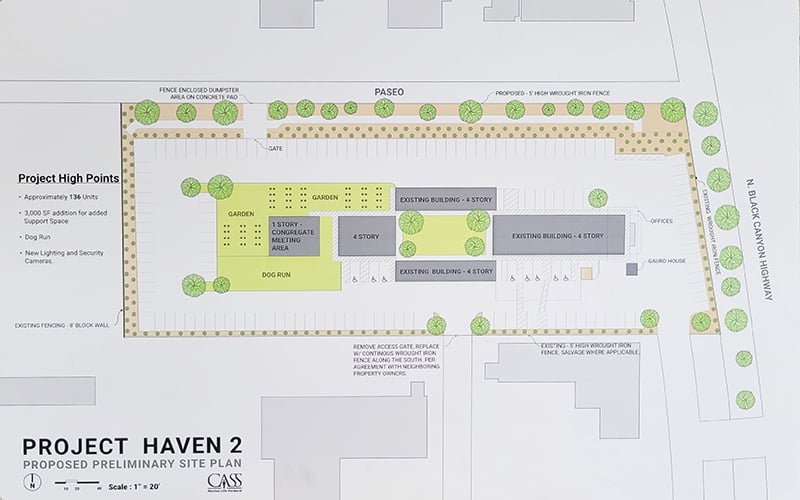 Project Haven 2 will require significant renovations to the Phoenix Inn. Plans include constructing a new building on the property, fencing and space for 136 single-occupancy rooms. (Photo by Balin Overstolz-McNair/Cronkite News)

Project Haven 2 represents a partnership between the neighborhood and organizations fighting homelessness. On Nov. 16, Guardado and Lisa Glow, CEO of CASS, signed a “good neighbor agreement,” which expresses community support for the shelter and outlines rules the shelter and its residents must follow.

Guardado worked to bring the CASS shelter to District 5 after she and some constituents toured the temporary shelter off State Route 51. They were impressed and interested in helping it expand.

Craig Tribken, director of mission advancement at CASS, said these partnerships are key because creating a shelter without neighborhood support is not possible.

“Homelessness is bad for the neighborhood, it’s bad for the homeless person, and if we don’t get support from neighborhoods, we’re not going to be able to do anything to expand our footprint for shelters,” Tribken said. 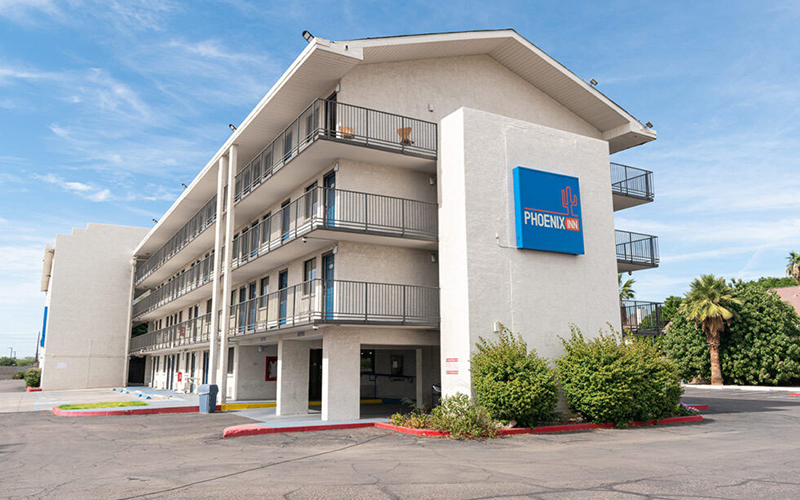 The Phoenix Inn at Northern and 27th avenues is near the old Metrocenter mall, which is expected to see significant redevelopment. (Photo courtesy of CASS)

Creating solutions across the Valley

According to Phoenix, about 83% of Maricopa County’s 1,800 shelter beds were within city limits as of February. Local leaders say more services are needed in surrounding towns, including Glendale and Peoria.

Project Haven is expected to open in summer 2022 south of the Metrocenter, an old shopping mall that’s expected to attract investments for light rail expansion and new services. 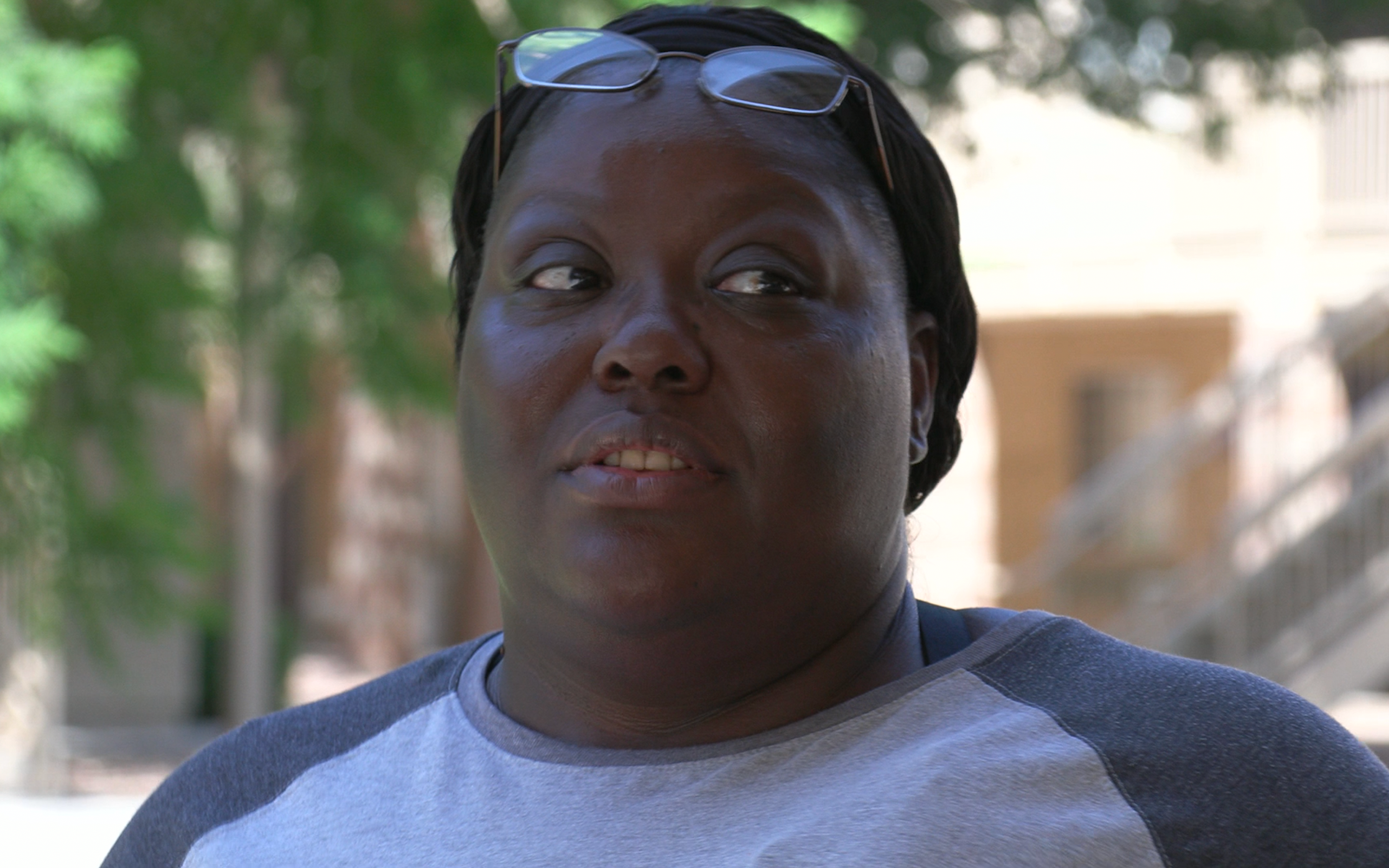 “The West Valley has seen the highest rise in homelessness of anywhere in Maricopa County,” Glow said, explaining why the new location was chosen. “Maricopa County holds 70% of the state’s homeless population; we’ve had increasing numbers in the last 10 years, particularly the unsheltered count.”

Overall, Maricopa County has seen increasing rates of homelessness over the past several years, according to Point-in-Time homeless populations counts in 2019 and 2020.

In September the Biden administration announced its House America initiative, which called on cities to use federal pandemic relief funds to combat homelessness. In Maricopa County, Project Haven is a key example of that effort.

“The city of Phoenix needs to lead, but we also need the surrounding cities to continue to help,” Guardado said. 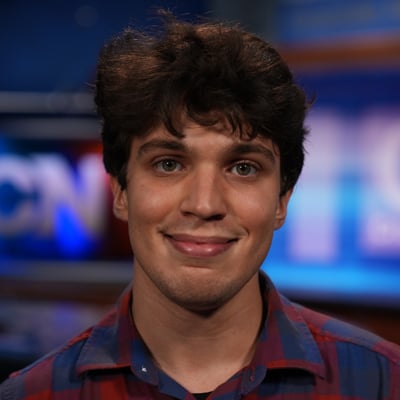