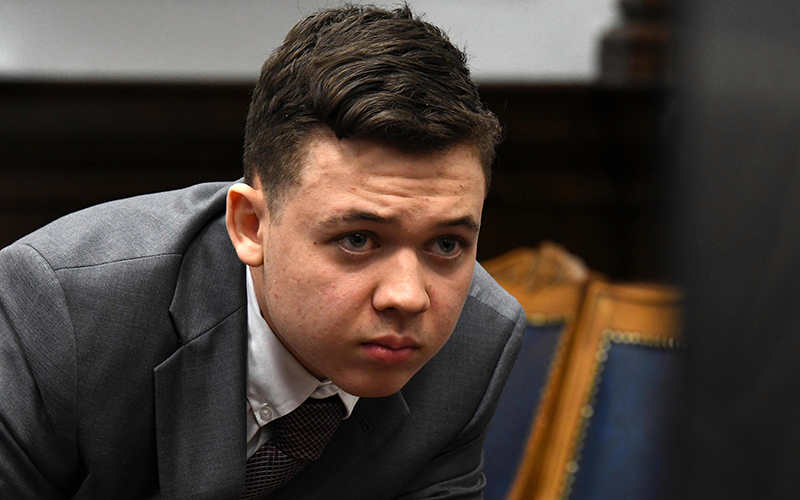 Kyle Rittenhouse at his trial for killing two men and wounding a third during August 2020 protests in Wisconsin over the police shooting of a black man. Rittenhouse, who went to the protests armed with a rifle, said the shootings were in self-defense, and the jury agreed with him. Despite his acquittal, however, his stated goal of attending Arizona State University has sparked controversy on campus. (Photo by Mark Hertzberg-Pool/Getty Images)

WASHINGTON – He is not currently enrolled in any classes or present on campus, but Kyle Rittenhouse is already casting a long shadow across Arizona State University.

Rittenhouse, acquitted of all charges this month in the killing of two people and the wounding of a third during 2020 Black Lives Matter protests in Kenosha, Wisconsin, said during his trial that he was “studying nursing” online at ASU. He later said in news reports that he intends to enroll for in-person classes at the school.

University officials said Tuesday that Rittenhouse is not currently enrolled nor has he applied for admission. But that has not kept a number of left-wing groups from scheduling a rally Wednesday to call on the university to deny enrollment to the “high-profile right-wing fascist icon,” among other demands.

Conservative organizations, meanwhile, have come to Rittenhouse’s defense, with some raising money for legal fees and others accusing his opponents of harassment and engaging in “mob rule.”

The two sides agree on at least one thing: Each thinks the university is not doing enough.

An ASU spokesman Tuesday would only say that Rittenhouse is no longer enrolled in the school’s online nondegree programs and that, as of now, he has not applied for admission to a degree-seeking program.

“Kyle Rittenhouse has not gone through the ASU admissions process,” Jay Thorne, ASU assistant vice president for media relations and strategic communications, said in an email. “Our records show that he is not currently enrolled in any classes at ASU.”

Were he to apply for a degree-seeking program – for nursing or otherwise – “the admissions process looks the same for him as it would be for any other applicant,” Thorne added.

ASU Young Republicans are proud to help lead the counter protests against these far left groups!

Rittenhouse told Fox’s Tucker Carlson last week that he “intend(s) on going in campus and pursuing a career in nursing” and that he’s “been looking into law.”

“I may want to become a lawyer,” he said in the Nov. 22 interview. “I haven’t completely decided yet.”

The Arizona State Young Republicans tweeted Tuesday that they “welcome” Rittenhouse to campus and “are proud to help lead the counter protests against these far left groups!”

“This latest effort by student groups – affiliated with the socialism and Palestine movements – to brand Rittenhouse as a ‘blood-thirsty murderer’ and have him expelled is a cut-and-dry case of harassment that need to be nipped in the bud and then thoroughly investigated,” his statement said.

Salmon, a 1981 ASU graduate, spent the last four years at the school as vice president for government affairs. His statement cites online statements made by student groups like the Young Democratic Socialists of America, Students for Socialism and Students for Palestinian Justice.

Those groups released a statement on Instagram this week with the Multicultural Solidarity Coalition that called for an anti-Rittenhouse demonstration Wednesday on campus. Their statement said that “having such a high-profile right-wing fascist icon on our campus would be giving these organizations a free pass to recruit and organize students.”

Rittenhouse, who went to the Kenosha protests armed with a rifle, said he fired in self-defense after he was attacked by protesters. The groups’ statemen said his acquittal is another example of a flawed justice system to punish vigilante violence.

Join us and rally against racist murderer Kyle Rittenhouse being permitted on our campus – Wednesday at 3:30 outside the Nelson Fine Arts Center on campus pic.twitter.com/4Hs3JxRqtY

Barring Rittenhouse from campus is just one of the demands laid out by the groups. They also want university officials to denounce him, to defund campus police and use that money to support the campus multicultural center.

Jonah Waxelbaum, an ASU graduate student with the Young Republicans, called on the university to condemn the left-wing groups.

“We’re losing our campuses to mob rule at this moment,” Waxelbaum said Tuesday on Fox & Friends. “This isn’t a mob of hundreds, it’s mobs of dozens, and it’s only possible because faculty allows it to happen.

“Since this came out, Arizona State University’s only response has been to clarify Mr. Rittenhouse’s enrollment status, not to condemn what they’re calling for, not what they’re asking of the university,” he said.

Within days of the Kenosha shootings, the College Republicans United said they planned to raise funds for his legal fees. Their website claims to have collected $14,000 – with plans to resume collection this year, but now for “Rittenhouse to sue the media for malpractice, libel, and defamation.”

In regards to the attention students have brought to the situation, Thorne said ASU has “nothing to say regarding the various opinions surrounding his (Rittenhouse’s) status with the university.”