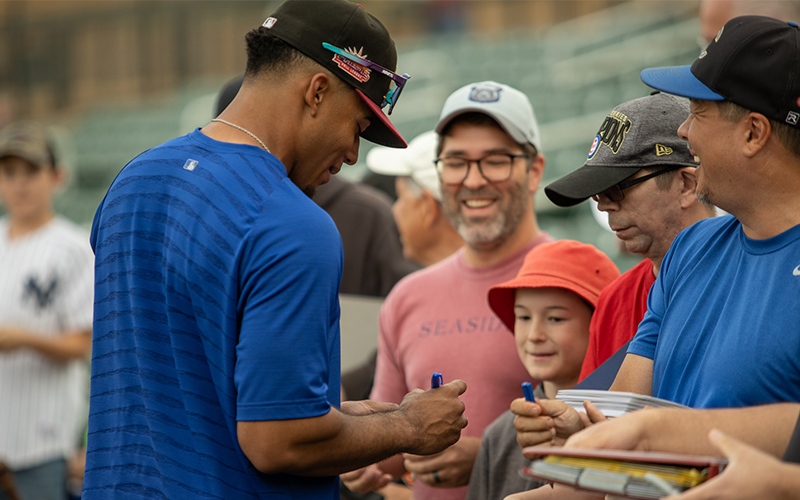 An estimated 2,500 fans were in attendance at Salt River Fields at Talking Stick for the Arizona Fall League championship game. Many came early hoping for autographs from the future baseball stars. (Photo by James Franks/Cronkite News) 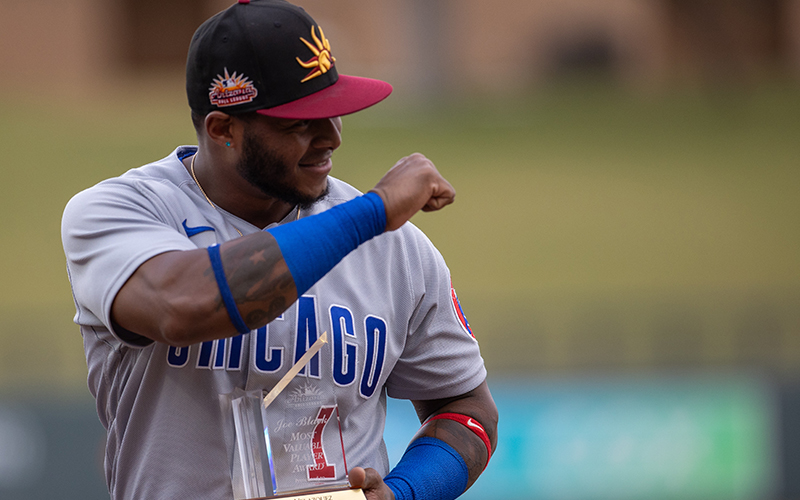 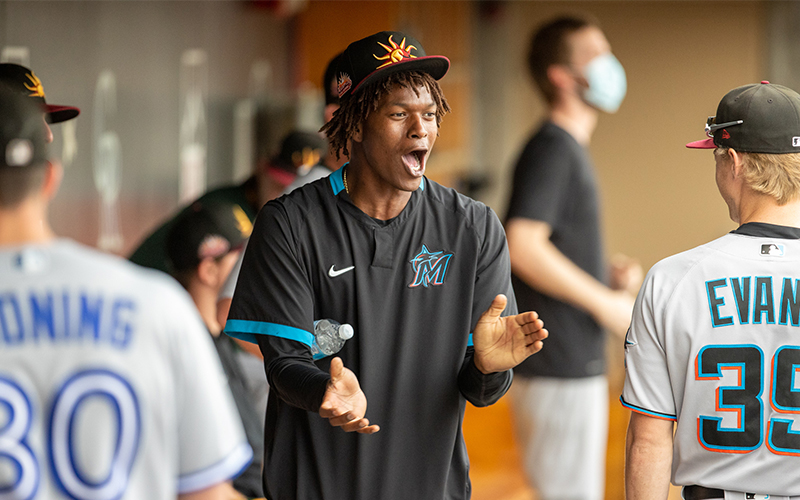 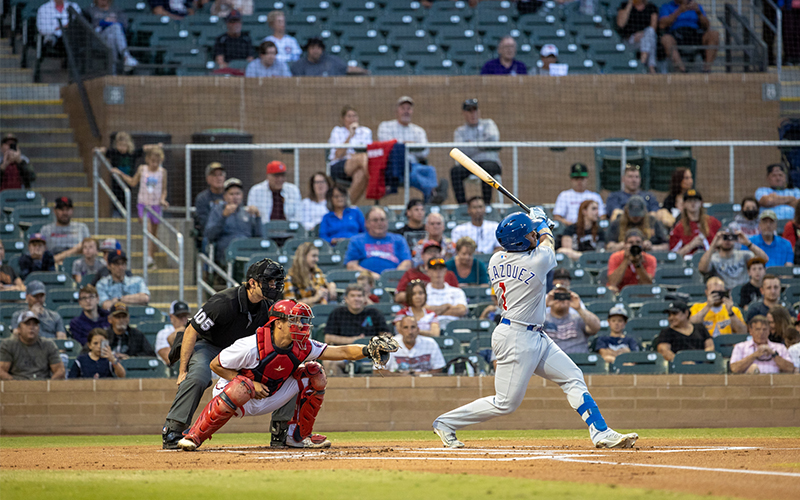 Fall League MVP Nelson Velazquez stayed quiet at the plate but his Solar Sox teammates put six runs on the scoreboard to secure the championship. (Photo by James Franks/Cronkite News) 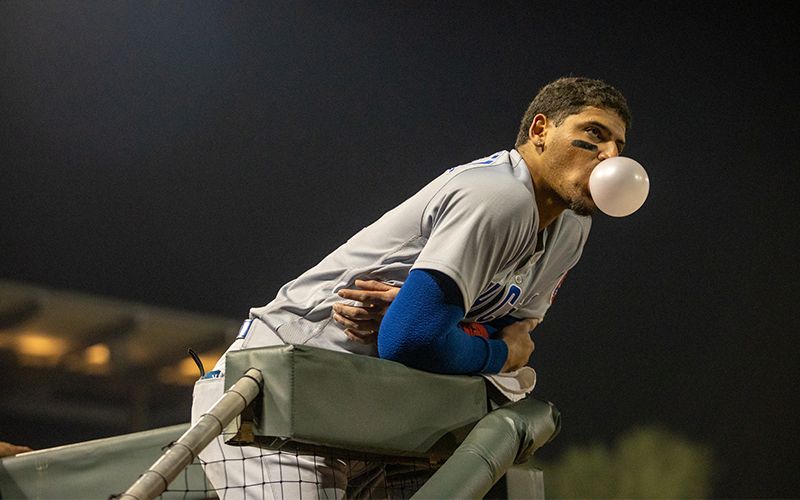 Chicago Cubs shortstop Luis Vazquez soaks in that his team is three outs away from a championship in the top of the ninth inning. The Solar Sox kept their composure until the final out and then rejoiced after the victory. (Photo by James Franks/Cronkite News) 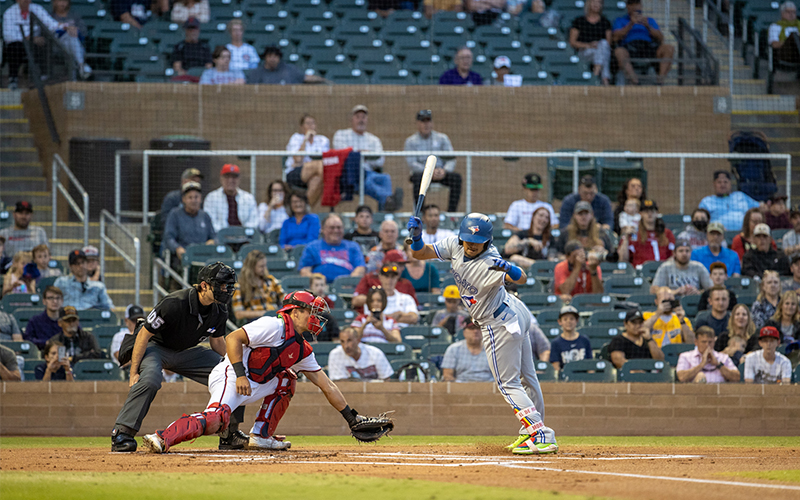 Toronto Blue Jays catcher Gabriel Moreno had a disciplined approach at the plate and got on base via a walk. He would cross home plate as one of Mesa’s six runs. (Photo by James Franks/Cronkite News) 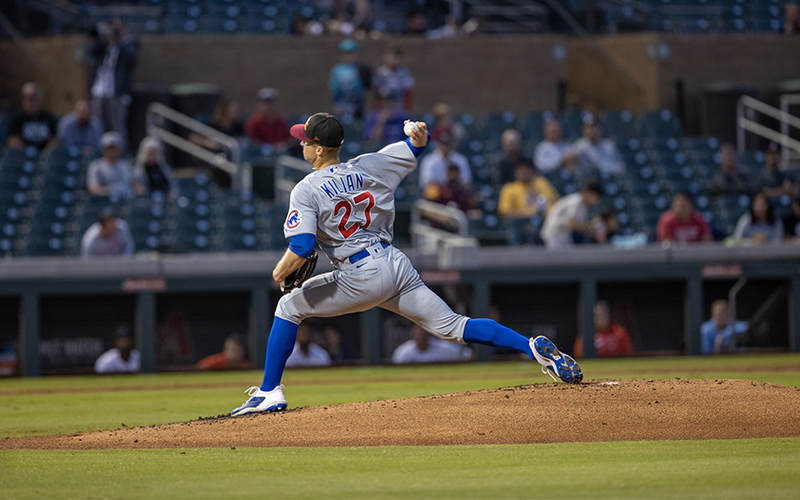 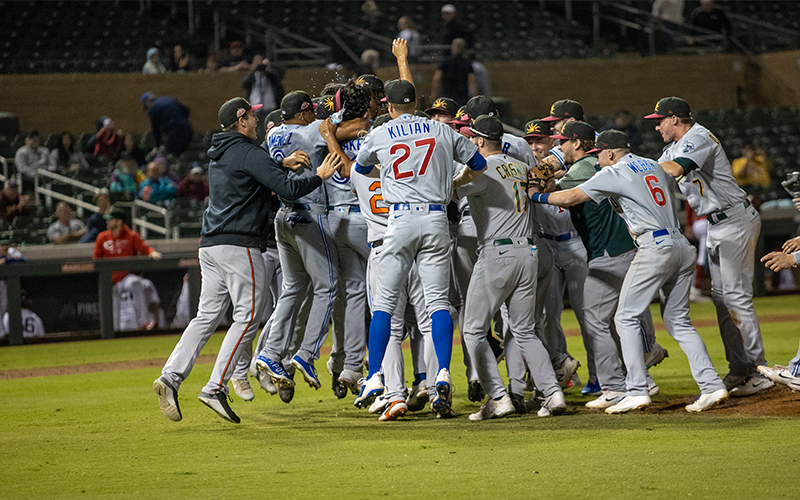 While Solar Sox players have not officially made it to the majors, many earned a championship ring and a spot on their respective teams’ 40-man roster within the course of 24 hours. (Photo by James Franks/Cronkite News)

Baltimore Orioles pitcher Nick Vespi looks away from his teammates as they celebrate. He and the rest of the Solar Sox pitching staff dashed from the bullpen to join the celebration after the final out. (Photo by James Franks/Cronkite News)

PHOENIX – In mid-October, six teams of young prospects from all MLB teams kicked off their Arizona Fall League schedules. After 30 games each and one championship, the Mesa Solar Sox left with the title after beating the Surprise Saguaros 6-0 at Salt River Fields.

The league – designed for top prospects to showcase their skills – returned after taking a season off because of the COVID-19 pandemic. Although the schedule was shorter, the format was the same, with some experimental rules in place that were tried out in minor league play this year.

The Solar Sox, which featured prospects from the Baltimore, Miami, Oakland, Toronto and Chicago Cubs organizations, were the first team to clinch a title spot as they secured first place in the East Division, finishing 15-13.

Their success came as no shock to those who followed them closely as multiple individual performances stood out during the season. Cubs prospect Nelson Velazquez won the MVP, and Marlins prospect JJ Bleday and Blue Jays prospect Graham Spraker snagged co-hitter of the year and reliever of the year, respectively.

It was not just their performances that carried them to Saturday’s championship but the chemistry of the team as well.

“We have been calling ourselves ‘America’s team’ pretty much since Day One,” said Greg Cullen, a Baltimore Orioles prospect. “ We clicked the first day we got here and I think that’s why we are here, because of that team’s chemistry.”

It took until the final game for their opponent to clinch their spot in the championship as everyone in the West Division was still alive.

For the Surprise Saguaros, which featured prospects from Cincinnati, Kansas City, Texas, Washington and the New York Yankees, they needed a victory over the Glendale Desert Dogs to advance. It was not easy but thanks to a 3-0 comeback fueled by two-run home runs from Yankees prospect Austin Wells and another solid outing by the Rangers’ Owen White, the Saguaros secured the 5-3 win.

All signs suggested a championship game that would turn into a shootout given the explosive offense displayed by both teams. Yet, the pitching by the Solar Sox is what set the tone.

The team did not give up a hit until the bottom of the eighth and it would be the only one of the night for the Saguaros. Mesa was led by Cubs prospect Caleb Kilian, who pitched six perfect frames and eight strikeouts.

“It’s great to end the year like this with a great group of guys,” Bleday said. “It’s been a long one for all of us. We have been going since February. To get here and to accomplish what we did individually and as a team, it’s been a great experience.”

Their accomplishments were due to the buy-in they exhibited since the day they arrived.

“They wanted to win and put in the work from the start and this is the result of that,” Mesa manager Lance Rymel said. “A lot of guys got together from the start and made it a mission to win every day. Nobody thought they were too big for this and they all came in and got better. A lot of them got 40 man spots or are going to be picked in (the Rule 5 Draft). They get everything that’s coming their way because they earned it.”