SAN DIEGO – Through eight halves and 160 minutes of basketball, the Arizona State men’s basketball team has experienced some growing pains. As is with many new things, it takes time for a seed to grow and flourish into a plant. ASU coach Bobby Hurley’s new-look squad in Tempe has not panned out to the results planted into the ground in the preseason.

Following a heavily disappointing 11-14 (and 7-10 Pac-12) ending to last season, when ASU had entered the year as a dark horse Final Four pick, Hurley had to tear everything down and build it back up. The Sun Devils coach saw an opportunity to rebuild in 2021 and he took it.

“I just need to identify qualities and people that I want to go to war with,” Hurley said with disappointment and frustration strewn over his face after being eliminated from the Pac-12 Tournament. “We have an opportunity to reshape our team this offseason and we’re going to work hard to do that.”

Hurley hit the transfer portal hard, as his players from 2021 departed for new destinations. Instead of going for more scoring and shooting, Hurley centered his focus around rebounding and defense. When the dust had settled, the Sun Devils roster had nine new players and just four returners – three of whom played.

Out of the four games Arizona State has played in 2021, it has lost two of them, the most recent a two-point loss to San Diego State on Thursday night which came down to the final shot, one ASU missed. Here are three areas the Sun Devils hope to get right if they are to find a groove this season. 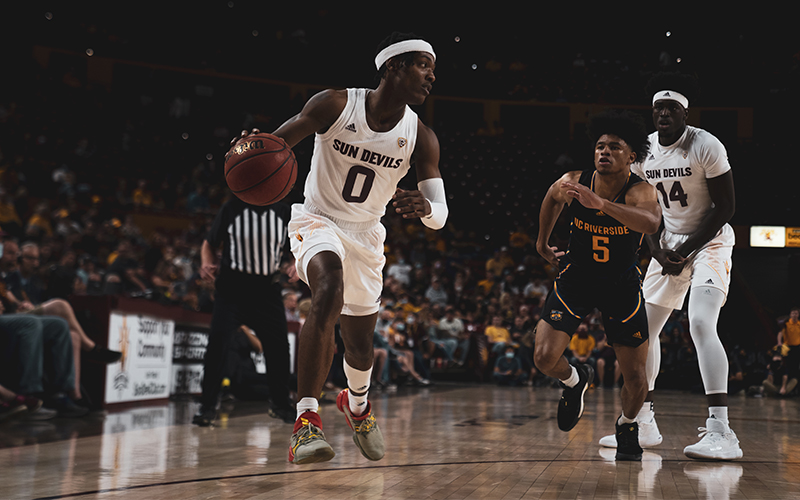 Against the Aztecs on Thursday night, Arizona State struggled vehemently to make shots from the field, specifically beyond the 3-point arc. The Sun Devils were a dismal 6 for 28, by far their worst shooting mark of the season.

One of Hurley’s sale pitches to guards during recruitment is he will let them play as themselves. In reality, that means he’s going to let them shoot. This was a problem last season as sharing the ball between departed Sun Devils Remy Martin, Alonzo Verge Jr. and Josh Christopher proved there were too many mouths to feed.

Toledo transfer guard and 2020-21 MAC Player of the Year Marreon Jackson, as well as Illinois State transfer guard DJ Horne and Boston College transfer guard Jay Heath were supposed to be the answers to this problem, shooting 37 percent, 41 percent and 36 percent from range across their careers, respectively.

In four games played, these three have shown flashes of success, but nothing consistent enough to take root. Horne, last year’s Missouri Valley Conference freshman of the year, made four 3-pointers in seven attempts in ASU’s third game, a win over North Florida.

After the loss to the Aztecs, Hurley said he believed one of his team’s strengths would be its 3-point shooting. Despite creating open looks that left Hurley satisfied, the Sun Devils had nothing to show for it.

“We weren’t making shots and I think that’s the one thing that will come around for us,” he said. “I’m hoping it comes around soon – we start connecting more from 3-point range. We’ve done it all preseason. Coming into this year, I thought we would be a really good perimeter shooting team, we just haven’t hit those. Our percentages couldn’t beat a team like this without making a few more threes.”

Jackson said he and his teammates “couldn’t really get going offensively. I was really working on getting comfortable tonight, but I missed a lot of my shots and that I regret.”

In both of Arizona State’s losses, the opposing team has cashed in from 3-point range. Case in point: the dramatic buzzer-beater loss to UC Riverside. The Highlanders stunned the Sun Devils in their second game of the season, making 14 of 29 shots from beyond the 3-point arc.

“We should’ve had more urgency to close out harder and get those guys off the line,” Hurley told reporters after the Riverside loss. “We didn’t do that. … They had a bunch of threes, and we didn’t do a good job defending that. We didn’t defend the 3-point line consistently. I thought we deserved to lose.”

Perimeter defense improved in the North Florida victory and loss to San Diego State. ASU held Cal transfer guard Matt Bradley scoreless on four attempts from beyond the arc on Thursday night. It was the smaller SDSU guards who hurt the Sun Devils, as sophomore Lamont Butler and senior Adam Seiko hit numerous shots from outside.

The improved results along the perimeter are largely due to the defense of players like redshirt junior guard Luther Muhammad, who sat out last season due to injury. A fierce on- and off-ball defender, the 6-foot 3-inch Muhammad has a reputation for toughness and sound defensive abilities. Super senior forward Kimani Lawrence, junior forward Jalen Graham and junior college transfer Alonzo Gaffney also bring defensive presence across all areas of the floor.

While these fall in the intangibles department, Arizona State has only been fully healthy for one game this season, arguably its most dominant win over North Florida on Monday. Star sophomore forward and potential first-round draft pick Marcus Bagley has only logged time in two games for ASU, UCR and UNF, as an injury from the preseason kept him out against the team’s opener against Portland, and a knee injury suffered against North Florida held him out of the San Diego State game. Bagley did not travel to California with the team.

“We will have to see how what he looks like,” Hurley said following Bagley’s injury. “We’ve had some setbacks over the past few weeks with him. He made strides and was doing very well. This would be another minor setback that we just have to be careful about.”

Graham and Heath have only played in the UNF and SDSU games after missing the first two contests due to health and safety protocols. Hurley was grateful to have them back in the lineup after the North Florida contest.

“I view those guys as two of our key players and not having them for that amount of time is not great for us,” he said. “With Jalen, I have trust that I can throw the ball inside to him and he can make good things happen on offense. Jay has shown out over his career as a scorer. … He’s had time to train and practice and can be a pretty good player for us.”

Since the offseason when this roster was taking shape, Hurley has been nothing but optimistic about his new-look lineup. Certainly, there are growing pains, but if there’s anything to be taken away from the nail-biting shootout of a game that the team endured against San Diego State on the road in front of an extremely hostile crowd, it’s that greener pastures lie ahead. With defending national champion No. 9 Baylor waiting in the wings at The Battle 4 Atlantis showcase in the Bahamas next week, the Sun Devils have their work cut out for them.

“It’s a work in progress with these guys,” Hurley said. “They’re learning each other, learning to play together. … (The SDSU game) is a good game for us, getting the chance to play a team like this on the road in a hostile environment before we go to Atlantis.

“I told my team, keep battling like this and we will have a chance to win some games.”