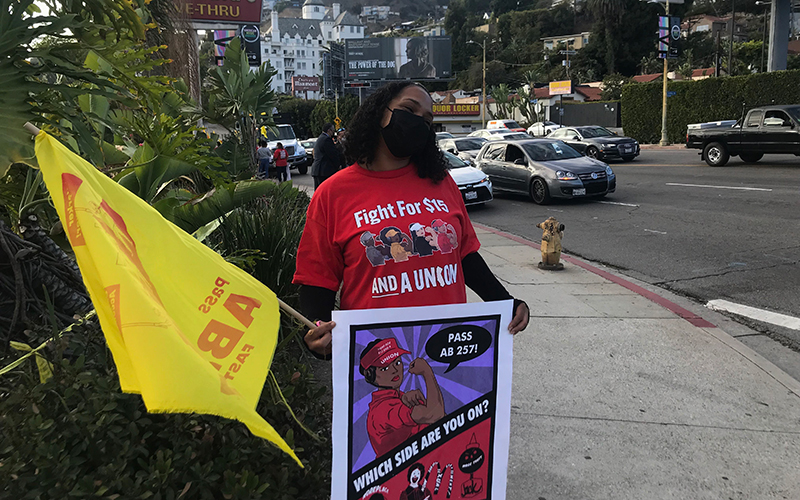 Anneisha Williams protests what she calls unfair working conditions at fast food chains, such as Jack in the Box, where she works to support her six children. (Photo by David Rodish/Cronkite News)

LOS ANGELES – Anneisha Williams works six days a week to support her six children, taking shifts as an in-home care provider and a fast food worker at Jack in the Box. She wishes she could do more to support all her children, ages 17, 14, 12, 9, 4 and 2. She needs the money.

“It’s very challenging” to raise a child on $15 an hour, said Williams, a longtime Los Angeles resident. “I might not have enough to cover the things they want to do. I shouldn’t have to work two jobs just to make ends meet. I really wish I could work two more jobs, but I can’t.”

As a Black woman struggling to get by in an industry that relies on low-cost products and worker efficiency to keep drive-thrus humming, her story is common. The fast food industry is predominantly staffed by women of color. A study from the UC Berkeley Labor Center found that of California’s 550,000 fast food workers in 2019, 80% are people of color and two-thirds are women.

AB 257 is the first of its kind in the United States. Labor legislation in California has broken ground for changes in other states, and the city of West Hollywood recently announced the nation’s highest minimum wage at $17.64.

Such chains as McDonald’s, Chick-Fil-A and Popeyes all have seen increased sales since the pandemic forced the closure of countless sit-down restaurants and limited access to grocery stores in 2020. Workers have complained about not being given the proper safety equipment and called out the fast food industry profits during the pandemic.

“(Some McDonald’s stores) had the workers wear diapers over their face,” Williams said. “That is so disrespectful, for one. It’s basically like you’re treating me like I’m some type of animal. We work for this company that makes trillions of dollars, and you’re telling me you can’t get the proper materials to protect me, knowing that I have to work for your company? Not only that, I have to go back home to my children, my family. Why would you do that?” 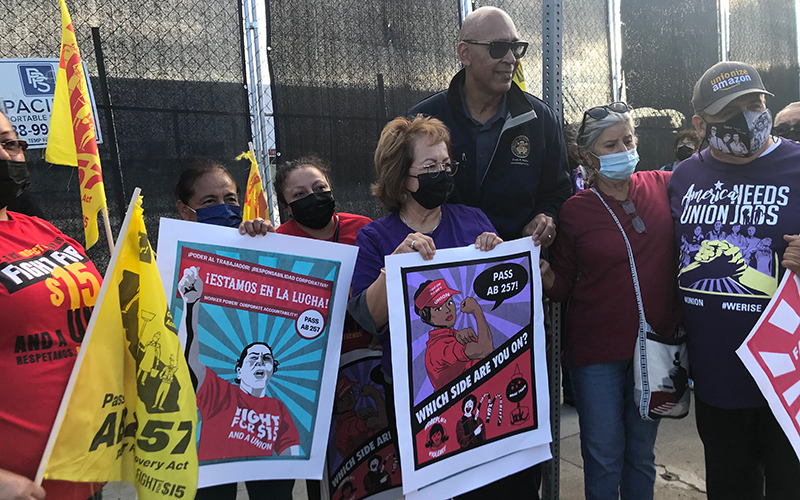 McDonald’s settled a lawsuit in August after workers in an Oakland restaurant sued over safety concerns involving COVID-19. The settlement states that McDonald’s must grant paid sick leave, regularly perform a deep cleaning of the restaurant and conduct contact tracing of infected individuals, among other health protocols. Workers at that store reportedly were provided dog diapers as face coverings against COVID-19, The New York Times reported. Other workers reported having to wash and reuse disposable masks until they frayed beyond use.

AB 257 would create a council that reviews and sets industrywide minimum standards on wages, working hours and other conditions. Workers demanded the bill amid allegations of workplace violence, sexual harassment and wage theft by some of the biggest fast food chains.

“This bill is looking to establish a baseline of what’s fair and equitable for people who are working in an industry where they are continuously being taken advantage of (with) wage theft, where we find the women in the workplace are being harassed,” Democrat Assemblyman Chris Holden of District 41 said at the Nov. 9 protest. “These are the type of work conditions that cannot exist.”

The bill, if passed, would be especially important to women of color, who dominate the industry. The crowd on Sunset Boulevard at the recent protests were mostly Latinas and Black women, and the crowd was addressed in both Spanish and English.

“There are too many examples of how women, and particularly women of color, are not getting what they deserve as far as working conditions,” Sen. María Elena Durazo from District 24, who is a Democrat, told the protesters. “This is an example to break out of that, that women would actually have a seat at the table and be able to say, ‘This is what is right, this is what we deserve, and we have to have it.’ It’s very meaningful as another example of women of color fighting for what’s right and joining street actions with legislative actions.”

Strikers held signs and flags as supporters honked their horns as they drove by. One driver heckled the protesters, shouting: “You’re worth $5!” This led to a spirited debate between the heckler and one protester.

The strike has been supported by the Fight for 15 organization, which advocates for raising the minimum wage to $15 nationally and unionizing fast food chain workers. Minimum wage in California is $14 an hour, but it will increase to $15 for businesses with more than 26 employees on Jan. 1. Businesses with fewer than 25 employees will raise to $14 an hour on Jan. 1 and will reach $15 the next year.