WASHINGTON – The House censured Rep. Paul Gosar, R-Prescott, Wednesday and stripped him of his committee assignments as punishment for a violent cartoon he posted that appeared to show him killing a liberal Democratic member and threatening the president.

Gosar, speaking to the full House, said he does “not espouse violence toward anyone” and repeated his insistence that the video was intended as a critique of Biden administration immigration policy – an issue he said he will not stop speaking out on.

But Democrats said that the House had to take a stand against members “joking about murdering each other, and the president,” and that failure to do so would lead to actual violence, like the Jan. 6 assault on the Capitol.

“What is so hard about saying that saying that this is wrong?” asked Rep. Alexandria Ocasio-Cortez, D-N.Y., the member who appears to be slain in Gosar’s video. She criticized GOP leaders who used Wednesday’s debate to attack Biden administration policies because they “cannot bring themselves to say that issuing a depiction of murdering a member of Congress is wrong.”

“This is not about me or Representative Gosar, but this is about what we are willing to accept,” she said.

But Republicans accused the Democratic majority of employing a double standard, overlooking questionable speech by their own members while rushing to take action against Republicans – what Minority Leader Kevin McCarthy called “rules for thee but not for me.”

The resolution passed 223-207 along mostly party lines, with just two Republicans – Reps. Liz Cheney of Wyoming and Adam Kinzinger of Illinois – joining 221 Democrats voting for censure. All 207 “no” votes were from Republicans. 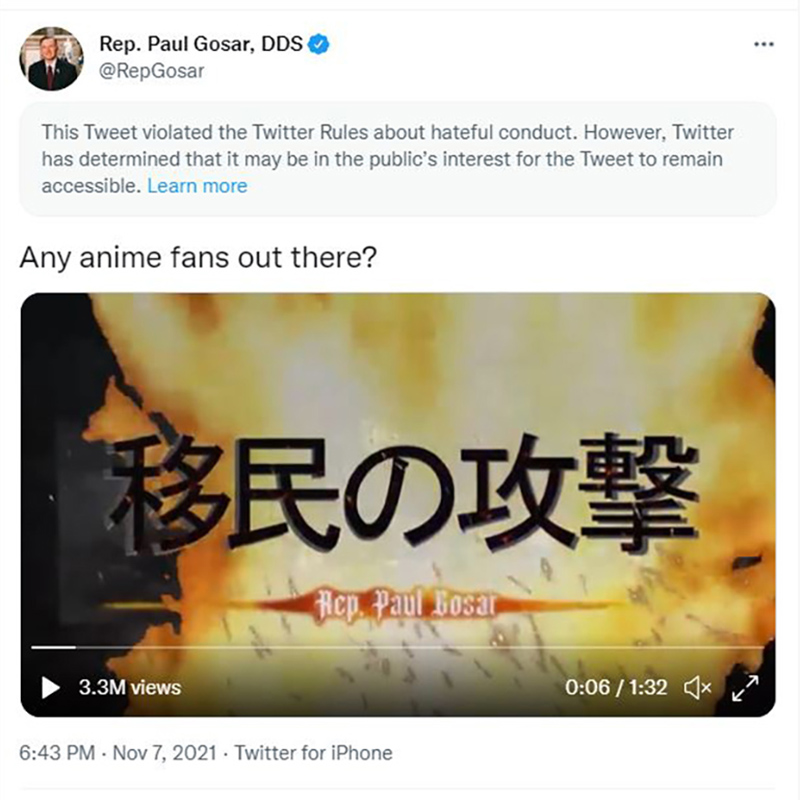 A screen grab of the tweet by Rep. Paul Gosar, R-Prescott, after it was flagged by Twitter for violating its rules about “hateful conduct” but before it was taken down entirely last week. The video had received more than 3.3 million views by that point. (Photo by Cronkite News)

The censure resolution came after Gosar posted a 90-second video to his official House social media accounts on Nov. 7 that was a doctored version of the anime cartoon “Attack on Titan,” in which humans defend themselves and their cities against man-eating giants.

In Gosar’s version, his face and those of other House conservatives, including Rep. Marjorie Taylor Greene, R-Ga., are superimposed on the sword-wielding soldiers while Ocasio-Cortez and President Joe Biden have been pasted on the titans. The cartoon shows Gosar’s character slashing the neck of Ocasio-Cortez, killing her, and lunging at Biden with swords drawn before the video cuts off.

It also shows Border Patrol agents rounding up migrants, videos of whom appear to be splattered with blood. In between those videos the words drugs, poverty, gangs, murder and more flash on the screen.

The video was flagged by Twitter for violating its “hateful content” rules. But it was left up – with a warning – because Twitter determined it was in the public interest to remain accessible, a fact noted by Gosar on the House floor Wednesday.

“Last week, my staff posted a video depicting a policy battle regarding amnesty for tens of millions of illegal aliens. This is an enemy,” Gosar said. The cartoon “directly contributes to the understanding and discussion of the real-life battle” over border policy, he said.

Gosar said he pulled the video down on Nov. 9 not because it was threatening but “out of compassion for those who generally felt offense.” By that time, it had been viewed more than 3.3 million times.

It brought a firestorm of criticism from Democrats, who called for everything from Gosar’s expulsion to demands that McCarthy revoke his committee assignments. The censure resolution was introduced last week and sent to the House Ethics Committee, but was pulled back suddenly for Wednesday’s floor vote.

Republicans said McCarthy did reach out to Gosar, who appeared before the GOP conference Tuesday and “explained the video in question.”

“He also reiterated that he doesn’t endorse violence, and that he didn’t intend his video to be viewed as an endorsement of violence. As far as I’m concerned, I think that should have been the end of the matter,” said Rep. Tom Cole, R-Okla., of the Tuesday meeting. But he said those events were “lost in the rush to … condemn Congressmen Gosar.”

No Republican defended what Cole described as the “provocative” video, but they complained that in the Democrats’ rush to vote, Gosar was not being given a chance to defend himself in the Ethics Committee.

Rep. Paul Gosar, R-Prescott, refused to apologize for a cartoon video that appears to show him attacking and killing a liberal House member and the president. The House censured Gosar for the video, which he says is a statement about the fight over immigration policy. (File photo by Pat Poblete/Cronkite News)

They also said that committee assignments have always been left to party leaders, and warned that the tables could be turned if Democrats lose control of the House next year. Gosar was on the Natural Resource and the Oversight and Reform committees.

But Rep. Jim McGovern, D-Mass., said serving on committees is a privilege for members and “when somebody encourages violence against a member, they should lose that privilege.”

It was the second time this year the House has censured a member and stripped committee assignments. In February, the House did the same to Greene, citing a series of statements and social media posts in which she endorsed violence against specific Democrats.

There are few practical consequences from censure, which can pass on a simple majority vote and merely requires that the targeted member stand before the full House while the censure resolution is read. Gosar was backed by a handful of GOP members as he presented himself to be censured Wednesday.

It is not clear whether the vote will hurt Gosar politically, but one analyst said it is sure to give him a bigger presence on the national scene.

Given Gosar’s heavily Republican district, it is “difficult to see how this censure and the resulting media attention could do much damage in a general election” for Gosar, said Jacob Rubashkin, a reporter and analyst for Inside Elections.

“The best possible outcome for Gosar politically is that this elevates his star among the far right of the Republican Party and allows him to tap in to a similar donor network that Marjorie Taylor Greene has,” Rubashkin said.

“Whether that translates into the same kind of dominant fundraising and media presence is an open question, but it certainly is a possibility given the recent precedents,” he said.