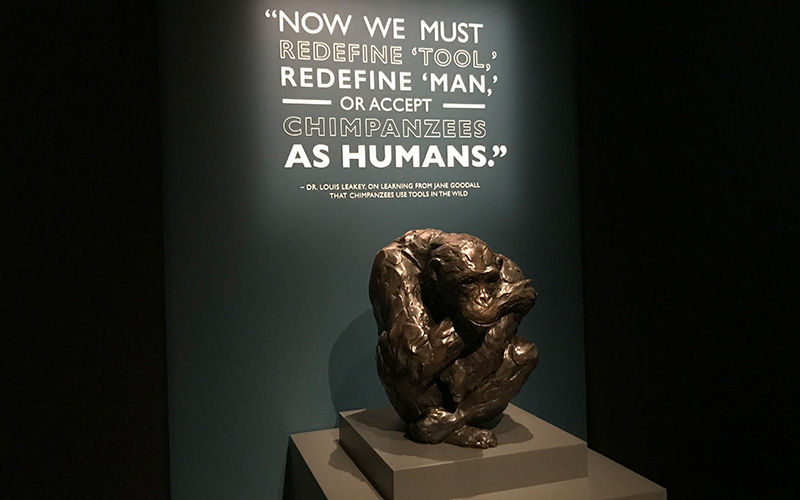 Jane Goodall and her mentor, Louis Leakey, discovered that chimpanzees use tools, a skill that previously was thought to be unique to humans. (Photo by David Rodish/Cronkite News) 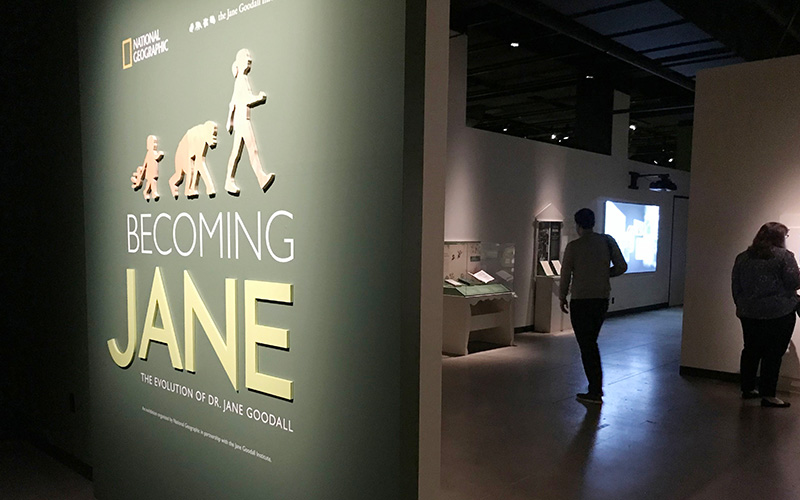 “Becoming Jane” at the Natural History Museum of Los Angeles County will run until April 22. (Photo by David Rodish/Cronkite News)

LOS ANGELES – Jane Goodall, who dedicated her life to understanding human beings’ closest primate relatives in Tanzania, is the subject of a new exhibit at the Natural History Museum of Los Angeles County that examines her evolution as a scientist and environmental activist.

Goodall, a 26-year-old British woman with no scientific training, famously lived among chimpanzees in the Gombe Stream National Park in Tanzania, where she became the first to discover that chimps are able to use tools, a skill the scientific community thought only humans possessed.

“I like the places (in the exhibit) where it points to animal intelligence because so many people don’t know,” Goodall, now 87, told an audience via video conferencing from London last week.

The exhibit notes that about 340,000 chimpanzees are spread across 21 countries, compared with nearly 2 million about a century ago. Habitat loss, trafficking and disease were three of the main causes associated with that population drop.

Many species are facing a mass extinction event that “may be the most serious environmental threat to the persistence of civilization because it is irreversible,” according to a 2020 report published in the Proceedings of the National Academy of Sciences. Chimpanzees are no exception.

The exhibit “Becoming Jane” begins with her early childhood, showing her first observations. It goes into her time in Tanzania and her first experience with chimpanzees. The exhibit ends with Goodall’s current role as an activist. Much of the exhibit describes the similarities between humans and chimpanzees, our closest genetic relative.

The exhibit offers Spanish-language descriptions on iPads by way of a QR-code style square that can be scanned to bring up each description.

A hologram of Jane Goodall explains her journey in researching chimpanzees in the Gombe Stream of Tanzania. (Photo by David Rodish/Cronkite News)

Goodall has become a major advocate of environmental and animal conservation. Goodall had her institute’s headquarters in Tucson from 1986 to 1993, before moving to Virginia. She specified the importance for global leaders to take action now, as many are at the 2021 United Nations Climate Change Conference – COP26 – in Glasgow, Scotland.

“(President Biden is) now in a position where he can truly make a difference in the future,” Goodall said during the video conference. “(I would tell him to) think carefully about what kind of future he wants.”

“We’re going to cut U.S. greenhouse gas emissions by well over a gigaton by 2030, while making it more affordable for consumers to save on their own energy bills with tax credits for things like installing solar panels, weatherizing their homes, lowering energy prices,” Biden said on Nov. 1. “We’ll also deliver cleaner air and water for our children, electrifying fleets of school buses, increasing credits for electric vehicles, and addressing legacy pollution.”

Goodall spoke of the intersectionality of climate change, wealth inequality and animal protection.

“Not only have we compromised the future of our young people, we have been stealing it, thinking that there could be infinite economic development on a planet with finite resources,” she said. “Every single one of us makes an impact on the planet every day, and unless we live in poverty, we get to choose what to live in and what to drive.”

“Becoming Jane” has a station at the end that allows you to make a pledge to make less of an impact on the environment. Goodall and the director both said it is important to demand change and to do your part.

“When I mean hope, I don’t mean looking at the world through rose-colored spectacles,” Goodall said. “I see it as we are in a very dark long tunnel, and right at the very end is a pinprick of light hope. But to get there, we have to crawl under, climb over all the obstacles in our way. That little light isn’t going to come to us, we have to get there.”