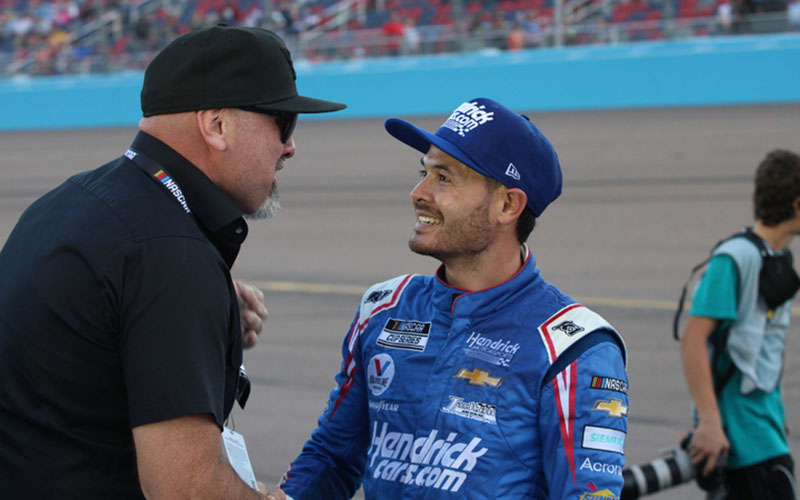 Securing the NASCAR Cup Series Championship at Phoenix Raceway was a great way for Larson to usher out the Gen-6 car and await the Next Gen one. (Photo courtesy of Amanda Valle)

AVONDALE – After Kyle Larson stole the show at Phoenix Raceway with his NASCAR Cup Series championship, another storyline quickly emerged.

The race in Phoenix marked the last time that NASCAR will field the Generation 6 car, which made its debut clear back in 2013. It didn’t go unnoticed by many in the racing community, which will see NASCAR’s “Next Gen” car make its debut next season.

“The last race hit home for me, and I think it did for a lot of folks,” said Cliff Daniels, crew chief for Hendricks Motorsports. “To see those guys on the shop floor, sending their best wishes to their final true piece of art, it’s a big deal.”

“In the automobile business, you do two things,” Campbell said. “You sell what you have in the showroom today while you prepare the next model for the showroom tomorrow.”

The Next Gen car is designed to reduce operating costs, potentially allowing more existing teams to compete and possibly attracting new teams. It also will more accurately depict the production cars that the race cars are based upon. 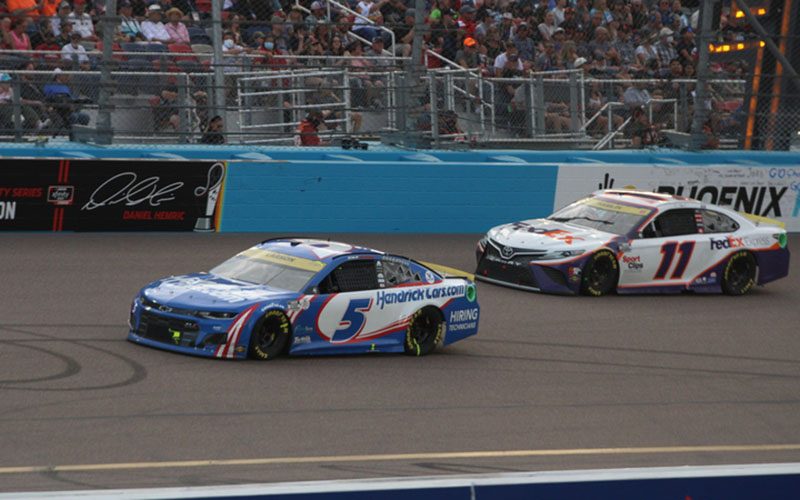 The NASCAR community is uncertain about the future of race cars after retiring the Gen-6 car at Phoenix Raceway. (Photo courtesy of Amanda Valle)

The Gen-6 cars were constructed of sheet metal, and typically required significant repairs when a car hit the wall or made hard contact with another car. The more adaptable Next Gen cars will be constructed with plastic and carbon-fiber panels designed to be safer and more easily replaced, making them more affordable by limiting the consequences when collisions occur.

The slightly shorter but wider Next Gen cars also will utilize 18-inch tires rather than the 15-inch tires of the previous generation, again giving the car a more modern, familiar look. The new cars also will incorporate more modern technology such as independent rear suspension and rack-and-pinion steering, which will provide for a wider range of adjustments for different tracks and road courses.

A single manufacturer will provide the steel-tube frame for the Next Gen car’s chassis to all teams, with substructures that are bolted onto it, again designed to lower costs by making the cars – and repairing them – more affordable.

NASCAR’s power specifications for the Ford, Chevy and Toyota engines in the cars will remain the same.

“I’ve only made a handful of laps in it on a road course,” said Larson, who dominated the 2021 NASCAR Cup Series and wrapped up the championship in Phoenix. “In the laps that I ran around the road course, it has way more grip, better tires, brakes, and can carry more top speed in the corners.”

Lastly, Next Gen’s build is a cheaper, one-dimensional car, providing an opportunity for new manufacturers to jump into the NASCAR scene. And it is designed to make NASCAR drivers prove their skill on the track even more than before.

Still, after a great run with Gen-6 cars, some in the racing community worry about what the next generation of cars will bring.

“I’m afraid it is going to be like the iRock series,” said Michael Bergmann, a fan at the NASCAR Cup Series race in Phoenix. “I’m afraid it will be the same over and over and nobody can pass anybody. It should be run what you brought and hope you brought enough. And if you don’t bring enough, you lose.”

NASCAR Cup Series driver Denny Hamlin had similar thoughts on the Next Gen cars, but he is counting on his Toyota No. 11 team to figure it out.

“We don’t know what to expect,” Hamlin said. “I think it’s going to be like the Car of Tomorrow. I don’t know how we will prepare, but I’m trusting the team to guide the ship in the right direction.”

Even though uncertainty looms over the new generation of racecars, experienced NASCAR drivers and their teams are likely to adapt quickly.

“Everyone is so good in the Cup Series that you can throw any package at us and we will all get up to speed very quickly,” Larson said.

The Next Gen series makes its debut on February 17th, 2022, at Daytona Speedway. The cars will make their debut at Phoenix Raceway on March 13th in the Ruoff Mortgage 500.