Memories of Cotton can be found throughout the Fitzsimmons house. (Photo by Savannah Nugent/Cronkite News)

PHOENIX — His positivity was everything.

That’s what JoAnn Fitzsimmons first thought when she was asked to describe her late husband, the legendary former NBA coach Cotton Fitzsimmons.

It’s a legacy that was honored in September when he was inducted into the 2021 Naismith Basketball Hall of Fame. Sunday will mark the 25th anniversary of the day he stepped away as a coach for the Phoenix Suns for the last time, a mere footnote in an impactful career of a figure long embraced by the Arizona sports community.

He won 832 games during his 21-year NBA coaching career, a stint that included three different turns at the helm of the Suns. Whether his team was winning or losing, it didn’t matter. Fitzsimmons was more than determined to stay positive.

That attitude was no more prevalent than after a loss when former Suns great Mark West witnessed his coach walk into the locker room. The team expected Fitzsimmons to be livid.

Instead, he “flushed” it away.

“We’re getting ready to hear this. Now, he literally walks in the locker room, walks to the bathroom, flushes all of it (the final statistics sheet) away,” West said. “(He says) ‘We’re just gonna flush that one down the drain and get dressed and move on to the next.’” 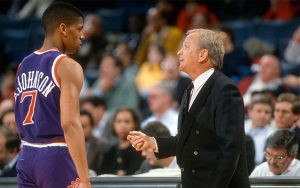 Cotton Fitzsimmons (right) was popular with players such as Kevin Johnson because of his positivity. His legacy was honored in September when he was inducted in the Naismith Basketball Hall of Fame. (Photo by Focus on Sport/Getty Images)

It sounds ridiculous to those who didn’t know Fitzsimmons, but to the people who did, it is exactly the approach that helped turn the NBA legend into a member of the 2021 Naismith Basketball Hall of Fame class.

“He treated me like a ‘somebody’ when I was a ‘nobody,” legendary broadcaster Bob Costas wrote in a letter to JoAnn.

Fitzsimmons died from complications of lung cancer in 2004. In the nearly two decades since then, JoAnn and others close to him have shared his story and fought for his enshrinement. When the news that he would be inducted arrived, the honor felt long overdue.

JoAnn attended the Hall Of Fame induction ceremony in his place in September. As she stood on stage, accepting his jacket while sandwiched between towering NBA legends and their partners, she could only think one thing: He should be here.

“It was just not something that I wanted to do on his behalf. While I was so happy that he was getting the recognition that he deserved,” said JoAnn, choking back tears, “it was something that I just didn’t want to do. And it was hard. It was really hard.”

That’s what happens to humans when they see someone they love succeed but not be able to reap the fruits of their labors. Fitzsimmons’ Hall of Fame induction was not only a celebration of his career, but of his relationship with JoAnn.

The two went on their first date on New Year’s Eve in the early 1970s in New York City. JoAnn knew it was ‘destiny’ from the start.

“I say we must have been destined to be together because I would never go out on New Year’s Eve,” JoAnn said. “To accept an invitation for a date on New Year’s Eve, with someone that I had just met, the odds of me doing that are slim to none, and yet I did.”

Multiple cities and coaching stints later, JoAnn and Cotton found a permanent home in the Valley and simply rented apartments in the cities he coached.

At one stop, former San Antonio Spurs owner Angelo Drossos hired and eventually fired Fitzsimmons from coaching the team. On the day he was hired, Fitzsimmons made Drossos promise the two would go to dinner with their families after his eventual termination.

Drossos thought he was bonkers at the time.

But when the inevitable dreadful day came and Fitzsimmons was axed, Drossos kept his promise, and took Cotton and JoAnn to dinner with his wife. A day of dread flipped on its side because Fitzsimmons focused on the positives.

“Cotton always used to say ‘You get hired to get fired,” JoAnn said. 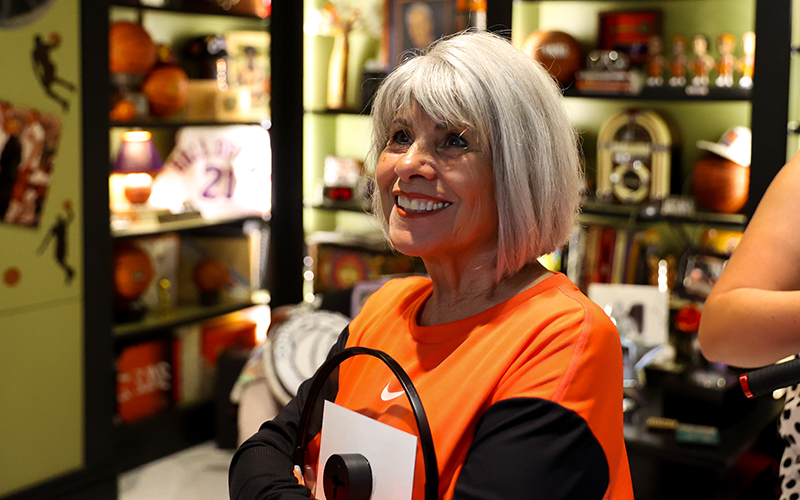 JoAnn Fitzsimmons was thrilled to see her husband’s legacy honored when he was inducted with the 2021 Hall of Fame class. (Photo by Savannah Nugent/Cronkite News)

“He was coaching at the college level (at Kansas State). I interviewed him after the (Suns’) second year, in which I finished coaching that season,” Colangelo said. “I selected him. He was one of the most positive people I’ve ever met in my life.”

Colangelo always called on his old friend when he felt the franchise was at a turning point. The Suns traded for West, Kevin Johnson and others in 1988. After putting together a group to purchase the team, Colangelo added Fitzsimmons to the Suns’ front office, where he famously kept a plaque that read “Vice President of Nothing.”

In reality, Fitzsimmons did a little bit of everything in basketball, from earning NJCAA All-America honors as a player to coaching at three levels to broadcasting and serving as an executive.

He coached Moberly (Missouri) Junior College to back-to-back national championships, which led to a job as an assistant at Kansas State. He later took over as head coach, won a Big Eight title and advanced to the Sweet 16 in the NCAA tournament in his second season, putting him on Colangelo’s radar.

Colangelo trusted Fitzsimmons with just about everything and asked him to get a deal with Cleveland done, sending the team’s only valuable asset at the time, Larry Nance, to the Cavaliers for a package that included Johnson, West and a draft pick the team would use to select Dan Majerle.

Fitzsimmons returned to the bench to coach the rebuilt team for four seasons, then moved back to the front office and into a broadcasting role in 1992.

Fitzsimmons handed the coaching duties to his assistant Paul Westphal, a former Suns star who Fitzsimmons had said would be groomed for the job when he returned to the bench.

“New uniform, new arena, new coach,” Fitzsimmons told Colangelo before that 1992 season when the Suns moved to their current home in downtown Phoenix.

They also traded for Charles Barkley and laid the foundation for one of the team’s most successful stretches. The Suns won 62 games and made their second NBA Finals appearance in 1992-93.

Off the court, Fitzsimmons is remembered for his generosity. He and JoAnn hosted parties on New Years, on NBA Draft Day, ahead of the NBA Playoffs – really at any time they had an excuse to celebrate. 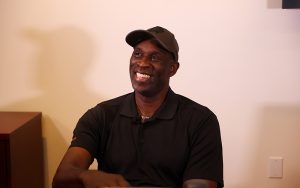 “His wife JoAnn would have things over at their house and invite everybody over there. ‘Not only are we about this on the court, we’re in this together. As long as you’re with this organization, it’s beyond just being on the floor,’” West said, repeating the generous invitations.

On the court, Fitzsimmons is remembered for his competitive, yet usually calm, demeanor. He found creative ways to motivate, especially when the Suns were competing for titles.

“We had Kurt Rambis, and Cotton had him bring his (championship) ring,” West said. “So we can say, ‘This is what we’re trying to do.’”

Fitzsimmons’ competitive nature was unmatched, and his legacy is still felt.

The entryway to JoAnn’s Arizona home is lined wall-to-wall with memorabilia dedicated to her late husband’s accomplishments. There are autographed basketballs, photos, game-worn shoes, jerseys and awards that grace every inch of the room.

While all of it is special, there is a small sign that hangs above JoAnn’s laundry room that reminds her of Cotton more than anything else.

“It kind of summarizes, I think, our lives in the NBA,” she said. “It says ‘We didn’t realize we were making memories. We just knew we were having fun.’” 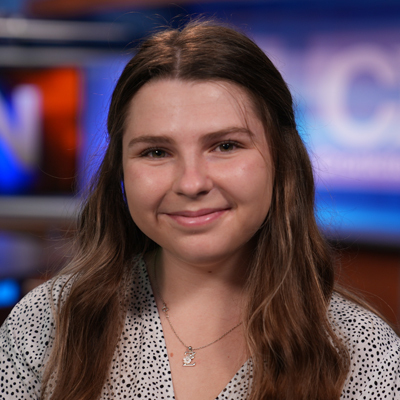