Returning All-American Anthony Valencia (right) grapples with Kendall Norfleet (left) during the Maroon & Gold scrimmage. Valencia heads into the season as one of the team’s leaders trying to retain his Pac-12 Championship title. (Photo by James Franks/Cronkite News) 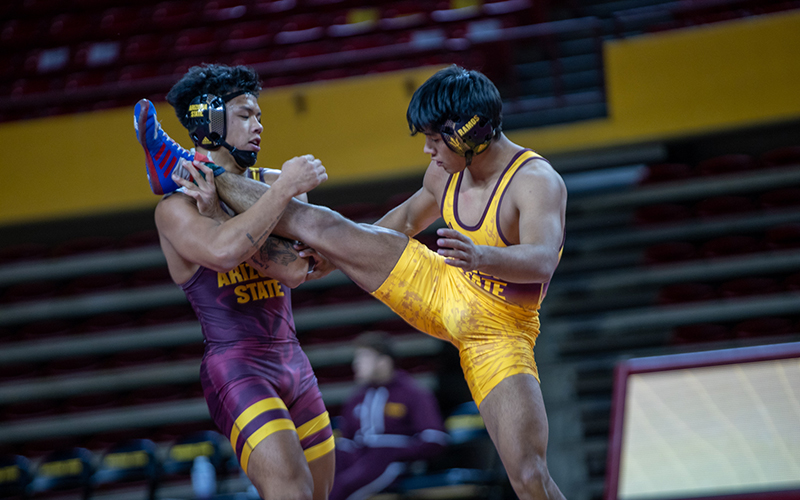 TEMPE – As members of the Arizona State wrestling program stretched on the floor of Desert Financial Arena, they were relieved to be greeted by the roar of a crowd – not the silence of cardboard cutouts.

The Sun Devils held their annual Maroon & Gold intrasquad scrimmage last Friday, giving the program an opportunity to gauge each wrestler before embarking on a season filled with championship aspirations.

Last season, when the presence of fans in arenas was limited because of the pandemic, ASU won its fourth Pac-12 Championship in five years and placed fourth in the Division I Wrestling Championships.

In addition to a strong returning group, the program brought in another All-American in Fresno State transfer Kyle Parco.

If they want to get over the hump and win a national title, the Sun Devils will have to lean on their experience and talent.

“Realistically, it takes about seven or eight All-Americans, about two or three finalists and about one or two champs to win the tournament on an average year,” assistant coach Frank Molinaro said. “When I look at our lineup, I think we can have eight All-Americans, I think we can have two or three finalists and I think it’s possible to have multiple champs.”

Molinaro knows what it takes to reach the program’s goal.

During his wrestling career at Penn State, Molinaro was part of two NCAA championship teams and won the national title at 149 pounds in 2012. He later helped lead the Nittany Lions to another NCAA title in 2016 as an assistant coach.

With a loaded roster from top to bottom, the Sun Devils could hoist a national championship trophy at the end of the season. 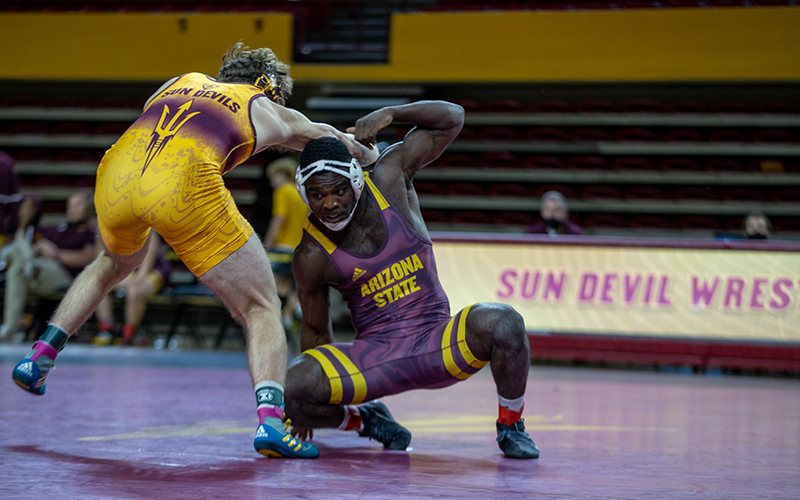 Returning All-American Kordell Norfleet (right) in action during the Maroon & Gold scrimmage. Norfleet believes that he and the team has unfinished business after placing fourth during last season’s NCAA tournament. (Photo by James Franks/Cronkite News)

Although last season’s performance at the NCAA tournament was the program’s highest finish since 1995, the Sun Devils feel they are just scratching the surface.

Norfleet, a redshirt junior from Chicago, entered last year’s NCAA tournament with an undefeated record but fell to Pitt’s Nino Bonaccorsi in the quarterfinals. Norfleet now heads into the season motivated by unfinished business.

“I hit the mental reset button,” Norfleet said. “Last year, as a team, we finished close to where we wanted to finish, but me, it was nowhere near that. This sport is such a humbling sport. It sent me to a spot where I had to kind of just reflect on what got me to the dance, what got me to Arizona State and try not to reinvent the wheel but go through revamps and stuff. I’m excited to show the world this year what we can really do.”

InterMat, a respected wrestling content website, has ASU projected to finish third at the NCAA tournament, and bringing back a large number of All-Americans has many excited for what the Sun Devils can do.

“I feel like it’s a jumpstart to this season,” said Valencia, a redshirt senior from Bellflower, California. “Coming back with all those guys, we’re ready to go. We’ve been anxious for a while. I think we’re going to start off strong, and we’re going to continue and finish strong.”

There’s a buzz heading into the final season at Desert Financial Arena before the team moves into the new multi-purpose arena, and fans can expect the Sun Devils to put on a show.

The team’s first scrimmage of the season provided a brief preview of that buzz.

MMA legends Henry Cejudo and Tito Ortiz, father of freshman wrestler Jake Ortiz, were in attendance for the Maroon & Gold intrasquad scrimmage and addressed the lively crowd from the stands during the event.

“That lets you know you’re on the right track,” Norfleet said. “When you’ve got ‘Triple C,’ (‘The King of Cringe’), and you’ve got ‘The Huntington Beach Bad Boy’ pulling up to support you, it means that you’re making some noise in the right way.”

It is clear there is something brewing in Tempe.

After a year full of cancellations and postponements because of COVID-19 protocols, the Sun Devils are excited to perform in front of the Inferno – not cardboard cutouts – once again.

“Man, it’s a relief, I tell you that much,” Norfleet said. “Hear some noise, get that adrenaline rush, get that anxiety flowing. Believe it or not, we hear some of them. You always know who’s here, who’s not here, who’s watching, who’s not watching. Having that extra presence – that added voice, that added push – it really prepares us in matches more than fans may know. We’re definitely pumped. We got it back rocking in here.”

Friday’s scrimmage was a great way to signal the start of the season, but the program understands that the work is only beginning.

The All-Americans will have to remain disciplined to get back to the NCAA tournament, and their experience will trickle down to the rest of the team.

“I feel like I’m a leader to them,” Valencia said. “I’ve been here for a while, so I help guide them in the right direction. Obviously, they’re going to make their own choices, but I feel like me stepping in and doing that part does a lot and changes the attitude of the team.”

Although he still doesn’t consider himself a veteran, Norfleet feels obligated to help in any way possible to contribute to the program’s strong sense of unity.

“I know the guys ride with me,” he said. “Their belief in me makes me want to help and try to push them as hard as I can. We all lean on one another. From 125 to heavyweight, through the lineup, we all got each other’s back. If anything, I’m familiar with the system, the practices, the ups and downs of the year. I just offer that voice to keep going. It’s a marathon, not a sprint. We keep that message steady.”

It’s all hands on deck for the Sun Devils, and this could be the year they get back to the mountaintop and claim their first NCAA title since 1988.

“The biggest thing that we need to do is believe,” Valencia said. “I think we’re experienced enough, I think we’re good enough to win a national title, but I think we all just have to believe. If we believe we can win, we will win.”