WASHINGTON – It was just one game for former University of Arizona basketball standout Brandon Williams, but it was a meaningful one – it ended a two-year, seven-month, 22-day wait to get back to the game he loves.

When Williams suited up for his professional debut last Friday with the Westchester Knicks in their NBA G-League season opener against the Capital City Go-Go he called it “a dream come true.” He danced between turns in pregame layup lines, in front of a modest but vocal crowd of a few hundred at the Entertainment & Sports Arena in Southeast Washington, D.C.

After two years away because of injury and pandemic restrictions, Williams said he needed to get into a rhythm. That rhythm quickly came back to him.

“I was good after that first period,” he said after the game. “Honestly, I had to see the ball go in. Some of the guys on the benches were like, ‘Welcome,’ just because I’m one of the younger guys and they knew that I hadn’t played too, that’s kind of a thing around here.”

It’s been a winding path to get here for Williams, who just three years ago was the No. 2 and No. 3 prospect in the 2018 California class, according to 247Sports and ESPN, respectively. Williams ranked higher than at least five eventual NBA players.

During his senior season at Crespi Carmelite High School in Encino, California, he averaged 24.7 points – a 10-point jump from his sophomore season, after the first of his knee surgeries forced him to miss his junior year. As a senior, he took No. 2 seed Crespi to the second round of the state championship tournament.

He passed on University of Oregon and Gonzaga University to commit to UArizona, to be point guard for a Wildcat offense that was transitioning away from big-man play it had with Deandre Ayton the year before. 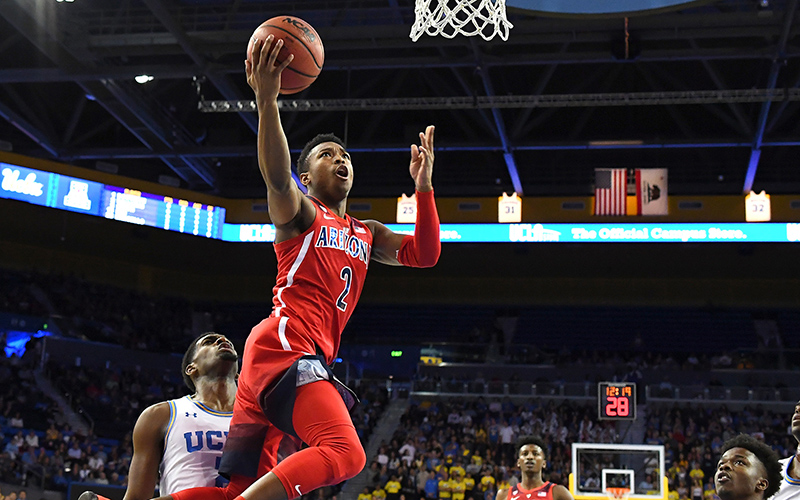 Brandon Williams drives to basket against UCLA in this photo from Jan. 26, 2019, his freshman year with the University of Arizona Wildcats. It would be the last year Williams played for Arizona, declaring for the draft in 2020 after being sidelined by injuries for a year. (Photo by Jayne Kamin-Oncea/Getty Images)

Those plans were upended when ESPN reported then-UArizona head coach Sean Miller was caught on FBI wiretaps discussing $100,000 payment to Ayton for committing to the school. Miller denied the report on March 1, 2018, but on March 2 Williams withdrew his commitment to UArizona.

After two months – and recruiting trips to Oregon and Gonzaga – Williams was back in the UArizona, where he averaged 11.4 points and 3.4 assists in 26 games as a freshman in the 2018-19 season. It was a good season for Williams, who showed deftness at scoring and play creation, scoring in double figures 17 times and leading the team in assists.

But it was not all that successful by UArizona standards, with the team going 17-15. A challenging nonconference schedule got the Wildcats off to a solid start, but a seven-game skid down the stretch of Pac-12 play kept the ‘Cats out of the NCAA Tournament.

The early end to the season gave Williams a chance to get surgery and rehab his right knee, taking a medical redshirt for his sophomore year. UArizona was set to welcome a top-10 recruiting class to a revamped lineup in 2020-21, when Williams was a junior.

But Williams cast doubt on that lineup in May 2020, when he told basketball podcast host Zach Schumaker that he “was definitely going to play” in the upcoming season, but it was “a matter of where.”

“There’s a lot of paths I can go,” he said then. “Obviously college is one. I’ll do my homework and get my information.” 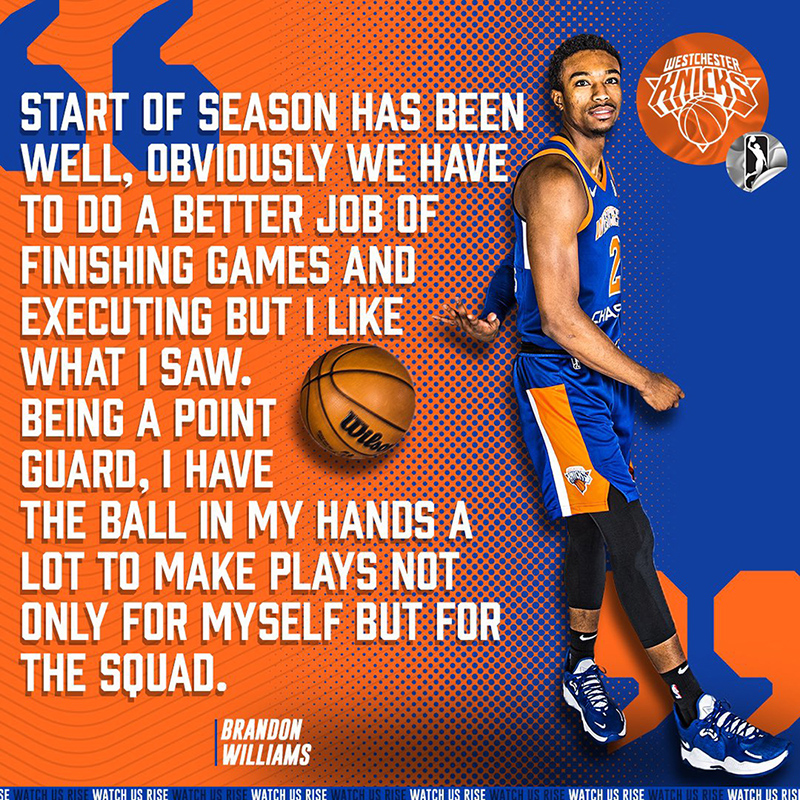 Williams ended up not coming back to Tucson for the season, declaring for the NBA draft, but failing to get picked. But he knew he would return to the game.

“It doesn’t matter where it is,” he said in May of his pending return, “the first game is going to mean something to me.”

He went home instead from Tucson to Southern California where he trained and spent a lot of time watching documentaries on one his favorite pro players, Derrick Rose.

The two now play for the same organization.

“We’re both point guards. We both put a lot of pressure on defense,” Williams said of the similarities between him and Rose.

There are other similarities. Rose, the No. 1 overall pick in 2008, won league MVP in his third season at age 22, before tearing his ACL and MCL the next year. He was forced to sit out the 2012-13 season, then reinjured his MCL two years later.

Rose’s career has rebounded over the last four seasons, averaging more than 14 points per game in a reserve role. Williams relates his own knee injury history – and comeback story – to Rose’s.

“I’d probably not have his athleticism – yet – but I’m going to get there,” he said with a laugh.

He also draws inspiration from Rose’s story – and his proximity.

“Just seeing Madison Square Garden every day, seeing the guys on the Knicks, we both practice at the same facility, that just motivates us down here,” he said of his G-League teammates.

Now just a few weeks into his professional career, Williams says his knee feels fine. While he cramped up late in the second half of the Go-Go game, he was able to shuffle off the court and get a few minutes of attention from the trainer before going back in. He said it was the moment in the game when he did not feel able to go.

“I felt like I had a knot in my calf,” Williams said. “I’m all good; my knees are a lot stronger. I think that cramp came from not playing for a while.” 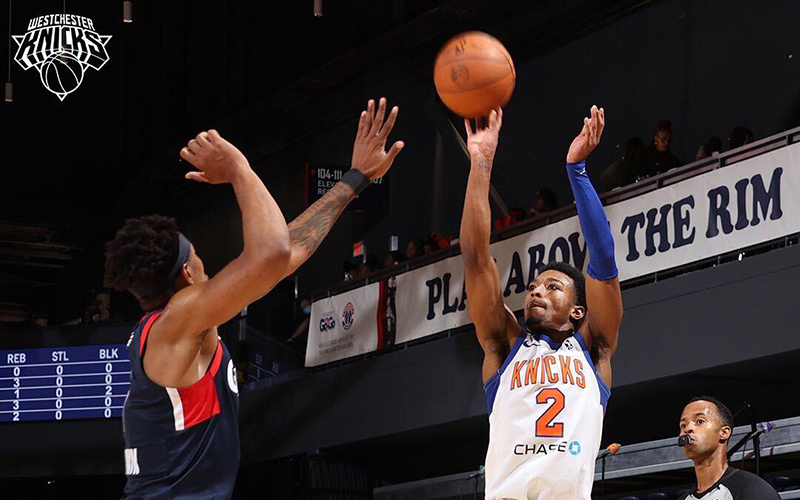 Two years is quite the while between games. His 38-minute debut against the Go-Go was second only to teammate M.J. Walker in terms of floor time.

He made his first game count, scoring 21 points on 43% shooting from the floor and eight assists, giving Williams a hand in nearly a third of the Knicks’ 103 points.

Williams’ aggressiveness got the best of him in the waning moments of the game. Tied at 101 with under 35 seconds to play, he took two dribbles from the top of the key and tried a scoop pass to a rolling Quinton Rose in the lane. The pass was too hard and too high and the Go-Go’s Jordan Goodwin went 90 feet for the go-ahead layup.

“Coach has been drawing up a lot of good plays,” Williams said, admitting fault. “I didn’t execute well in the last one.”

The Knicks ended up losing, 107-103, but Williams still saw his debut as overwhelmingly positive, especially considering that a long season doesn’t lend itself to getting bogged down over one mistake or highlight.

“It’s not always going to be an easy road,” he said outside the visitors’ locker room. “When those times get rough, just keep through it, just stay through it. Just keep putting in the work, it’s going to show eventually like it did today.”