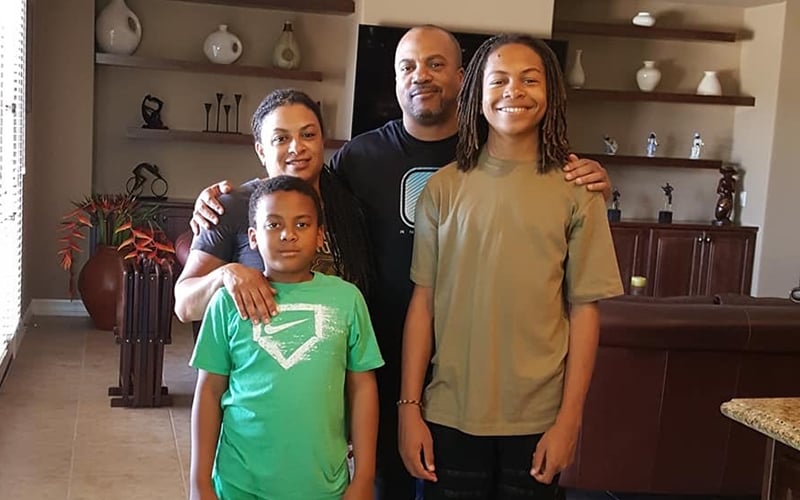 The Anderson family – Avonya and Ron (back) and Jaxen and Jordan – have a passion for full contact sports. (Photo courtesy of Avonya Anderson).

PHOENIX – In 2006, Avonya Anderson’s co-worker handed her a flyer and asked if she wanted to join a team she was forming.

Anderson glanced at the document and one line in particular jumped out at her.

“I can die playing this sport?” Avonya asked. “I don’t know about that.”

She agreed to sign up anyway. The decision would lead her family down a path filled with athletic accolades and high-impact hits.

The flyer was for a roller-derby team, and that was the day the Andersons were destined to become a full-contact family.

Their journey began in 1997, when Avonya began working for State Farm outside Los Angeles, where she would meet her future husband, Ron. In 2004, now married, the couple transferred to Bakersfield, California.

Avonya was pregnant with their oldest son, Jordan, at the time, and the young family soon discovered there wasn’t a lot of entertainment that interested them in Bakersfield. Avonya, a former multi-sport athlete who competed in track, basketball and cross country, longed for physical activity.

She was looking for a competitive outlet to complement work and family.

Avonya found the answer in that roller derby flyer.

She signed the waiver and attended her first practice. After many nights spent at the roller rinks as a teenager and young adult, Avonya knew how to skate. However, it took her some time to get comfortable again on eight wheels.

“When we first got back out there on skates, we all hadn’t skated in years,” Avonya said. “We all had Bambi legs to begin with.”

Her skating skills returned quickly, and Avonya said the roller derby league “blew up from there.”

“We had one league for two years, and then eventually that branched off into another league,” she said. “I had gotten to the point where I wanted to play a more competitive, higher-level roller derby.”

From Bakersfield, Avonya turned her sights to Los Angeles, where a friend helped her get involved with the Angel City Derby Girls, one of the city’s premier roller derby clubs, where she went by the name “Imablowbya.” From 2011 to 2017, Avonya was a blocker for the club. During the team’s best season it climbed to elite status, ranked No. 4 in the world.

Meanwhile, Ron Anderson began to develop his own interest in roller derby. Spending his Friday nights at the roller rink as a kid back in Michigan, the former soccer and football player was a strong skater from a young age. And his wife convinced him his football abilities could translate well to roller derby.

“(My roller derby career) started with me supporting Avonya,” Ron said. “I was filming their games and practices and, with my football background, I thought that they needed some help with stance, positioning, overall body position and things of that nature. So I stepped in and started helping coach them.”

After five years of coaching Avonya and her teammates, Ron found himself competing in roller derby, too. When he showed the players he was coaching that he was a proficient skater, their jaws dropped.

“The crazy thing is that I had coached for about five years before I actually got on skates myself,” Ron explained. “They didn’t know I could skate because I always coached in my shoes. When I put my skates on and was skating around, (showing) everyone that I could, everybody was really surprised.”

While coaching Avonya and her team in Bakersfield, Ron also worked roller derby tournaments as a referee. At one tournament in Indiana, he was approached by someone from a men’s team who said they admired his skating ability and asked why Ron wasn’t on a team of his own. With very little men’s roller derby representation on the West Coast at the time, Ron just didn’t know enough people that played.

“I told them there were no men’s teams on the West Coast,” Ron said. “They told me I should start a league but I said no, because of the kids’ sports and things like that. I ended up getting together with a few guys and they ended up starting the men’s league in Bakersfield.”

Ron played for teams in Bakersfield and Los Angeles before returning to a coaching role by the time the family, which now included second son Jaxen, moved to Arizona in 2016.

Despite relocating to the Valley, Avonya was committed to her team in Los Angeles and regularly made the 12-hour round-trip drive to play.

“She’s the most organized and dedicated person I know,” Ron said of his wife. “From my perspective, she’s doing an awesome job of being a mother – she’s been doing it for a long time and skating while these guys were young. She’s balanced everything so well. I’ve been a coach for 15 years and I can see the passion.”

However, their sons were also involved in sports, and balancing family and roller derby commitments became a challenge. 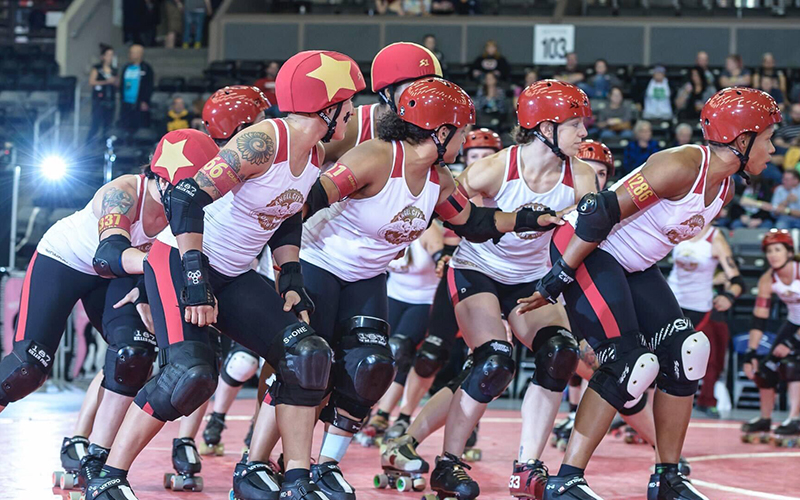 Avonya Anderson, who competed with the Angel City Derby Girls, one of Los Angeles’ premier roller derby clubs, is one part of a multi-sports family. (Photo courtesy of Donna Olmstead)

Jordan is now a senior safety at Basha High School and is regarded as one of the heaviest hitters on the roster.

“I was definitely bound to play a contact sport,” said Jordan, who has several offers to play college football from Division II and III programs. “My parents love me playing football because they know they can play rough with me at certain times, and they know I can take it. With them playing roller derby, they hit a lot. And with me playing football, I hit a lot, so we are used to it.”

His 12-year-old brother Jaxen also plays football but is more committed to playing baseball and making contact with a bat and ball.

To support Jordan and Jaxen, Avonya left her L.A. team, but not roller derby. She joined Arizona Roller Derby, where she is a star on the club that Ron coaches.

Knowing their coach’s wife was a prominent figure and athlete in the sport, the Phoenix-based team desperately wanted her to join their squad.

“It was crazy because I was coaching the Arizona team and she was still playing for the L.A. team,” Ron said. “I coached them for two years before she came over, and they kept asking me, ‘When’s your wife coming? We could use her experience! We need your wife on the team!’

“I told them I wasn’t going to pressure her; she’s going to do her thing and if she decides to join, that’s her decision.

“After two seasons of sticking it out in L.A. she decided to go ahead and join and they were all so happy. I was happy, too, because the long drives to L.A. and back often had me worried. I was up late at night waiting for her to get back.”

“Whenever I went to a team, they were going to get him regardless if I was coaching or not,” Avonya said. “When he stopped coaching (me) and I was still playing in L.A. for that year, it was kind of weird to not have him there coaching.“

Like many aspects of life, the COVID-19 pandemic has taken a toll on the roller derby club.

A number of Avonya’s teammates have retired. She pondered hanging up the skates herself. And because there is so much contact in roller derby – remember, “Death May Occur” – injuries can take a toll. Avonya has suffered two ACL tears, a broken ankle and a torn meniscus across her career.

Due to injuries and the pandemic, she hasn’t been on skates since March of 2020.

“A lot of my team has been going to skate parks and getting together,” Avonya said. “But I have not skated due to safety concerns with COVID, and I’m just constantly busy with the boys. We are going to try to get something going in January 2022, but I haven’t made any decisions yet.”