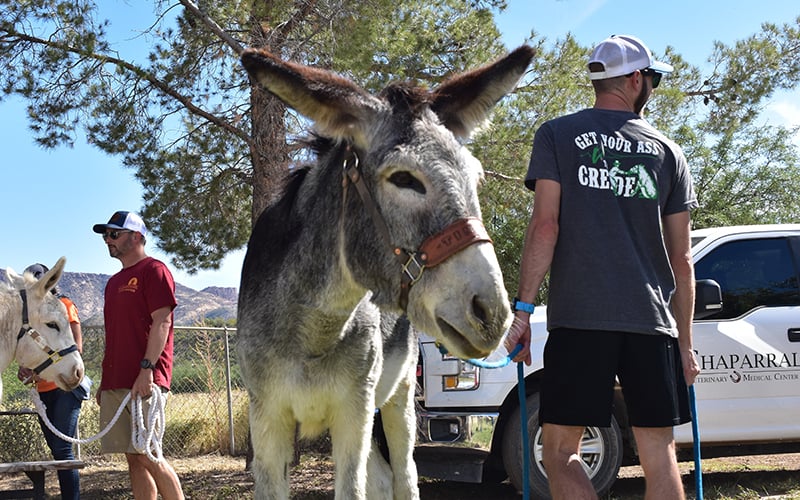 SUPERIOR – A few hours before high noon, about 80 competitors – in this case, donkeys – strolled through Main Street before wandering over to nearby old mining trails. Around 1,000 human fans lined up along the dusty avenue, cheering the animals as they went hoof-to-hoof in either 3-, 6- or 12-mile races.

And once again, the Superior Burro Run was off. Nearly all the competitors walked alongside their donkeys through the historic Arizona town while also learning about the ancient ways of mining.

It’s a tradition that has been around for decades. Burros were introduced into the Southwestern United States in the 1500s. Commonly known as donkeys, the hard-working animals played a huge role in mining and exploring. They carried the miners’ tools, hauled resources collected from the mines and much more.

However, by the late 1940s, following World Wars I and II, the demand for ore was low and mining communities were dying. With the towns on the brink of disappearing, the remaining residents looked to find a niche way to breathe life back into the mining burgs that were sprinkled across America’s West. 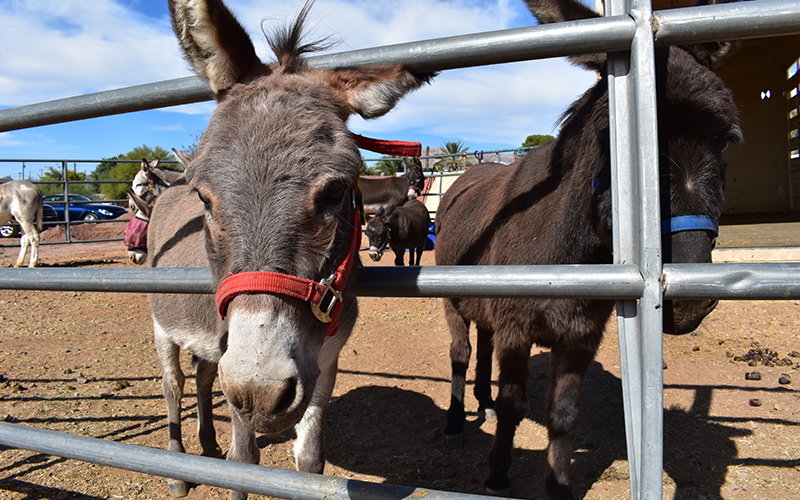 Burros played a huge role in mining and exploring, hauling tools and resources extracted from the mines. (Photo by Nick Zeller-Singh/Cronkite News)

About 70 years later, Arizona jumped on the idea. In the past few years, burro racing has taken place in Superior, Black Canyon City and Tombstone. In the Arizona races, tourists are not the only source of income. At the Superior Burro Run, the event featured competitors from California to Georgia.

Although every human competitor comes with different experience levels, they share the same passion for keeping the tradition alive.

“The history of burro racing is one of the coolest aspects because we run through old mining camps,” said Jon Roberts, a racer from Colorado who competed in the 12-mile Superior race Oct. 23. “It is a part of our history and you get to be a part of that because these animals were a part of it.”

CORRECTION: An early version of this story misstated the history of burros in the third graf. They were introduced into the Southwest in the 1500s. The story here has been updated, but clients who used earlier versions are asked to run the correction found here.

Joe Polonsky and Roland Brodeur joined Roberts as the competitive Colorado crew. After experiencing Colorado’s history with the sport, they wanted to expand their burro racing horizon into new mining towns.

“I did the Superior race two years ago because I’ve never competed in Arizona before and wanted to,” Polonsky said. “We wanted to come down and see the new race course and meet the new race director and compete.”

Brodeur, who also competed in the 12-mile race in Superior, was impressed with the setup in Arizona.

“Everyone seems very excited to have such a new event here,” Brodeur said. “Some of the Colorado races have been going on for 70 years and are very established. But, with the sport being so new in Arizona, it seems to excite the community.”

Since the sport has a small following, many communities and organizations work together to keep the excitement flowing.

“At times, burro racing is a dying sport,” Lee said. “We have (been) encouraged to keep the sport alive by working with the communities and make sure the races happen.” 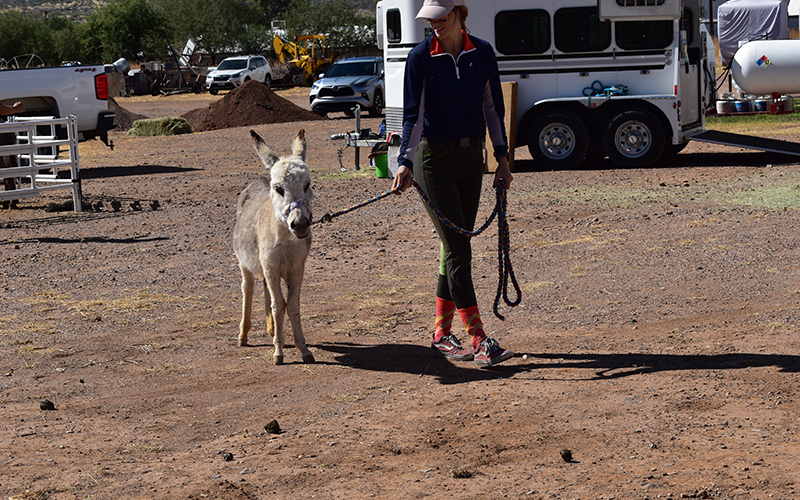 Burros must be checked by a veterinarian before they can race. (Photo by Nick Zeller-Singh/Cronkite News)

Besides building communities in the mining towns, burro racing builds communities within the sport.

“It is something so unique and people love it,” said Shane Weigand, who works in media relations for the Western Burro Pack Association. “Since it is a pretty small sport, you see the same people and get to reconnect with them.”

As burro racing brings a variety of competitors and spectators to mining towns, burro organizations have the perfect opportunity to spread their message. The Burros Rock Arizona & Yonder (BRAY) Club used the Superior race as a chance to spread its mission: to advocate, showcase, promote and educate about burros.

The organization, said BRAY board member Kelly Smith, saw the Superior Burro Run as an avenue to teach about and have fun with donkeys. Founded during the pandemic, BRAY’s game plan to spread awareness worked well in the Superior race.

Burro racing relies on a strong partnership between human and animal. Although humans do not ride the donkeys during the race, their relationship with each other is unique.

Burros are similar to other domesticated animals in that they are able to sense when a human is not feeling well, Lee said. If the burro realizes its human partner is not 100%, it will stop putting effort in the race and instead turn its attention and affection toward its owner. 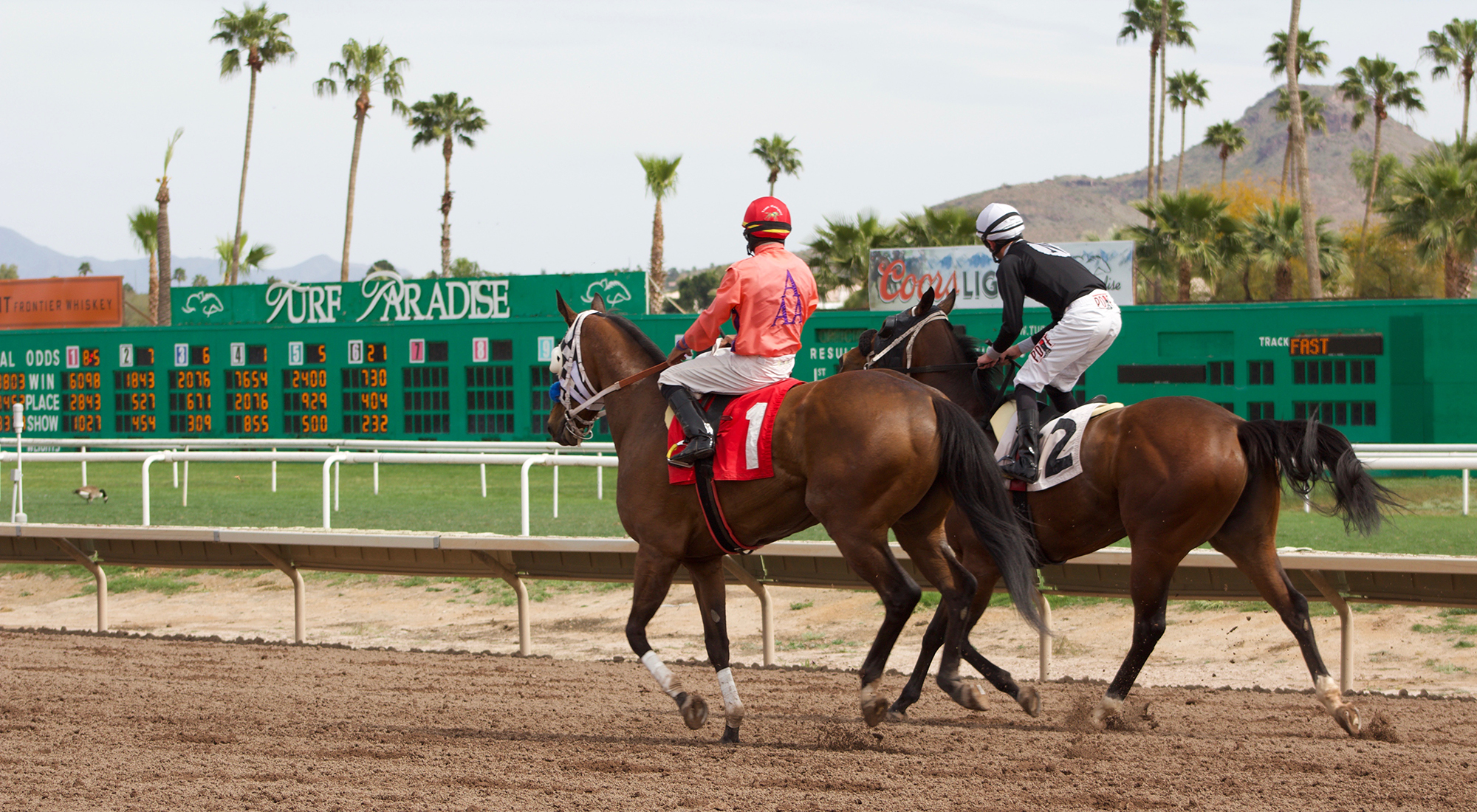 Because the race is a 50/50 effort, humans and their burros must be on the same page.

“It is a challenge because it is a potato sack race with your race partner,” Brodeur said. “Only when you and your donkey are having great days and communicating, will you be able to go anywhere.”

Besides having a partner carry the load, the race is different because it helps boost the donkey’s productivity. Burros, Lee said, are the best pound-for-pound working animal until their final day. Recently, Lee saw one of his donkeys prove this theory in a spectacular manner.

“I have a donkey named Blaster,” Lee said. “He is a 32-year-old miniature, which is getting old for a donkey. For a quarter of a century, he was the official mascot for the Colorado School of Mines, but they decided to retire him. Ironically, just after the announcement was made, Blaster won a burro race.”

Although Blaster did not compete in Arizona, he and the other burros look to continue the historical sport in the desert for years to come.

“It’s a cool way to pay homage to Arizona’s history,” Weigand said. “A lot of these Western states were started on mining and they used burros for that. It is great to continue their heritage.”