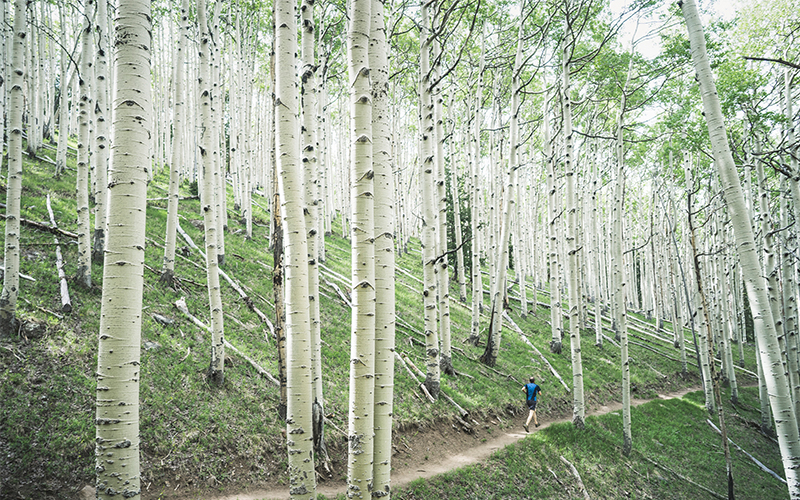 It’s not just the beauty and the aspen trees that inspires running in Flagstaff. It’s the high altitude that provides a beneficial training experience. (Photo by The Open Road Images/Getty Images)

PHOENIX – Breathing becomes a chore at around 5,000 feet above sea level. Steps feel heavier, distances much longer. Running requires strength that can only be obtained through prolonged exposure to the exceptional elevation.

The Northern Arizona University cross-country teams are consistently successful because of a unique factor that is involuntarily forced into the athletes’ training – altitude.

Flagstaff, the home of NAU, has an altitude of almost 7,000 feet, making it a prime spot for endurance training, not only for NAU athletes but for world class athletes from around the globe.

The power from training in Flagstaff year-round is NAU runners’ secret weapon. The Lumberjacks swept the Big Sky Conference Cross Country Championships Saturday, taking first in team and individual in both men’s and women’s. The men’s team is No. 1 in the nation for the fifth week in a row, while the women are ranked No. 18. Next up are the NCAA regionals Nov. 12 in Provo, Utah, followed by the national championships Nov. 20 in Tallahassee, Fla.

“People come here to train from all over the country and all over the world because it’s a great spot,” said Ryan Raff, a senior on NAU’s cross country team.

Flagstaff, at the base of the San Francisco Peaks, housed the training of Olympic athletes from nearly 30 different countries before the 2020 Tokyo Olympics, validating the city’s slogan of “turning thin air into gold.”

“The demand of going to Flagstaff has only increased over the years,” said Dan Bergland, an exercise physiologist for HYPO2 Sport, a Flagstaff-based company that specializes in altitude training. HYPO2 Sport has attracted elite athletes from around the world as they look to enhance their endurance performance in synergy with the high country’s imposing altitude.

“A lot of athletes, they’re coming to Flagstaff to gain more red blood cells,” Bergland said. “We have (the) most accurate way of measuring that.”

In higher altitude environments, people take in less oxygen per breath, according to the UT Southwestern Medical Center. The lack of oxygen causes the body to produce more red blood cells, because red blood cells help move oxygen throughout the body. Altitude training allows for athletes to have the production of excessive red blood cells that puts them at advantage with their oxygen levels to enhance their performance at sea level.

“I do some physiological stuff on (NAU athletes), blood testing, checking their iron levels,” Bergland said. “That’s very important so we check that periodically for all the track and cross country athletes.”

Ever since the 1968 Mexico City Olympics took place at an altitude of over 7,000 feet, Bergland said, training at extreme heights has become more popular. Athletes who trained at altitude were those who medaled. The ‘68 Olympics were more challenging than most, and were shown through results in endurance events.

The interest in altitude training led to the Center of High Altitude Training opening on the NAU campus in 1995. In 2009, HYPO2 Sport picked up the program and continued to keep Flagstaff a prime location for altitude training.

“I think it’s special that we just get to be up here year round and train. I think we get a lot more out of it,” said Pipi Eitel, a senior on the NAU cross country team.

The Lumberjack athletes have been aware and grateful of the opportunity they have to consistently train in the high country. Eitel is from Belgrade, Montana, a town that sits at just under 5,000 feet, but she said she still notices the difference when it comes to running in Flagstaff.

“All of our races this season, with the exception of regionals, are at 2,000 feet or below so it’s always like an extra boost,” Eitel said. “When we go down to sea level, and we’re racing, we’re a really strong team.”

Flagstaff’s altitude is immediately recognizable to athletes coming from lower elevation, even if they have experienced it before.

“I grew up in Utah at like 5,000 feet so I’ve been semi-adjusted to altitude but just coming here to Flagstaff for the last four years, I feel like I’ve really gotten a lot out of it, and really pull a lot of my strength from that,” Raff said.

Although altitude is advantageous in regards to oxygen, Bergland said it can actually inhibit the performance of athletes as well. HYPO2 sport has had to recognize the challenges that accompany training at altitude.

Bergland said adjustments are necessary for training at altitude to ensure athletes still get the speed strength they need. Because altitude forces athletes to train slower, muscle memory isn’t automatic. Athletes at altitude have to find accommodations, like declining treadmills, to help build the muscles that contribute to their speed.

“Your muscles aren’t adapting to that speed,” Bergland said. “The coaches have to be pretty innovative about that.”
The NAU coaches adjust their training based on each course, Eitel said.

“With cross country you want to be really strong, not necessarily really fast, so that each course you go to you can compete on,” Eitel said.

Since cross country competes on a variety of courses throughout the season, speed is a necessity in any race, but versatility is a priority that NAU focuses on while training. Being located in Flagstaff makes that possible for the Lumberjacks.

The variety of terrain surrounding Flagstaff helps elite athletes as they can train in mountains — Humphreys Peak is Arizona’s highest natural point– ponderosa pine forests, and desert, all in one afternoon.

“I love Flagstaff, and I feel super lucky to be able to run and train, and do the thing that I love,” Eitel said.