PHOENIX – Affordable housing is crucial to everyone because it provides stability and builds a sense of community, housing advocates say, but Arizona needs more federal funds to build it.

“Without housing stability, every part of our lives is affected – we saw that with the increase of hunger, mental health, substance use, domestic violence and other challenges” during the pandemic, Diana Yazzie Devine, president and CEO of Native American Connections, told reporters at a news conference last month in Phoenix 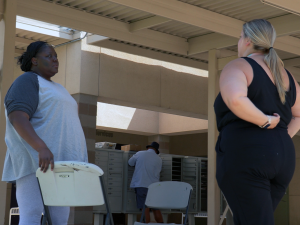 Data collected by the National Low Income Housing Coalition shows that only 26 rental units were available for every 100 extremely low-income households in Arizona. The coalition said Arizona is among the worst markets for affordable housing, only behind Nevada, California and Oregon.

At the news conference, Native American Connections and the Arizona Housing Coalition appealed for passage of the Build Back Better agenda. The $150 billion for housing “will enable the construction, rehabilitation, and improvement of more than 1 million affordable homes,” the White House says.

Democrats in Congress are working through final sticking points among members before a vote on the bill. Rep. Ruben Gallego, D-Phoenix, said it is crucial to get this funding now, especially because the pandemic has left so many people without homes. He also believes funding will create more stability to allow people to get back on their feet.

“It’s not just single men, it is also families that are now affected and becoming homeless,” Gallego said. “It’s very difficult, especially in Phoenix if you are a working mother like my mom was, to actually afford a place – a place that is stable where you can afford to raise your kids and send your kids to school.” 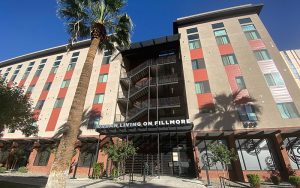 Native American Connections’ Urban Living on Fillmore is located on 2nd Avenue and on Fillmore Street. Rent for a three-bedroom apartment could be as low as $790 – less than half the cost of comparable units in downtown Phoenix. (Photo by Alexa Glidic/Cronkite News)

Yazzie Devine said Native American Connections’ latest multifamily housing building on Fillmore Street and Second Avenue, Urban Living on Fillmore, is a prime example of how federal funds could be used to create a stable living environment for low-income families in need. In the apartment complex, large units are available at rates more affordable than typical apartments downtown. The nonprofit is primarily funded by grants and contributions.

Rent for a three-bedroom apartment downtown is about $2,000, Yazzie Devine said, but with federal subsidies, it could be as low as $790. Joan Serviss, executive director of the Arizona Housing Coalition, said a large infusion of federal funding potentially could end homelessness.

Native American Connections is starting a new housing project, the Moreland, which is slated to open in 2023 on Third Street south of Interstate 10. It will have 216 affordable units. 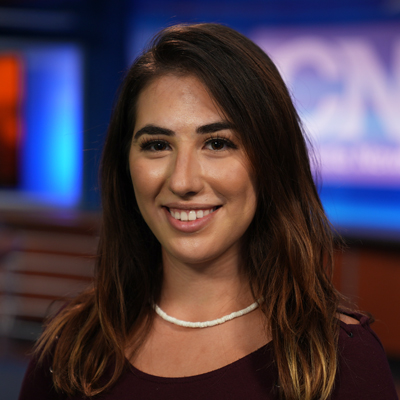 Alexa Glidic expects to graduate in May 2022 with a bachelor’s degree in journalism. Glidic, who has freelanced for local news stations, is working in the Phoenix News Bureau.