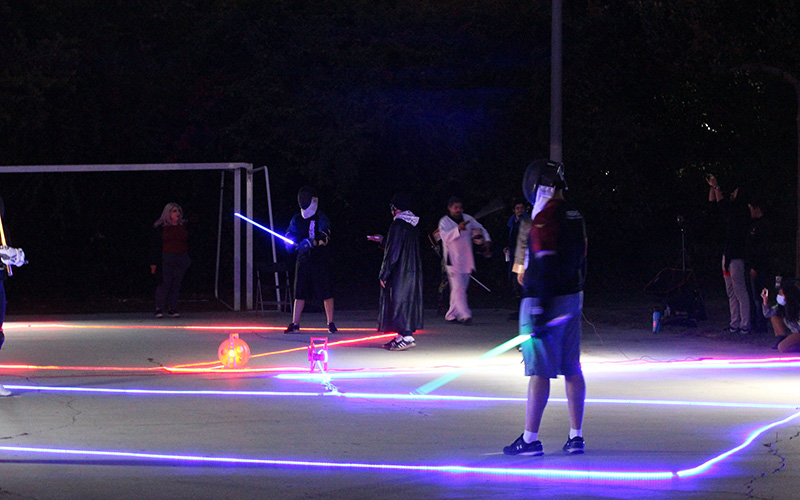 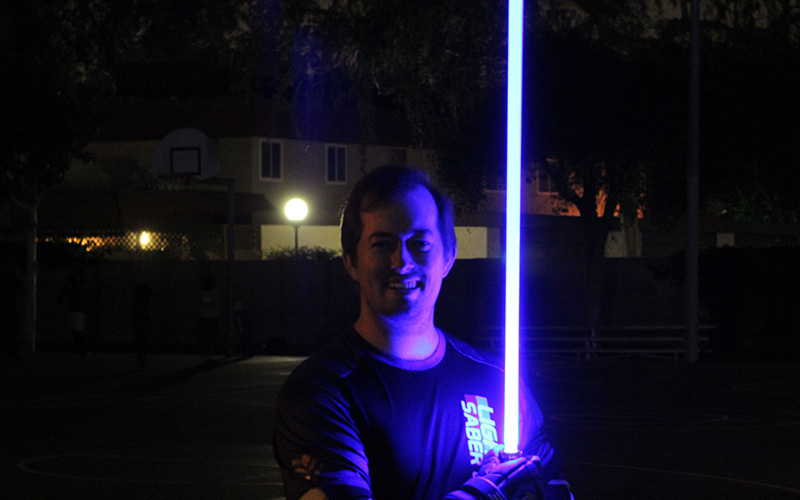 Brandon Nease competed with his blue saber, the same color as that of his favorite jedi, Obi-Wan Kenobi. (Photo by David Rodish/Cronkite News) 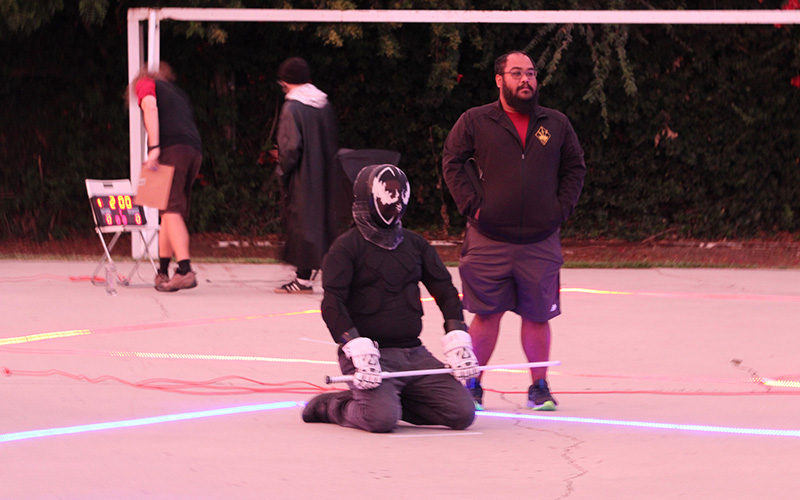 Thom deMartino, shown waiting to compete like Qui-Gon Jinn in “Episode I,”  was the top-ranked competitor and one of the few wielding a red lightsaber. (Photo by David Rodish/Cronkite News) 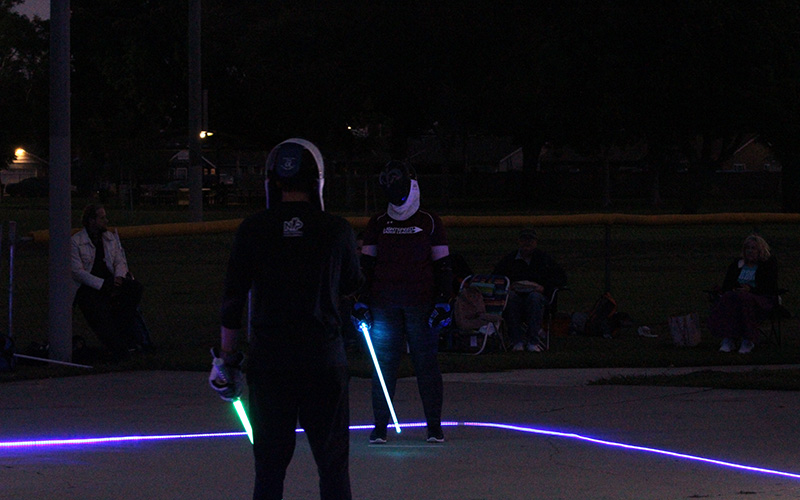 BUENA PARK, California – A not-so-long time ago in a galaxy far, far away, a group of lightsaber-wielders left exile to converge in an epic battle of the heroes.

Although the evil of COVID-19 remains unvanquished, for the first time since the start of the pandemic in 2020, the Lightspeed Saber League held an outdoor tournament, allowing saber-to-saber combat while maintaining the recommended 6 feet of distance.

The league consists of “Star Wars” fanatics who, in the spirit of the endless battle between good and evil embodied in the franchise, compete in lightsaber fencing for sport and fun. All ages – from fans who were raised on the epic film series that first hit big screens in 1977 to those raised on “The Clone Wars” TV series that debuted in 2008 – competed for interstellar bragging rights.

After months of studying the game tape from the film episodes I through IX, the Saber League met and competed for four hours on Oct. 23, with star appearances from some of the top-ranked saber fighters in the Lightspeed Saber League’s official national rankings. The official rankings are separated into cadets (young adults), men and women. The event awarded competition grades only, which go into the ranking system.

One of the competitors was Thom deMartino, who wields a red blade of a Sith lord. A superfan who remembers going to see the original movie as a kid, he doesn’t have any formal fencing or martial arts training. But when he ignites his saber, he becomes the sixth highest ranked fighter in the national men’s ladder for the league. 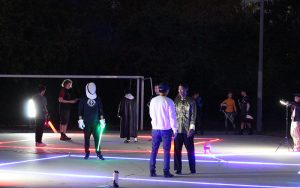 Each match had two judges, who deliberated on which competitor struck first and whether any illegal hits were made. (Photo by David Rodish/Cronkite News)

“I went to go see ‘Rogue One’ in theaters and there were a bunch of people taking pictures after the movie, and one handed out a card with a QR code and it turned out they were a member of a little lightsaber fighting club around the corner from me,” deMartino said. “So I went and started doing that, then I found that there are different branches of lightsaber fighting.”

He quickly latched onto the Lightspeed Saber League for its fast and agile style of combat. Other saber leagues allow more contact, but require more padding and safety equipment. In most leagues, stabbing is completely banned as the blades are glass and could be fatal if broken. These lightsabers are not quite as infamous for cutting off limbs as they are in the movies.

In the star system of Tempe, Arizona, the AZ Saber Club competes in a similar style to Lightspeed. While both have fighting rules like no stabbing attacks, the AZ Saber Club is a bit more strict in the types of attacks allowed and where on the body an attacker is allowed to make contact. Because of the hit zone requirements, the members do not need to wear armor like Lightspeed Saber League requires.

“To put it simply, we are a mixed martial arts lightsaber fighting club,” said Steve Sanders, president of AZ Saber Club. “The main mentality is we’re a bunch of students having fun and we don’t want anybody getting hurt.”

AZ Saber Club, which no longer is affiliated with ASU, has met outside Tooker House dormitory throughout its six-year existence. The group has seen a major influx of new members, forcing Sanders to rent out all seven of his personal lightsabers and the club lightsabers, which he says “is something we have never had to do.” Lightsabers can range in price from $60 to more than $300, with a wide array of customizable options and add-on accessories.

After months of pandemic precautions, both groups are starting to return to competition.

“We started classes on Zoom and we realized there are drills we can do without having an opponent,” said Brandon Nease, a high ranking member of the Lightspeed Saber League based in Southern California. “We tried to figure out what does a fencer need to have, was it the blocks, was it types of parrys or attacks.”

The league created eight training sequences that helped inexperienced members submit training videos that could be sent in to be critiqued by the Lightspeed experts around the country.

In addition to the training sequences, the league worked on Zoom sessions to improve blade work and some strength training. In February, the group started working in parks and now are back to hosting tournaments.

“It’s nice because our lightsabers are about four feet long, so with two lightsabers we’re six feet apart with masks and secondary masks, and we’re able to meet outside and get back to fencing,” Nease said. “It’s really great to be out again and having a tournament.”

For the competitors, finally getting back to their hobby is all that matters.

“It’s a great little community here,” deMartino said. “There’s a ton of support here. If someone breaks a blade, someone will say, ‘Here, borrow mine.’”