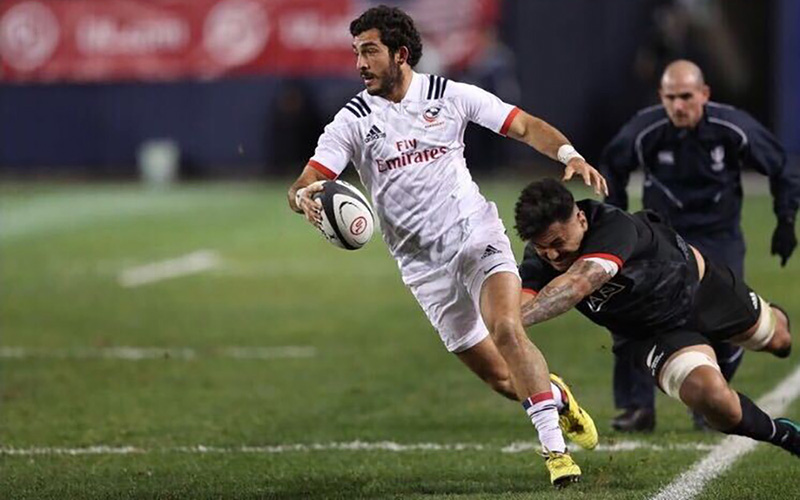 Tucson native Ryan Matyas plays professionally for Major League Rugby’s San Diego Legion, but said the chance to play for the U.S. national team gives him a bigger platform to spread the word about his sport in Arizona and the rest of the nation. (Photo courtesy Ryan Matyas) 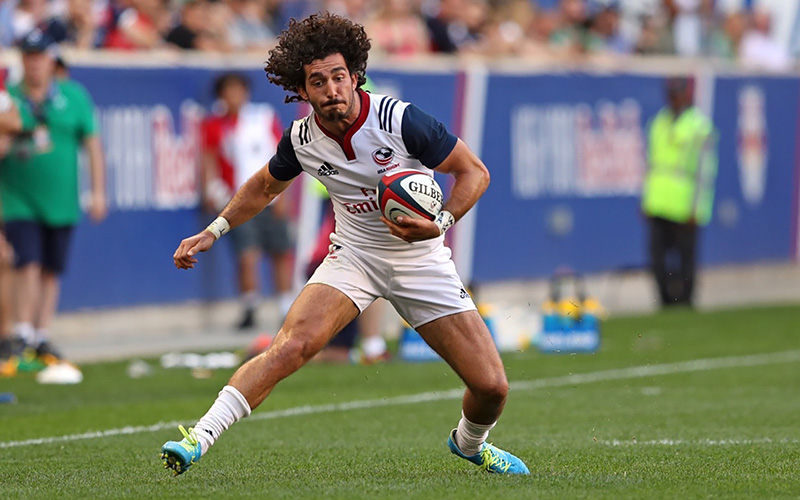 Tucson native Ryan Matyas is back on the U.S. national team after a four-year lull, suring which he worried that he might never play for the Eagles again. His latest call-up was “extremely overwhelming.” (Photo courtesy Ryan Matyas)

WASHINGTON – Rugby has taken Ryan Matyas all over the world, but when it comes to the game he will be playing Saturday, the Tucson native quickly runs out of superlatives.

“It’s huge, it’s massive, it’s a colossal stage … I don’t know a bigger word, but if there’s if there is you can edit that in,” Matyas said with a laugh, as he described Saturday’s match between the U.S. national team and the vaunted New Zealand All Blacks.

The inaugural 1874 Cup at FedEx Field will be the fourth matchup ever between the two teams and the first since 2014. The stage couldn’t be bigger, and Matyas wouldn’t want it any other way.

“It’s no secret they are the number one team in the world,” he said. “It’s going to bring a lot of eyes and a lot of attention to our sport.”

It’s also something of a comeback for Matyas, who will make just his second start for the USA Eagles in four years. He plays professionally for the San Diego Legion, but was beginning to doubt he would ever play for the U.S. again.

“Mentally, I’d process like, ‘That time of your life is done,'” he said. “‘Your international rugby career is over, you’ve been out of the team for three years, you missed the World Cup’ … it was just a blur.”

So it was “extremely overwhelming” when he got the call to play for the U.S. team against Canada last month. He figured he would be used as a tackle dummy in practice – which would’ve been fine by him.

“I need to be whatever that is that’s … going to help push the Eagle jersey forward,” he said this week.

But he’s not riding the bench: Eagles head coach Gary Gold and staff think Matyas can push the jersey forward as a starting wing against the All Blacks.

He will be doing so in “the largest rugby event in North America at least since that Ireland/New Zealand match” in Chicago in 2016 – the last time the All Blacks played in the U.S., said Chris Dunlavey, owner of Major League Rugby’s Old Glory DC and one of the event’s organizers.

Since the 2014 game, the All Blacks have compiled a 84-8-5 record and that dominance showed Saturday with a 104-14 win over the Eagles, who were coming off a loss to Uruguay earlier this month. Matyas scored the second of the Eagles’ two tries, midway through the second half.

Organizers plan to make the 1874 Cup – named for the year of the first recorded rugby match in North America – a regular event in Washington, D.C. It is part of USA Rugby’s plans to court the world’s best teams and show off infrastructure in the U.S., which has announced bids for the men’s Rugby World Cup in 2027 or 2031 and the women’s in 2029.

For Matyas, getting the call-up to the national team is one way to inspire the next generation of players, especially from Southern Arizona and other areas where the game is not as common as other sports. His presence on the pitch shows that it’s possible for players from nontraditional rugby communities to make a career out of the sport.

His own journey began as a teen when he played with the Tucson Barbarians, a youth club where his dad was a coach. After he and his dad saw the 2007 Rugby World Cup in Cardiff, Wales, he talked his way on to a club team there, the Tundu Rugby Football Club.

As a 20-year-old in Wales, Matyas met All Black star Jerry Collins who was playing professionally nearby. He still remembers when Collins mentioned in passing how he thought Matyas would make it big.

“He’s like, ‘Oh, you’ll play for the U.S. You’ll play against the All Blacks’ and I just envisioned myself across from him,” Matyas said, rubbing his forearms and shaking his head. “I’m getting goosebumps.”

After a year in Wales, he came home to play at the University of Arizona, and followed that with amateur stops in Tucson, Tempe and other club teams in the U.S. and New Zealand before going pro with the Old Blue RFC in New York. He’s been playing with the Legion since 2018.

Through it all, he remembered the people who helped him along the way, and he wants to use his platform as a pro to encourage the next generation of players.

“People invested their time and their effort in me, and if I don’t do the same thing, then I’m not I’m not pulling the game forward, I’m not helping it advance,” he said. “They’ve entrusted me with a lot of knowledge and wisdom – and, trust me, I still have a lot to learn.” 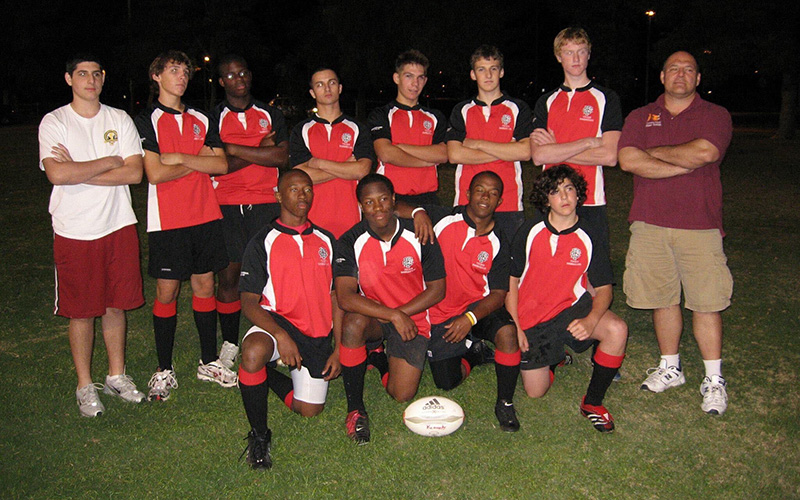 Ryan Matyas will play with the U.S. national team, the Eagles, against the New Zealand All Blacks Saturday. But he got his start in his home town of Tucson, seen in the first row, right, in this 2006 photo of the Tucson Barbarians. (Photo courtesy Ryan Matyas)

He hopes to help grow the game at both grassroots and pro levels.

“What I have learned I definitely want to make sure I pass it onto the next generation because … that’s how our game grows to be a hopefully better-paying one at the professional level, but a more nationally recognized sport, and hopefully we can get it into high schools and colleges,” he said.

Rugby is not sanctioned by the Arizona Interscholastic Association for high schools, nor is it NCAA-sanctioned. So it’s up to club teams like UArizona’s and other local organizations to foster the sport’s growth.

Matyas thinks that putting on high-profile matches like Saturday’s tilt can help, by giving American fans what he thinks they deserve.

In the meantime, Matyas is working to “pay it forward” to the rugby community by volunteering to coach the Tucson Rugby Club team when he’s back in town – and pay it back to the adults who helped him as an up-and-coming player.

“There are guys who took time to coach me, drive me to practices, give me their time you know help me out with strength and conditioning programs or teach me how to pass,” he said. “There were other people who helped develop me and just by giving me their time … they wanted to help, they wanted to see me get better.”

John Rouff, head coach of the Tucson Rugby Club’s men’s team, said the group appreciates when a pro player comes to help but that Matyas takes it to the next level. He is not there just for pictures and autograph sessions, he’s there to coach.

“There’s times that he’s asked me, ‘Is there anything that you want me to emphasize? What do you want me to focus on with the guys this weekend?’ as he’s coming in just doing a random pick-up weekend,” Rouff said.

He said Matyas “fits a different mold than a lot of international or professional athletes.” 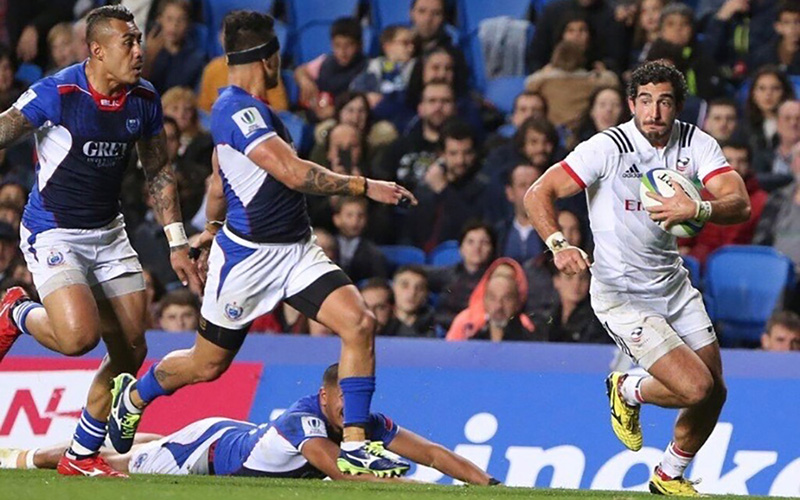 Tucson native Ryan Matyas has played rugby all over the world, but is most excited that he will be part of the U.S. national team that will face the legendary New Zealand All Blacks in Washington Saturday. (Photo courtesy Ryan Matyas)

“He’s well aware of where he came from and he’s happy as hell to promote that and celebrate Tucson and he brings it back all the time,” Rouff said.

He calls Matyas part of the “next generation” of players from the state. Of USA Rugby’s four senior national teams – men’s and women’s 15-player and seven-player squads – five are from Arizona: Matyas, Maceo Brown and Brett Thompson of Tempe, Amy Talei Bonte of Tucson and Kasey McCravey of Scottsdale.

Matyas, Bonte and Thompson both played for UArizona’s club rugby teams, something Wildcat rugby coach Sean Duffy says current and future players notice. He said Matyas is “one of those guys that embodies what we want our current athletes to be.”

The success of alumni like Matyas and Thompson is “stoking conversations with institutional stakeholders” on campus, he said, “putting the spotlight back on us like ‘Hey, we want to have more Ryan Matyases, Duffy. What do we need to do to do that?'”

Matyas knows that rugby is still largely unknown compared to other sports in America, but while he won’t “trash any other sports, but I just think we do it better.”

“We play very hard, but we also have sportsmanship and when the game’s done, there’s no trash talk and there’s no in your face stuff; it’s for the pure joy of the sport and respect out of the competitor because … we’re more alike than we are not alike,” he said.

Rouff will be cheering on Matyas and the Eagles this weekend from Tucson, wearing his brand-new jersey, which he debuted during a phone interview Tuesday.

“No joke at all, I’m going to work out at the gym and then I’m going to practice after this and I’m literally wearing my Ryan Matyas jersey, because it just came in the mail last week,” Rouff said. “He’s a warrior.”