PHOENIX – As the Phoenix Mercury tried to tie a bow on a season that ended in disappointment against the Chicago Sky in the WNBA Finals, the Sky were throwing some shade their way and the WNBA had another surprise in store – a $10,000 fine.

The Mercury hoped to return home with a chance to play another game in the WNBA Finals, keep their hopes for a fourth league championship alive and perhaps extend the career of their star, Diana Taurasi.

Instead, they returned to find out Tuesday that the WNBA had levied what is reportedly the largest fine ever issued by the WNBA for a media violation, and they enter an offseason of uncertainty about the 39-year-old’sfuture.

The WNBA issued the fine because Mercury players refused to speak with reporters after their Game 4 loss to the Sky that ended their season. League rules require that teams make at least two players available to the media.

“We just had to take a minute, and that’s what we did,” Taurasi said Monday during team exit interviews. “The magic slipped away from our hands pretty quickly and reality hit, and we were a pretty devastated team.”

Meanwhile, the Sky were celebrating their championship in Chicago by putting a busted door on display at their “Skytown Championship Rally” Tuesday. The team’s official Twitter account posted a photo of the door, broken by Taurasi at Wintrust Arena after Chicago eliminated Phoenix in Game 4, according to a report from The Next’s Alex Simon.

As Taurasi put it, the magic escaped the Mercury quickly. They led by as much as 14 and relinquished an 11-point edge heading into the fourth quarter. So the collapse explains Taurasi’s frustration, and she didn’t deny breaking the door during Monday’s exit session. She did confirm one thing, though.

“There were a lot of doors in there,” Taurasi said.

We have a special guest appearance at the #skytown Championship Rally. 🚪 pic.twitter.com/r8cljR21U1

The mahogany door with a sizable crack in the middle sat on stage, displayed behind a disc jockey as the Sky paraded through Chicago and finished with a rally, where they hoisted the championship trophy.

Taurasi came out with an edge in Game 4, picking up a technical foul within the first five minutes for barking at the referee to blow the whistle. Then she got into a shoving match with Chicago’s Kahleah Copper, where the eventual Finals MVP picked one up herself.

That exchange came after Taurasi was fined $2,500 for pushing a referee in Game 2, an infraction that could have resulted in a suspension.

It’s possible that those will be the last impressions Taurasi, who turns 40 next June, leaves on the court. The league’s all-time leading scorer said she’ll mull over her decision to retire over the next eight months.

“I feel like I’ve been at the end of it for a while now,” she said. “When you have a lot of time to think about basketball in the future a lot of thoughts go through your mind, but we’ll see where it goes.”

The Phoenix Mercury’s Diana Taurasi, right, hugs Candace Parker of the Chicago Sky after Game Four of the WNBA Finals. The loss by the Mercury was one of several storylines that prompted national discussion. (Photo by Stacy Revere/Getty Images)

Taurasi missed half of the regular season dealing with injuries to her sternum, ankle, hip and foot.

Despite that, Mercury coach Sandy Brondello said she believes the 17-year veteran definitely has enough left to return.

“I’ll support Diana whatever she chooses to do, but I do think she has another year for sure,” Brondello said. “She wasn’t 100% healthy. Her ability to go out there and perform at the way that she did, hopefully that will motivate her to go one more year.”

In 2020, Taurasi signed a two-year contract that would expire after next season, and her teammates are hopeful that she runs it back at least one more time with a healthier group.

“We don’t want to see Dee go,” said Mercury center Brittney Griner. “I haven’t heard anything, so I’m just planning on seeing her right there, with the bun, at center court when it’s time to start training camp. But with the core of this team . . . it’s strong. It’s a good core.”

Taurasi’s backcourt mate Skylar Diggins-Smith said she and the team would be excited to have Taurasi back.

“Yeah, me and everybody else,” Diggins-Smith said. 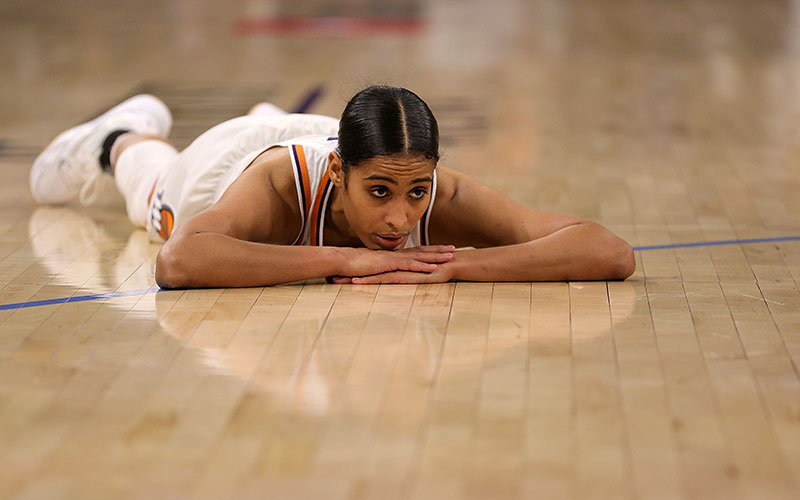 The Mercury’s Skylar Diggins-Smith reacts after a foul call against Chicago, but her look also reflects the mood of the team after a season-ending defeat to the Sky. (Photo by Stacy Revere/Getty Images)

Diggins-Smith joined the team in 2019 hoping to win a championship with Taurasi.

“I learned a lot from her,” Diggins-Smith said. “I really felt like this was my coming-of-age year. I was really able to turn the corner, and it was a big part of my maturation process and being able to touch the Finals.

“She has the blueprint and really gave me the blueprint of what it takes to get there. Regardless of what she decides to do, she has nothing to prove.”

The Mercury and Taurasi proved to be resilient. Dogged by injuries, they needed a surge after the 2020 Tokyo Olympics break to get into the playoffs and entered as a No. 5 seed. Phoenix played two single-elimination playoff games and beat No. 3 Las Vegas in a winner-take-all Game 5 to reach the Finals.

“I’ve never seen a team really fight this hard,” the three-time WNBA champion said. “’I’ve been, obviously, on a lot of really good teams, I’ve been on some OK teams, but this team had a grit that’s incredible.”

Diggins-Smith said there is no question about Taurasi’s ability to keep playing if she chooses to. She even joked that she’d like to see two more years from her teammate.

“Whatever she decides, there’s no doubt about ability or anything like that,” Diggins-Smith said. “It’s just a decision that’s up to her, and I support her either way.

Taurasi was circumspect when a reporter asked about her legacy in the game.

And it may just be all out there.