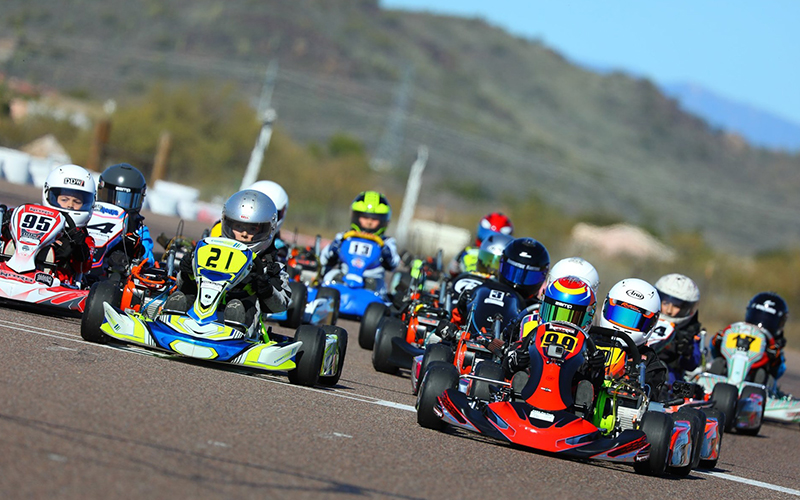 After a long day at school, children often head to the Phoenix Kart Racing Association track to compete with their friends in go-kart racing. This is the same way many NASCAR and Formula One drivers started. (Photo courtesy of Aimee Sarchett) 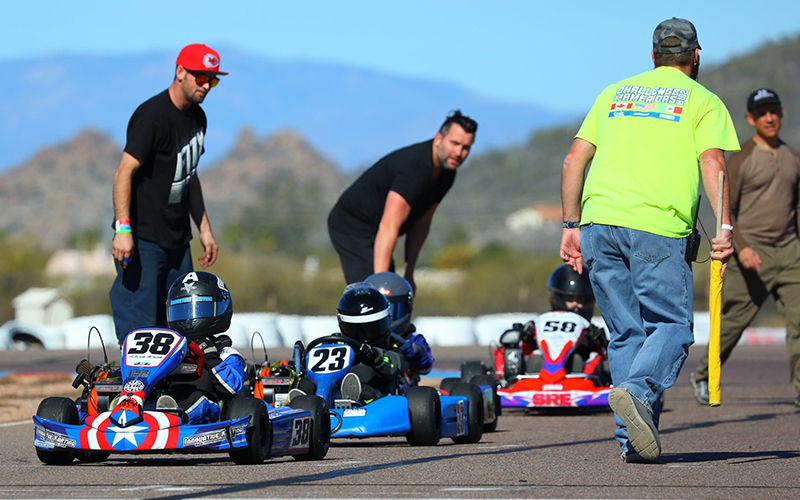 Although they admit they are often nervous, parents love to stick around and watch their children race around the PKRA track. (Photo courtesy of Aimee Sarchett)

GLENDALE – On any given day, high-end motorhomes sit in the parking lot next to rusted pickup trucks. Parents tugging the hands of eager kids mesh with seasoned drivers looking to hone their craft.

That’s the appeal of the sprawling asphalt track facility that is home to the Phoenix Kart Racing Association. It’s both an ideal entry-level spot for the next NASCAR driver in Arizona and a nonprofit club for those interested in racing go-karts in a friendly atmosphere.

“It’s extremely polite and family-oriented,” said Brad Jacks, a PKRA executive board member. “My oldest daughter was in competitive gymnastics, which is super cutthroat. But when we came to PKRA, it was a welcome change.”

Jacks and his daughter Riley started at PKRA after arranging an arrive-and-drive at the Glendale track. An arrive-and-drive is similar to walking into a restaurant without a reservation, showing up on a first-come-first-served basis, and racing around the track. 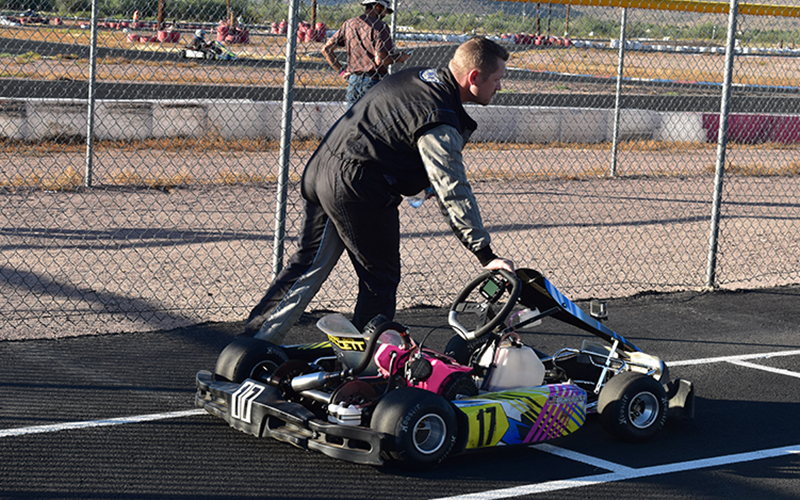 Brad Jacks and his daughter began at PKRA after an arrive-and-drive. These days, Jacks competes in the masters level every weekend. (Photo by Nick Zeller-Singh/Cronkite News)

The Jacks aren’t the only father-child combo competing at the track. David Hilburn competes at the master’s level while his son competes alongside his friends.

“It’s awesome to compete with my son because he has been racing since he was 5,” Hilburn said. “It is both the most amazing and terrifying thing as a parent. When they go around the corner three-wide, you go like ‘Oh my gosh!’ and then they make a pass and it is the most exciting thing to cheer your little one for.”

With several families bonding at the track, the friendly atmosphere is omnipresent. Third-generation driver Micah Hendricks said the environment was similar to kids playing in their neighborhoods.

“The atmosphere is like what I hear about the old days where you come home from school and you go play until the lights came on,” Hendricks said. “Everyone will help each other out. One of my main competitors, I helped him with a setup change on his kart before the championship race. It is just a really good family environment.”

The atmosphere attracts all types of racers. For adults, it is a perfect spot to get their feet wet. PKRA is open six days a week, Monday through Friday for arrive-and-drives and practicing, and Saturdays for official races. The racing groups range from Junior Novice to Masters.

“We just got the track surface redone, it makes a world of difference,” Hilburn said. “PKRA also has dedicated days for novices to come in and get an atmosphere that is safer for them. Plus, if you ask anyone a question, they are friendly enough to answer it.”

As for the younger competitors, PKRA provides the closest thing to a little league racing experience. It is the easiest and cheapest entry into the racing scene, Jacks and Hilburn said. However, if the child is ready to make the leap into the top-tier racing leagues, PKRA offers that, too.

Karting is often a stepping stone to the higher ranks of NASCAR and Formula One. Some of the best-known NASCAR drivers, including Tony Stewart, Jeff Gordon and Danica Patrick, started that way. So did Arizona drivers Alex Bowman and J.J. Yeley.

“It can be fun or competitive because you have people who just started and others who are at the national level,” he said. “On race days, you see the whole pendulum. You have guys with their half-million dollar motorhomes and then others showing up with a 1994 Ford Ranger.”

Whether the competitor comes in a customized go-kart or shows up with a rental, everyone is treated the same. From age 5 to first-generation racers, PKRA provides the environment to spend time with friends and family, even while going three-wide around the corner.