PHOENIX – Vice President Kamala Harris took a short tour Monday of Lake Mead, which has reached historic low water levels thanks to relentless drought and rising temperatures, and she used the opportunity to pitch the Biden administration’s infrastructure and climate plans and how they could address shrinking water supplies in the growing West.

Twenty-five million people in Arizona, Nevada, California, and Mexico receive water from Lake Mead, which is about 35% full. Harris said investments need to be made in climate resilience through the Build Back Better agenda and the bipartisan infrastructure deal to help millions of people who are living in drought.

Water supply and drought preparation for the West are two major points in the bipartisan infrastructure deal, which would invest $4.6 billion in aging infrastructure and rural water projects and over $2 billion for water conservation, recycling, and storage. 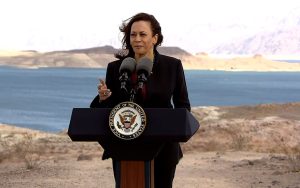 Harris touted the infrastructure package and the Build Back Better plan as job creators, and a response to climate change.

“The Build Back Better agenda will help us tackle the climate crisis with investments in clean energy and electric vehicles, and so we can reduce emissions. And why do we need to reduce emissions? Because that is part of what is contributing to these drought conditions,” Harris said.

Harris said by passing the infrastructure bill and the Build Back Better plan, a “sense of responsibility” can be taken to satisfy the needs of people who rely on Lake Mead for water. And it’s not just about having water for drinking and growing crops, but also generating hydropower.

Sarah Porter, who directs the Kyl Center for Water Policy at Arizona State University’s Morrison Institute, said the Build Back Better plan “isn’t going to solve” Arizona or the Southwest’s water shortage. A lot of investments for greater water efficiency have already been made, she said.

Today I’m heading to Lake Mead in Nevada to discuss the climate crisis–and why we must make historic investments to not only create jobs, but preserve our planet for generations to come. pic.twitter.com/VDk1BoYcBN

Projections made by the Bureau of Reclamation show Lake Mead and Lake Powell upstream could reach “critically low reservoir elevations” sooner than originally projected. A first ever water shortage in the Colorado River was announced in August, federal officials said.

Lake Mead is the largest reservoir in the U.S., formed when Hoover Dam on the Colorado River was completed in 1936. The reservoir supplies water to seven states and northern Mexico.

The lake, for the first time in its history, is under a Tier 1 water shortage, which cuts water releases to Arizona, Nevada and Mexico in the coming year. The low levels come against a backdrop of rising temperatures and ongoing drought – 34% of Arizona is in severe to exceptional drought, according to the U.S. Drought Monitor. 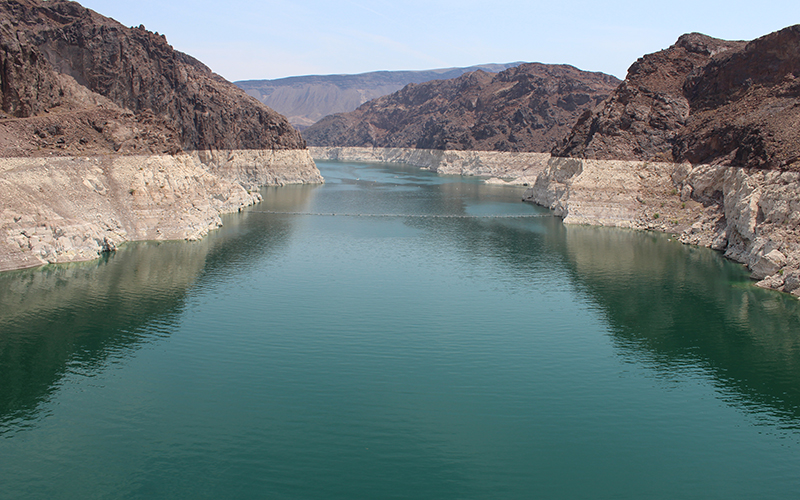 Water levels in Lake Mead, pictured, and Lake Powell are already at historic lows and could go even lower than expected according to recent projections. (File photo by Luke Runyon/KUNC)

“What we’re looking at with Lake Mead is this year, a reduction to Arizona of over 500,000 acre feet of water,” Porter said. “It’s almost a third of the amount of water that is delivered via the Central Arizona Project to Phoenix, Pinal County and Tucson. Most of the shortage will be absorbed by agriculture and Pinal County.”

Already, U.S. Senate and House committees have held hearings this year to better understand the impact of drought on water supplies in the West and what measures can be taken to help. The latest hearing, a subcommittee of the House Natural Resources Committee, was Friday.

​​”According to the U.S. Drought Monitor, even now in October, a large majority of the western United States is experiencing above average temperatures and severe or extreme drought conditions,” Tanya Trujillo, the assistant secretary for water and science of the U.S. Department of the Interior, told the subcommittee. “Although the Rio Grande and Pecos basins and parts of Arizona received some monsoonal rainfall this summer, the temporary relief has not reversed the more than two-decade drought impacting the region.” 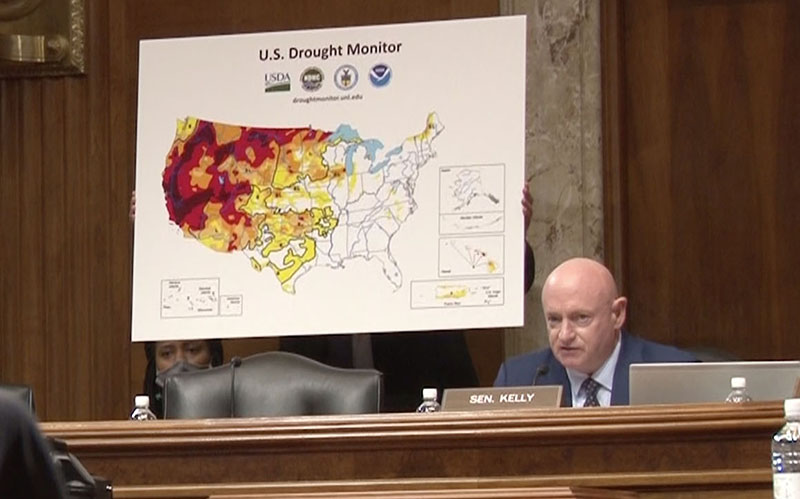 Trujillo said a “challenging water supply situation exists in much of the West.”

The Bureau of Reclamation released a five-year project in September that shows an 88% chance that Lake Powell, which straddles the Arizona-Utah line and is the country’s second-largest reservoir, could fall below 3,525 feet by next August – a level that would endanger hydropower production.

“We need to take more actions in both Lake Powell and Lake Mead,” Thomas Buschatzke, director of the Arizona Department of Water Resources, told Cronkite News in September. “More actions mean finding a way to get people to conserve their water, or more mandatory reductions to stabilize the lake.” 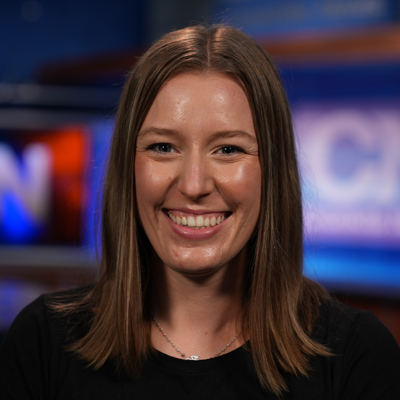